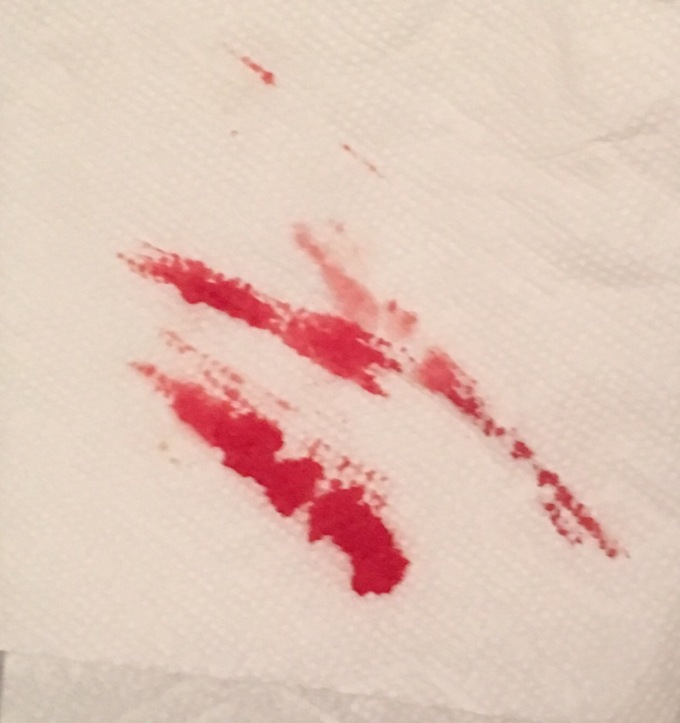 The latest of my accidents, got cut by a knife my brother’s friend was using to chop onions.

Before that, 2 nights ago, pretty sure I broke my little toe, hit it hard against a door. It’s black and blue.

Before that, 4 nights ago, while climbing stairs, tripped and pitched headfirst into an iron pipe. The sound my head made hitting the pipe sounded like a gunshot. Pretty sure I have a concussion, constant headache and forgetfulness.

Karma? Bad luck? WTF? So tired of being accident prone. Whatever it is, just quit it! Leave me alone.

let stuff get to me so much? Texting my sister again and she informed me that 5 of her friends’ kids who were near mine ended up with lice, then she started in on how her friend M said me using the mayo treatment is all wrong..And I tried to defend my right to make my own choices as a parent and pointed out how hard it is to keep up with the lice because my kid has scalp psoriasis and is always digging at her head…Now my sister’s gone silent after getting pissy and..

It’s pretty much made my anxiety shoot upward and my mood to go downward. Which after having to hit the food pantry cos we’re so broke and paypal won’t work cos I’m using a flipphone cos smart phones COST FUCKING MONEY I DON’T HAVE THUS I HAVE NO APP…then my new med causing a grueling stomach pain amongst other nastiness…I didn’t think I could feel much shittier. Enter family. One minute we’re texting about the awesome show Blood Drive and the next I feel under attack cos my kid created a lice epidemic and obviously it’s my fault for not being more vigilant, for not having the money to pour chemicals on my kid’s head, for trying to defend my choices and my right, as a parent, to make them, in spite of what her friends say.

Now I view my kid as a ticking time bomb just waiting for more lice and like I have to keep her locked away and why my sister would lay this nasty guilt trip on me all the while playing miss innocent…Yeah, my kid had lice, other kids got it, but the life cycle of nits,one of the other kids could have had it for up to 14 days before nits hatched so it could have been them, too. But no, it’s always me and my kid and I am just..I don’t do confrontation, it creates panic which makes me act like an imbecile. And here I am 44 years old and being made to feel about 12 and irresponsible because I didn’t know my kid had head lice AGAIN…And I do feel stupid and immature for getting so bent, it is what it is.

I think my kid telling my about her nightmare that I started spanking her and wouldn’t stop cos my meds quit working and grandma suggested I do that sort of thing..I think it’s shattered what little faith or trust I had in my entire family. But that’s ok, cos Spook informed me my mother called me a bitch and my mom will deny it and maybe my kid is lying but isn’t that the point…they adore her but she’s quick to turn on everyone to save her own ass including them. She may be young and cute but I am SICK TO THE EYEBALLS OF EVERY SINGLE DAMN PERSON GIVING HER A FREE PASS TO ACT LIKE A JERK. The only person who gives any perspective is R, which is fucking sad. But yeah, he raised 3 and he says her behavior is borderline psychopathic the way my family has taught her to manipulate and mistreat me.

Why do I let it get to me? I need to grow up, right? Funny,I was okay til…Okay, I felt cornered as a bad mother over starting the lice plague so maybe I just don’t like the truth and I am lashing out to avoid responsibility…Bloody hell, that’s crap. Maybe I don’t like having ten different people chime in on my parenting, but who the hell does.

To add to my stress the nurse practitioner’s office is on me about getting the blood work done again and for fuck’s sake, I TOLD the woman I stopped taking the lithium cos of the weight gain and it making me sick but because she didn’t listen I have to start taking it again to get a blood draw and get her off my dick. I miss the shrink, he got my hate of hospitals and rarely required bloodwork. Maybe it’s safety and smart but when a patient says I went off of that cos of the side effects and you don’t listen…I don’t need this shit.

Oh, well. I had a couple of not horrid days while my kid was grounded for defying me six times in a single day. When she finally quit blaming everyone else and owned her mistakes, I ungrounded her. Now I just cringe cos every friend who comes near is a lice time bomb, too. My problem is other people stress me out. And that makes me an asshole, fine. But it’s like my former thick skin has thinned out to saran wrap.

I doubt it’s gonna get better today. When the nurse’s office called I mentioned the stomach pain since starting Trintellix and they will call back and probably say give it more time or that side effect isn’t listed so it’s something else you’re doing…Round and round my brain goes and misery is at every turn.

Why do I even care?? I didn’t used to. Maybe mood stabilizers ruined me by giving me the conscience and boundaries mania obliterated. The highs weren’t ass shitty as constantly feeling guilty and shitty.

But then it’s likely all just me and sometimes I just want to go to sleep and not wake up.

5 more weeks. I just gotta make it that long, school will start, I won’t have to be on duty 24-7 as entertainment director and resident bad guy, she will be occupied..Just gotta hold out, a lot of sanity will return with the anxiety going down. Til them here I am dangling off the edge of a cliff by a pick axe, hoping the side of the cliff doesn’t give way. 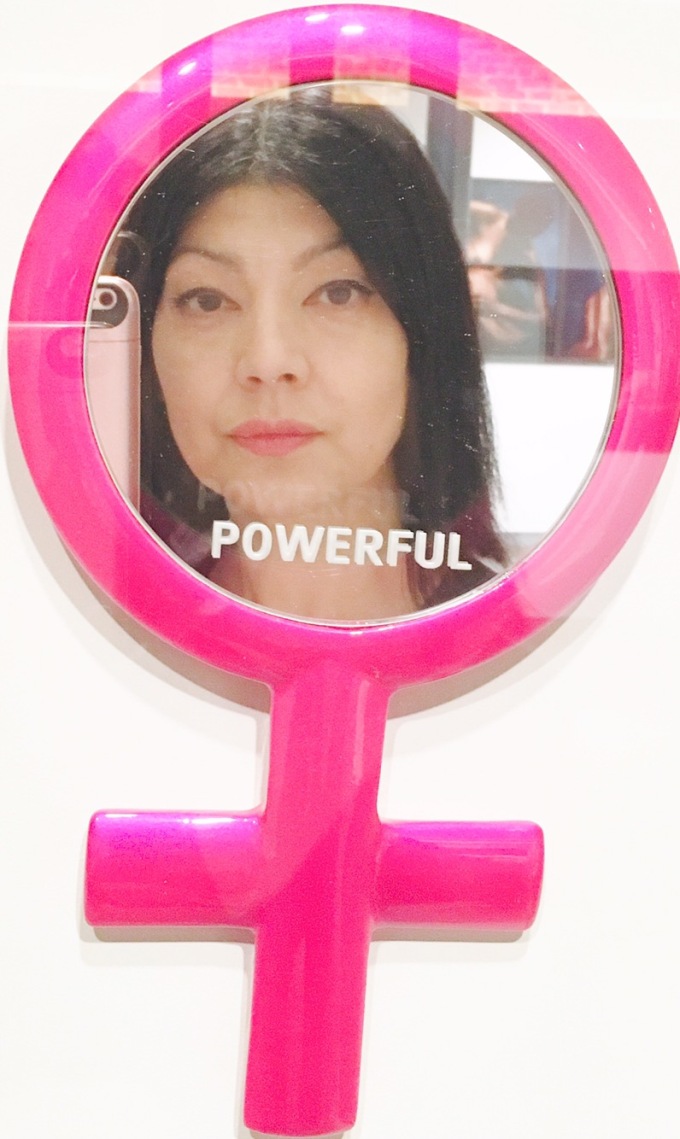 It will take me through twisted, tortuous roads, it will show me in sickening, horrifying detail what can go wrong and convince me that it all will go wrong.

It will hijack my brain and my mind for half the day. Yes half the day. For the rest, it will grant me respite. I will be free to be me for the second half of the day. I will make the most of it. I will make plans of how to defeat anxiety tomorrow. “Get up, don’t listen to your thoughts, get out and go for a brisk walk. Set your coffee out on your bedside table and drink it the moment you open your eyes, watch something funny on YouTube, etc. etc…”

I won’t let it beat me. It’s not real. And then the thought sneaks in: Isn’t it real? Aren’t all those things possible? God if anyone is a master at playing mind games, head games, it is anxiety. And I hate it that it’s using my head as the playing field.

Tomorrow I will go home and I will be the unwilling star player in this god awful, sick, twisted game. All the while, I’d rather be dancing.

The Nitty Gritty of Chronic Illness

The word “grit” is a pretty versatile one. It can describe small particles of dirt or sand, courage or resolve, or the action of gritting one’s teeth. All three of these meanings can apply in the world of chronic illness. … Continue reading →

Sometimes I just want to break down and cry

At the exquisite beauty of life

At the hideousness of it

At the warmth and tenderness

At the frigid, iciness

At the loving arms enveloping me

At the cruel feet kicking the life out of me

At my terrifying, heartbreaking love for my precious child

At the fear and terror that everything will go wrong

At the family gatherings with love, care, and compassion. Loving togetherness

And the aching goodbyes, the pangs of missing each other, “Oh we were all together just yesterday!”

My heart cries out at your tender touch

Time to up the Lithium? Yes, if it gets any deeper than this.

Beauty and feelings mean nothing to me if I’m in the hospital in a freaking manic phase.

So I talked with my counselor about how down and bored I was feeling and we brainstormed on ways to try to figure out what I could do.  I really need to talk to Bob and try and figure something out with him that he can live with.  But I’m scared to, even though I have to.   We will see.