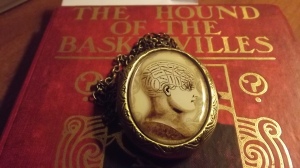 “The Holmes side is … crawling with spies. The Mycroftian branch … spends so much time undercover, they never travel anywhere without a duvet.” – Dr Margeurite “Daisy” LeStrade, from “Sherlock Jones & the Hound of the Basingstokes”.

Today’s tune is “A Cup of Brown Joy,” by Professor Elemental. Because you can’t get much more Steampunk, and jolly, than this. Plus, I love tea: 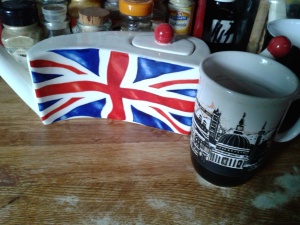 A cup of brown, caffineated joy.

Dressing up at a Steampunk, Doctor Who, Cosplay, etc, convention, can be a way of letting our child-self out to play, in a safe environment. Safe, because we’re surrounded by other people who are also playing in the same colourful sand pit. Plus, our play time is limited: just for that day, that weekend, that week.

Alternatively, are adults who dress up seeking ways of covering up the grief of living? Of gift wrapping our fear of mortality, and loss?

If you’re wondering where the bit about grief came from, in a blog about creating a Steampunk character, and her costume, well, join the club. I was planning to chat about my initial steps to put together a costume for myself to use at several Steampunk festivals this year. Here’s what I’ve got for Doctor Daisy LeStrade so far:

I also have a handkerchief I carried at our wedding, and which no lady would be without (because, otherwise, she cannot properly deal with a touch of catarh): 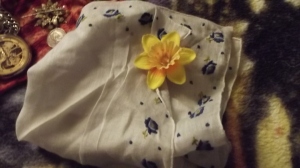 Someone who knows me well, or just follows this blog, will know I’ve had a long(ish) running interest in Steampunk. I love colour, creativity, and people having a good time in ways that doesn’t harm anyone, including themselves. And Steampunk has this in teacups, with an added emphasis on manners. I’ve attended at least two, more likely three, of the Doncaster Steampunk conventions. Cross fingers, Dr Daisy and her costume will be making their debut at this year’s, which is on 8 July. 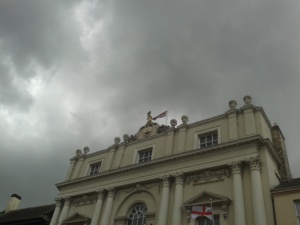 My amateur photographer side – very amateur – is thrilled at the thought of taking photos of people in full Steampunk attire in such a lovely old Georgian building. Sadly, it looks like my hopes of having a stall with other writers is unlikely, as the trade off for such a historic location is fewer stalls than usual. So it looks like myself, my writer friends, & Dr Daisy are going to have to find another convention(s), if we want to sell books.

Those books include my upcoming collection, “A Yorkshireman in Ohio”, as well as “Koi Carpe Diem”.  Both include stories about Sherlock Jones, and his cousin Daisy, as well as artwork by the magnificent Tom Brown.

For the time being, though, all that’s going to have to wait, as I sort out my US taxes. It’s not something I like doing: indeed, it’s a major trigger for my mental health, which is a bit wonky just now. Has to be done, though. Still, it’s a beautiful day here in Donny, so at least I can escape to the garden, if and when things get a bit difficult.

Whatever you decide to do with your sunny Sunday, I wish you joy, and peace.

This entry was posted in Read Along and tagged mental health. Bookmark the permalink.