“The Quick Brown Fox Jumps Over The Lazy Dog”

Daily Prompt – Quicken That was one of the first lines I learned in typing class. Why you ask? Because it contains every letter of the alphabet. After I left university, I wasn’t sure what to do. My mother had … Continue reading →

So my youngest came in yesterday from school feeling bad, not wanting to go to dance.  SO I took her to the doctor today and she had a sinus infection. So we are getting her some medicine and what not to try to feel better this week.  No strep, so that was nice. I still feel yucky but will hold out until my appointment tomorrow. Hopefully that will go well.

But I sure do feel atrocious in the meantime.   I started coughing last night and couldn’t not get a handle on it, even with prescription cough meds.  I was up every four hours taking more of it untii I finally quit coughing.

We may Choose to Ignore Them

But, What’s the Fun in That?

It all started with butt boils.

Take a part of the human body rich in adipose tissue, add pressure and heat (as in sitting for long periods of time), and that body part will revolt—or become revolting.  Enough on that matter. 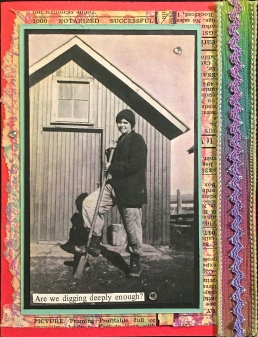 Next came a therapy session where we connected the dots between trauma and food as my drug of choice.  Since my diagnosis of Binge Eating Disorder, I’d set down my shame and guilt about being a Woman of Substance.  I’d become kinder, more accepting of my body.  But there we were, dredging up all that business, and I found myself disappearing.  My hands and feet went numb; a rushing sound filled my head; I seemed to leave my body and drift somewhere behind and above it.

Later, I learned what I’d always called this “shutting down” was technically dissociation—an altered state of consciousness that can include depersonalization, sensory and psychological numbing, disengagement, and amnesia.  Most people experience mild forms of detachment, like daydreaming while driving and losing a bit of time.  The more pathological end of the spectrum ends up Sybil-like with fragmentation of the personality.  It’s a coping mechanism—a way to keep the psyche safe when under attack, whether that attack is real or imagined.

Clearly, I had more work to do with this.  Or, as Megan reminded me, not.  I always have choices, and she is not the variety of therapist who requires excavation of Hurtful Things. 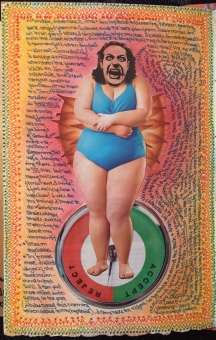 Soon after, as I sorted my old blog posts into potential book categories, I marveled at how I once worked so very hard at controlling my eating, how I celebrated small victories and believed I made tiny changes in my behavior.  And then I always gave up, as my endgame of losing weight could never be reached.  I started to wonder if I could ever push gently against the binge eating, if I could find a way to work with it like I’d found ways to work with bipolar disorder—gently, with acceptance and kindness, while still holding the worst symptoms accountable.  I had no idea how that might look, but I opened to the possibility instead of shutting myself away from it.

On my way to Orly Avineri’s workshop in Taos, I started reading Foolsgold by Susan Wooldridge.  In her introduction she says:

I began writing these pages when I decided to make a small collage box each day for a year with what I found on my walks—often the most ordinary, seemingly worthless bits of nothing.  That’s when fool’s gold became foolsgold for me, a field around us, or state of being, where everything can be transformed by our seeing and creativity.  Merged into one word, “foolsgold” describes a paradox, the value in what may seem to be worthless.  Foolsgold reminds us to look beyond appearances, even in ourselves.  What seems to loom in us most darkly may finally be what brings the most light. Everything can be transmuted by attention, play, love. 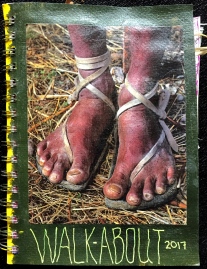 I used to walk a lot, then stopped as it wasn’t getting me to the destination I wanted.  If I had some different motivation to walk, like looking for art fodder along the way, I might be able to do it.  I let that idea sit in my hindbrain as I got my self to Taos.

One afternoon, Orly showed us a small art journal her nephew made.  An environmental crusader, all his art is made up of junk with space for sketches and ruminations.  Orly’s nephew had no concern for style, or balance, or making things look pretty.  His art was raw and powerful.  And very simple.

I can do that, I thought.  And as that realization settled in, my body demanded it.

It took a few weeks once I got home to jumpstart idea to action.  But now I have my WalkAbout journal, and every few days I set out with my big zip lock bag and find my material for the day. 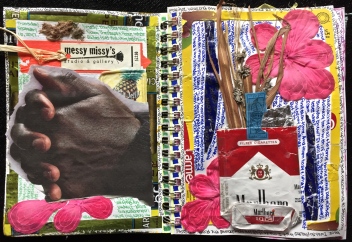 Change, even good change, can be stressful.  My rapid cycling has been spinning like a hamster wheel.  Some days the amount of trash among the trees and berms disgusts and weakens me.  I tell myself I can’t go out among all that thoughtlessness again.  But the hamster wheel keeps spinning, and I tie on my purple trainers.  After a couple of weeks of this, I’m learning to wait for fodder to signal me—light on shiny foil, strange lumps, a flash of color in the dunny weeds.  It gets easier and easier.  As does the art that comes after. 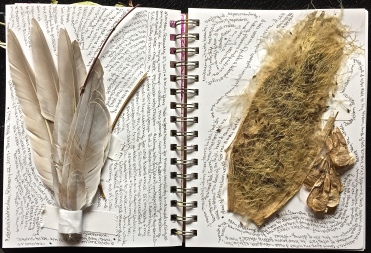 My butt likes that I’m moving more.  I make my WalkAbout pages in the evening when my binge eating is most bothersome.

I’m still on an Adventure.