Posted on February 5, 2017 by Sheila North | Leave a comment

I was quite glad I hoovered the carpet, the day before we had three paramedics in our bedroom. They weren’t there for any kind of hi-jinks: my idea of a good time doesn’t involve having three ECGs in the course of two hours.

Both the first paramedic, who arrived by himself in a car; and the other two, who came by ambulance, remarked on the number of books we have.

The first paramedic mentioned the books in passing. The other two said how nice it was, seeing all those books. You didn’t think it was too excessive? I asked, with a sigh of relief that no one had tripped over the book piles that march their way up our steep, ca-1890s staircase.

Oh, no, one of the paramedics replied. It’s much better than loads of empty kebab boxes. Do you see those a lot, or just with people who have suspected heart problems? I asked. I wasn’t terribly surprised when they said the latter.

Don’t look at me like that: I didn’t ring 999 for an ambulance because I thought I was having a heart attack. Those nice folks at 111, “NHS Direct” made the call.

As previously stated in this blog, I am not medically trained. However, I thought alternating pains in my stomach, sternum area, and lower jaw merited a 111 call. The words “heart attack” did cross my mind, but, all save the jaw pain was so mild, it barely merited the description “pain”. Plus, I didn’t have pains down my left arm, or what one of my first aid instructors memorably described as “a feeling of impending doom“. (1)

Ironically, whilst I know that feelings of anxiety can sometimes be mistaken for a heart attack, I was feeling pretty laid back that morning, after weeks and weeks of that old wheeze, depression and extreme – and I do mean extreme – anxiety. But that was then: that morning, I was feeling quite mellow. Well, as mellow as someone who’s mid-way through several loads of laundry can be.

Al the Cat, who supports his catnip habit by giving lessons in relaxation, and Mindfulness.

It was jaw pain which led to my ringing 111, and agreeing to wait for an ambulance. The pain was pretty bad, and I couldn’t think of anything which could explain it. I stayed calm, right up to when the paramedic on the other end of the line said to sit down: no, don’t get up to look for the ambulance, or to get your coat, or even to pee.

My heart is fine. It took six hours from feeling that first twinge, to finally leaving hospital: three ECGs, and one x-ray later. I don’t begrudge the time: if that’s what it took to put my mind at rest, fair enough. So, a great big THANK YOU! to the NHS, for stepping up to the plate. And an equally big BOOO! to the saddo who wasted no time in taking Obamacare away from his less fortunate fellow Americans.

I’ve now used the NHS for three different things – cancer, mental health, and a suspected heart attack – in one year. I’m hoping that – aided by regular Mindfulness practice – I don’t need its help for more than a year. Make that a decade. Scratch that, make it a lifetime.

I’m also grateful that I turned veggie before I thought to try a kebab. After all, three out of three paramedics say reading is much better for you.

Or is it the empty boxes that are the real problem?

(1) Once heard, a phrase that is never forgotten.

As a Muse, Depression Sucks

Posted on February 5, 2017 by Janet Coburn | Leave a comment

Recently, someone commented that I didn’t write like I was depressed, even though I actually was at the time I wrote.

This week I am even more depressed, so I thought I’d give you a look inside my head as I try to write while depressed and/or anxious.

::typing:: “Donald Trump Is Not a Monster. He may be a liar, a bully, and a misogynist who is uninformed, egotistical, and thin-skinned, but he is not a monster. Monsters are mythical. They are what we invented to be The Other. To say a person – Timothy McVeigh, Ted Bundy, Donald Trump – is a monster is to say that they are Other: not human beings. In reality, they are all human beings, who may have done monstrous things. But they are motivated by the same things as all humans: greed, fear, hate, sex, fame…”

::thinking:: No. That stinks. Half the people who read my Et Cetera, etc. blog will hate me because I said Donald Trump is not a monster and the other half will hate me because I compared him to Timothy McVeigh and Ted Bundy. I’ll offend everyone at once. Maybe I could write “How to Offend Everyone at Once.” No, that’s a terrible idea. My goal is not to offend.

::still thinking:: Why am I so afraid of offending anyone? Is it because when I’m depressed, my self-esteem is super-low and I can’t afford to lose any more friends? Is it because I’m female and was raised to be a people-pleaser? Then why haven’t I pleased more people? Is it because I don’t want to be called a “special snowflake”?

::still thinking:: Maybe I should write something about education. What, though? The education issue everyone is talking about is Betsy DeVos. I only know about her what others have written. Writing about her would be useless and boring. Crap. It’s already Friday and I don’t have anything. I’m not going to have a thing to post this week.

::typing:: “The Handmaid’s Tale: A Tale for Our Times”

::thinking:: No. Hardly anyone reads my book posts anyway. How can I have been doing this for three years and not have more followers? Is that why I write? Ego gratification. I’m a sad, sad person who needs external validation instead of interior satisfaction.

::still thinking:: My husband doesn’t even read my posts half the time, even if I mention him. Maybe I could write about bipolar disorder and sex. No, I’d have to do too much research and I’m running out of time. Besides, with my luck, my husband would read that one and not want our sex life all over the Internet.

::still thinking:: My knee still hurts. How long have I been sitting at this stupid computer?

::thinking:: No. I don’t hear voices like psychotics hear voices. All I hear are Pete Seeger singing pizza commercials or a men’s chorus or an NPR broadcast that I can’t quite make out. That’s boring. My life is boring. Besides, I’d have to do too much research and I’m running out of time.

::still thinking:: Maybe I could re-post one of my old posts. Wouldn’t that be cheating? If I can’t some up with something by tomorrow, I may have to. But that’s like admitting failure. Like I can’t write. Maybe I can’t write anymore. Maybe I’ve already written everything I know.

::typing:: Recently, someone commented that I didn’t write like I was depressed, even though I actually was at the time I wrote…

::thinking:: Now how am I going to illustrate this?

Well these sound easy enough, and yes, I know about breathing exercises to calm anxiety and panic. I’ll try these and hope they work, because when anxiety hits me, there seems to be no stopping it.

Whether you have occasional worries or full-blown anxiety attacks, deep-breathing is a must for maintaining optimal physical health and emotional well-being.

Deep-breathing is so vital because, in addition to helping you stay calm and avoid knee-jerk reactions, breathing is your best defense against panic attacks. If you’ve ever suffered one, you know how scary the experience can be. Maybe you thought you were having a heart attack, or worse—you may have felt like you were knocking on death’s door.

According to a study published by the Journal of Emergency Medicine, 30 percent of patients who seek treatment at emergency rooms with complaints of chest pain (and no evidence of coronary artery disease) suffer from panic disorder. When we’re stressed out, we tend to over-breathe (rapid, shallow breaths that resemble panting), a culprit in panic reactions, or under-breathe (hold our breath) which can cause dizziness or hyperventilation.

Studies show that deep breathing increases brain functioning, soothes the nervous system, cleanses the lungs, and promotes quality sleep. It’s a win-win, and these three techniques can help you get on the right side of calm.

Sit with your eyes closed and turn your attention to your breathing. Breathe naturally, preferably through the nostrils, without attempting to control your breath. Be aware of the sensation of the breath as it enters and leaves the nostrils.

Step two: Concentrate on your breath and forget everything else. Your mind may be busy, and you may feel that this exercise is making your mind busier, but the reality is you’re becoming more aware of your mind’s busy state.

Step three: Resist the temptation to follow the different thoughts as they arise, and focus on the sensation of the breath. If you discover that your mind has wandered and is following your thoughts, immediately return it to the breath.

Repeat as many times as necessary until your mind settles on the breath.

Start by breathing in and out slowly to become aware of your natural breathing rhythm. Let the breath flow in and out effortlessly, as you prepare your lungs for deeper breaths.

Step one: Inhale for a count of four.

Step two: Hold for a count of seven. (If you feel dizzy, hold for four until you can build up to seven.)

Step three: Exhale for a count of eight.

Step three: Pause for a count of one.

Step four: Now close your left nostril with your ring finger and release your thumb off your right nostril.

Step seven: Pause for a count of one.

Step nine: Breathe out through your left nostril.

Start slowly with one or two sets and gradually increase the number. Sit quietly for a few moments after you have finished. 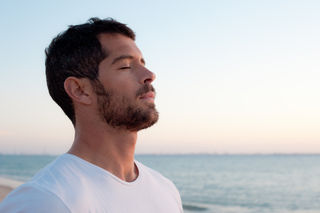 Besides developing a wonderful, calming habit, intentional focus on deep-breathing can mean starting your day in a mindful state. Remember, anxiety loathes action, so stay three steps ahead by inhaling the good, and exhaling the bad.

Positive rather than negative

Haven’t written anything in a very long time. Have not felt like it. Life’s been full of many anxiety provoking events. Doesn’t seem to be letting up ,by any means. Trying to decide to just go on despite events. Trying to just go on despite what’s been happening. I tell people to look at the positives in their lives and then be happy for them rather than be scared, anxious and depressed by the negative ones. Trying to take my own advice. Easier said than done, absolutely. But I’m going to try and also will try to come back to my bipolar1blog, my beloved blog that I really used to love to write. Can’t wait for things to be perfect, or even better, must start living again. There are few very bad things, my loved ones’ health conditions, as well as other things, however even in the midst of the bad, there are still many things for which to be thankful. So god help me, I plan for b being thankful.