To my European readers, and to those who have been to Europe – have you ever used the toilet while simultaneously showering?  Because I haven’t done this, but I’m wondering if it’s a thing.

I was at a very nice hotel last weekend for a work conference. The hotel is described on its website as having “a very European feel.”  The reviews on the hotel confirmed this, with multiple people claiming that, “Yes, it feels very European.”  I’m wondering if these people haven’t actually been to Europe, or if my travels to European countries have simply not prepared me for what “Europe” is actually like.

Side note: Last time I was in Europe was in Germany, and I got bags of Haribo gummy bears on my pillow every day.  This was awesome.  I hoped for gummy bears at this very European hotel, but no dice.  What I got instead of gummy bears was a piece of plywood and a freaky shower.

Our room seemed pretty standard until my friend went into the bathroom and said, “Whoa. What the…?!  What is that?” Obviously that means, “Something awesome and potentially blogworthy is lurking in the bathroom.”

I walked into the smallest hotel bathroom I’ve ever seen.  My friend and I couldn’t both stand in there without being vaguely snuggly, but we crunched in to look at the “shower.”  A shower head snaked out of the ceiling, but there were no walls.  There was an optional curtain that, when closed, took up most of the bathroom. I texted my husband and said, “Ummm…I’m going to have to shower in this.” 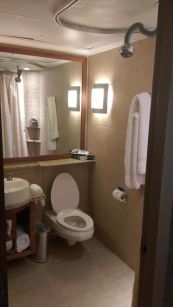 He texted back, “I’m confused…you’re going to shower in the toilet??”

I said no and told him to look at the top of the picture.  Then he said that technically, I could shower while on the toilet if I wanted to because they’re practically on top of each other.  Also, the shower head can spray in whatever direction I’d like.

He’s right.  It made me wonder if time-strapped business people have ever done both at once in a gross multi-tasking initiative.  “Raise productivity, team!  Don’t take time to use the bathroom and a separate time to shower!  That’s archaic!”  Now if only phones were waterproof so they could check e-mails while also showering and pooping…ultimate productivity.

As if the shower wasn’t weird enough, a piece of wood was sticking out by the side of the sink.  I pulled it out and asked my friend if she knew what it was for.  She didn’t know.  We conjectured that possibly it was a handicap seat for the shower, but we couldn’t find anywhere to affix it.

So then I was standing there holding a wooden board in the bathroom/shower, and I couldn’t help but wonder what about this is “very European”?

Eventually we found a little white card (laminated so that it won’t get wet).  It said that the “wooden mat” is provided so that we can put it down by the sink after a shower and stand on it.  That way our feet won’t get wet on the tile.

I would have loved to be at the board meeting where someone said, “Yes, the soaking of the entire bathroom is an issue… I know!  We’ll give the guests wooden planks to stand on!  Problem solved.” I have to imagine that was at the end of the meeting, and everyone approved the idea just so they could go home at the end of a long day (and then shower in their normal showers).

This is the nicest hotel in town, and I had to put down a piece of wood by the sink in order to dry my hair? That doesn’t feel European to me. That feels…I have no idea what continent that feels like.  Possibly Antarctica, because I’ve never been there and I feel like their floors are probably really cold.  “Hey Joe, did you bring that mat with us?  I want to put it on the floor in here so my toes don’t freeze to the tile.”  Yes, that’s logical.

I’m going to leave a review on the hotel’s website that says, “My stay was very nice, but I found the decor and amenities to be more Antarctic than European.”

The National Institute of Health and Merriam Webster define schizophrenia as a chronic and severe mental disorder that affects how a person thinks, feels, and behaves. People with schizophrenia may seem like they have lost touch with reality. However, there is so much more to it that any many different sub-types of the mental disorder.  Ref1 Ref2

SCHIZOPHRENIA  is common for hallucinations (visual and auditory) and delusions to be present. One of the most common schizophrenia symptoms is hearing voices. This is very conflicting, since the voices are absolutely real to them, yet their loved ones and friends cannot hear them. This results in an anxious, conflicting situation that is often very frightening. People with schizophrenia often exhibit violent behavior, which can be a reaction to the fear, or an action triggered by following what the voices say. Ref3

When you ask everyday people what they believe the symptoms to be, they are most likely to describe those for paranoid schizophrenia.  Ref3

There are many types of schizophrenia and many of them overlap and a few are called the same thing so it was difficult to write this and differentiate between the exact types . Many of them have the same symptoms and therefore I have shortened some as to not be repetitive.

Originally posted on Still I Can't Be Silent:
Just a few of my Moebius Syndrome Awareness Day photos. Not really in the mood to write anything as honestly as I don’t have any novel thoughts on the day or…