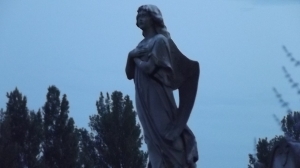 Samhain is the Pagan name for Hallow’een. Like most holidays, it’s a bit of a mix: feasting, remembrance of the dead, and the turning of the year. I love a good midnight feast, as well as having two New Years. As for loss, well, it’s been a rough Celtic year, featuring the death of two friends, as well as other losses.

So much for grief, but where does Mindfulness fit in? It comes down, at least in part, to my often shaky mental health. I had what I now call an “emotional Adriana” last weekend. The phrase comes from a scene in the Sopranos, in which one of the characters becomes so distressed that, well … whatever you do, don’t watch this whilst eating, or if you have a weak stomach.

Things can build up, and overwhelm me, resulting in a loss of confidence, motivation, and faith. Faith in myself, belief in possibilities, and, inevitably, loss. Overwhelmed with distress, everything I love can feel both pointless, and threatened. Last weekend, this resulted in a mercifully brief – though it didn’t feel like it at the time – “emotional Adriana”. 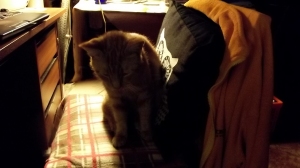 “Stay with me”: lovely Al

You name it, I was crying about it: work, guilt, the fear of being ill over Samhain, even this chap (see photo, right), who is in fine, rat catching fettle. At times like this, assuming I’m not hiding in bed, or sobbing on the sofa, I flee to Youtube, and weep over clips like this, or this, or, of course, this.

Inevitably, those choices reflect the fact that I’m getting older, and my awareness of mortality – even worse, that of those I love – is increasing with the passing years. 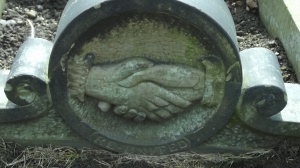 “Hello from the other side”

Is it strange to seek out a cemetery where no one you know is buried, at times like this? If I wanted to, I could go into the myth about real life witches visiting cemeteries for goulish reasons. Suffice it to say it is a myth, and one full of bullshit.

My visits to Hyde Park Cemetery do have a connection to my own, rather ecclectic Paganism. That connection is nature.

Recently, I’ve been spending even more time than usual indoors, and away from the fresh air, bird song, and greenery which my body and soul crave. The local cemetery is only a short walk away, and is a quiet space in which to collect my thoughts, take photos, and appreciate the life which is all around me in this land dedicated to the dead.

There, I can practice Mindfulness at its most basic: being in the present moment. Observing the trees, and the headstones, and listening to the birds.

The cemetery has also been a source of inspiration for my writing. The first, unpublished novel I ever wrote provided me with a name for one of my characters. More recently, it’s the setting for one of my favourite stories in “Koi Carpe Diem“, titled “The Unseemly Disappearance of Bunty Jennings, Tree Whisperer”. It was a pleasure bringing Bunty back in “The Peculiar Profession of Bill Morris: Tree Whisperer”, one of the stories in my upcoming collection, “A Yorkshireman in Ohio”.

As you can tell from the titles above, Bunty has moved on since his first story. Some things, however, haven’t changed. His best friend is still a tree:

I wish you and yours a happy Halloween, and a blessed Samhain.