I have been finding all sorts of topics for blog posts these last few days – a lot of them having to do with how I am dealing with my chronic illnesses. The irony comes in because I am too … Continue reading →

how did you know

that you were meant

to be a healer?

because i’m broken too

so i am falling

in love with myself

to get a taste

of my own medicine 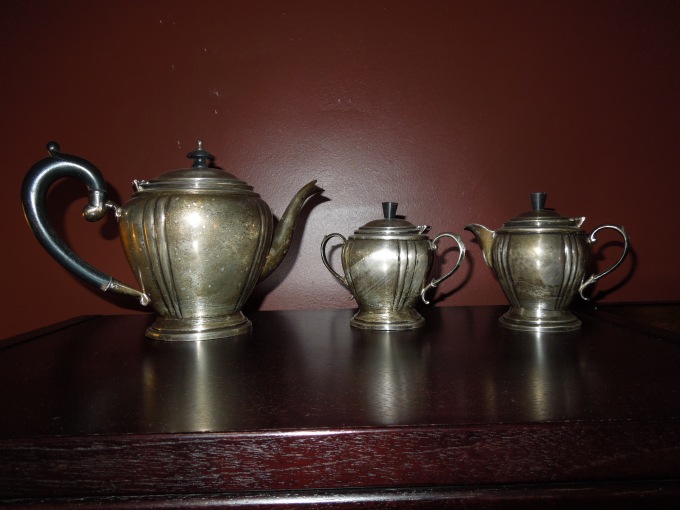 This is my grandmother’s solid silver tea set that was passes on to my mother and then to me! When it’s polished, it looks absolutely beautiful, but I like it like this too. My grandmother got married in 1926, and must have gotten this as one of the pieces in her dowry.

This is a newspaper that came out of the walls of our 110 year old condominium in Louisville, we were doing a major renovation. It’s from 1937! Quite a surprising find!

I fear May has broken my spirit and possibly my brain. Fortunately, I see my brand-new psychiatrist on Saturday and my therapist on Monday.

I actually thought about writing my blog without using the alarm! Hopefully this will become a good habit again.

How am I feeling today? I honestly don’t know. I am motivated enough to shower and wash the dog. (two for one deal) I was able to eat a little already which is good. Lately I have just such a hard time eating. I know it is all in my brain though. I just have to be tougher than it for a change. Eating when you don’t want to is just very difficult. I’m not exactly nauseated. It’s really hard to describe.

My mood is good. My anxiety is middle of the road. I try not to think about it too much. Thinking about my anxiety makes me more anxious. Stupid huh?

So far today has been kind to me with the hot flashes. I am hoping my body is getting used to the Latuda.

Still missing my weed though. I didn’t realize just how much it helped with things like anxiety and eating.  Tonight I should be able to get some more though.  I wish I lived in Colorado.

The biggest topic of discussion on the ward among patients was always some aspect of the illness.  One girl I’ll call Shaquita asked everyone about side effects of Effexor, the newest medication she was taking.  Almost everyone there was new to psychiatry except for one girl I’ll call Tricia and on older lady in her sixties I’ll call Myra.  Tricia had been in Whitfield—the state hospital for the mentally ill–at least once that I heard her brag about.  She was at St Dominic’s this time for issues related to her father’s recent death, and she was drawing Social Security Disability for depression.  Myra was in her early sixties having been treated for bipolar disorder for most of her life.  She was loud, laughing, and talking constantly about sex and her five ex-husbands.  I prayed that wasn’t seeing my future in her as I listened at a distance.

Craft therapy was intended for us to find new ways to spend our time.  We could paint, do bead jewelry, draw, or color t-shirts.  The crafts lady remembered me from previous visits, even remembered my name, almost.

This visit, as usual, I made bead bracelets from elastic string and small plastic beads.  Sorting through the beads to find the right colors took up all my concentration, allowing me to finally relax from the anxiety about my children, my husband, and what I was doing with my life.  I made a pink bead bracelet, alternating a series of round beads with square ones.  I made one for my oldest daughter, Terrie, because she had come home from college on her day off to take care of tasks around the house and catch Rachel coming off the bus after school so Bob wouldn’t have to take off.   I started another one but didn’t have time to finish it.

We also had the privilege of visitation on Saturday afternoons.  Bob came to see me this time right on time, wearing blue jeans and a nice shirt. We talked about the kids, keeping the visit light and cheerful for both our sakes.  I made sure I sent my purse and its contents home with him instead of keeping it in the safe at the hospital.

Bob and I were also able to talk to each other every night on the phone for outgoing calls on the ward.  Calls were limited to ten minutes, so we couldn’t talk long.  But I looked forward to those calls as a lifeline back to my family and to my normal life. I would call him around 6 p.m. and we would talk about the kids, and I would brief him on my progress and how soon I might get to come home.

Mealtime and snack time are a big part of the day, too—smoke breaks used to be until so many hospitals went smoke-free.  We used to go to the ward cafeteria for meals; now meals as well as snacks such as ice cream, cake, or pudding were brought to us on the ward.  Jackie, who ate more than everyone else because he was six-six, would hide snacks in the pocket of his jean jacket to eat later in his room.  Shaquita hoarded sugar packets like they were cocaine.   Smokers who used to have the option of smoke breaks at St. Dominic’s now get nicotine patches once admitted to the ward—which didn’t stop Johnny from chewing smuggled nicotine gum as well.

My Mind is Okay, and my Body is Fine

And by ‘fine’, I mean the ‘original meaning’ of Fucked up, Insecure, Neurotic, Emotional... well okay, the fucked up part, at least. I’ve had headaches that taking paracetamol (Tylenol) made worse in spite of the fact I strictly limit myself taking it for when I really need it. That went on for a couple of days to the point where I didn’t take anything after a day or two of trying to treat it. And then I got some pinchy back spasmy things, though thankfully, paractamol + Nurofen Plus did the do (Nurofen Plus = ibuprofen and codeine). Yeah, got to love the need to throw everything at anything. ¬¬

Having said that, I was bemused to catch myself suddenly able to manage a few household chores. I’d commented to my husband that it probably had something to do with pushing back not only the bigger pain, but the constant level of physical pain that chronic fatigue and mental illness bring. It wasn’t much — just sorting through laundry and doing some dishes, but it’s a lot for *me*. If I’m honest, if I make it through a day mainly cheerful while remembering to eat, that’s pretty good as far as I’m concerned.

Really though, the brain has been holding on pretty darn well. I sort of figured the extended release Seroquel worked better for me than the normal release, but I hadn’t really appreciated just how much better until those couple of shitty months. My antidepressant is at its max dose, but that’s fine for now. My only niggling complaint right now is that my getting to sleep is still a bit rocky if I go for more than a day without taking some melatonin, but that’ll even out in time. I think.

At this point, my biggest big-big complaint is wondering where in the aether my ADHD referral is. One of my friends works at my GP now, and she confirmed that she hadn’t seen anything about the referral there recently. It’s been a couple of months now since I was sitting in Dr. K’s office watching her phone the surgery up to push it along, so maybe it’s gotten somewhere. Maybe it hasn’t. I continue to hope that the system will eventually vindicate me, but for now, it’s frustrating and occasionally hilarious. Yes, hilarious — I hear some pretty weird crap from my brain static shorting out, and now that the husband and I have a firmer mutual understanding of this, I can share what my brain was telling me I heard over what was actually said, and sometimes it’s pretty random. Still, it would be nice to have it yanno, working and focused (so that I don’t forget about things like this post over the course of a day or two, doot doot doot).

Anyways, tl;dr, I’m alive, mainly doing well, just sort of low spoon when it comes to writing. So it goes sometimes. Hope y’all are well out there.

It seems like every blogger eventually does a pet peeves post and this time it’s my turn. Originally I had planned to do pet peeves only regarding mental health, but I couldn’t really think of many other than the ones we hear over and over again and there just weren’t that many. So, here’s my […]

The post Pet Peeves appeared first on Insights From A Bipolar Bear.

Abuse- it stays with you

Posted on May 31, 2016 by Yve's Corner | Leave a comment
Trigger warning: sexual content In my previous blog post I mentioned that I was a speaker at one of the South African Depression and Anxiety Group’s talks about Bipolar Awareness. I also mentioned that I was molested at a young age.  I didn’t want to labour on the point, but I do believe it deserved […]