Back to the Garden: My Inner-Hippy, & Me

The twilight after a sunny afternoon: Doncaster, May 2016

One of the joys of having a cat about the house & garden again is that they are very good at bringing me down to earth. This cat is a hunter, though until recently we thought he only played with his food. A few days ago – crucially, just before I was due to go out – he made an odd sound which made me think, “Ah, an invader kitty is giving him a hard time.” Being reasonably tender hearted, I opened the back door, only to realise that the reason he was making a weird noise was because he had a rat in his gob.

Oops, indeed. We only found out what had happened to the rat the next morning, when my husband pointed out a slug-sized, black bit of gut, just behind my desk chair.

“What’s that next to it?” I asked my husband. 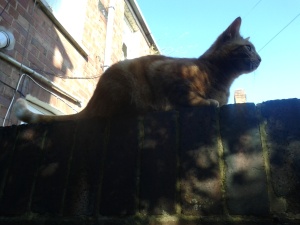 The captain of his soul. Also, feet.

Our garden is more wild than wildlife garden. Whilst we do get a lot of wildlife in the form of medium to small birds, as well as bees, and insects, it doesn’t have the lovely, cottage garden look that “wildlife garden” conjures up. It also lacks a pond, though that’s mainly because I’m lazy, & have little in the way of engineering skills.

Very few creatures other than me, the cat, the previously mentioned “invader kitties”, and the birds & the bees ever visit, so from late spring til late autumn, it can serve as a sort of extra room. One overlooked by the back windows of our near neighbours, who I hope have better things to do than look at a middle aged woman doing a spot of early morning garden in her dressing gown, and favourite bunny pjs.

With only today to go til I’m off for a week, I’m looking forward to letting my inner hippie have a bit of a run, which means spending time in the garden, and tidying up an area where I like to burn candles, and joss sticks.

I’m also having surgery for early breast cancer, including removal of a lymph gland. I’m looking forward to the post surgery. Not the potential hurling, and/or flaking out: no, the part where they say “You can go home now, Mrs North,” and they don’t see me for dust.

My hatred for hospitals was honed to new spade sharpness thanks to my first few admissions to the local psychiatric ward. Which, unfortunately, was located in the same part of the hospital where the breast cancer care unit is now. One stairwell seems unchanged from when it was a psyche ward. Whilst the pictures are gone, and the smells aren’t the same, that aura of misery, and feeling of being trapped, still remains.

Post surgery, I’ve been warned not to do any heavy lifting for a month or so. Which is why I have an imminent date with some tomato plants, and my 2nd attempt at a wildflower patch. It won’t look like this:

For starters, our garden hasn’t Chatsworth style garden statues, not to mention the space, and staff. I am quite fond of Spook, who was a gift from friends.

The old wok in the picture to the left was our bird bath for many years, but was retired when I bought a genuine bird bath from the RSPB. The new bath is waiting for me to clean it, and set it up properly again.

The part of me I refer to as my inner – sometimes, wannabe – hippy loves my time in our garden, small, scruffy, and unplanned though it may be. It’s full of herbs, and periwinkles, and – when I put the food out, and the weather’s right – blackbirds, sparrows, starlings, collared doves, blue tits, and great tits.

We even have a pair of robins who visit regularly. The male is getting quite bold, too.

The garden has almost always been good for my mental health: if I’m hypomanic, it’s a safe place to burn off some energy, without fear of pissing people off. If I’m low, it can lift my spirits, whether by doing some actual gardening, writing outside, or simply being a someplace for a quiet cuppa.

Whether your hippy is an inner or outer one; whether you have a garden of your own, or a nearby park or wood you like to visit, I wish you joy this springtime morning.