The Host: a Poetic Blog

Waiting for bad news on a cold, windy day at the arse end of November. At my age, bad news is no longer really news.

Yet it still hurts.

I wasted a lot of valuable time in my youth watching game shows. These days I don’t see many except for “Have I Got News for You”, and its lesser cousin, “Mock the Week”. I also enjoy “QI”.

One of the best things I did with my teens was to take Ms McGlade’s poetry class. She introduced us to Edgar Lee Masters’ “Spoon River Anthology”, and I’ve been grateful to her ever since. 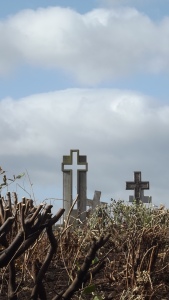 “All, all are sleeping under the hill” – Edgar Lee Masters

Over the years I’ve made several attempts at writing Spoon River style poems, the first for Ms McGlade’s class, back in the 70s. Here’s one from 2012.

All things considered,
I should be in a mausoleum.
Something with a door,
at any rate.
After all, so much of my life
revolved around them.

No, that wasn’t meant
as a joke, though I tried my best
to keep things light-hearted.

Some thought me a snob.
Others, merely shy.
Because I never stopped behind
for those after-show parties.

In fact, I was never sure
how the people who chose
the one with the donkey,
or the sack full of spuds
rather than the smiling young thing
holding the poster
with the words ‘P & O’
and “Mediterranean”
would react.

Door Number 3: I’m sorry,
but that information
is temporarily
classified.

(1) The Royal Society for the Prevention of Cruelty to Books.