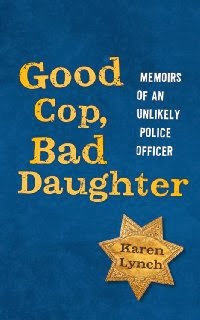 One of my favorite genres to read is memoirs, but it is not often that I find one that moves me to the extent that Karen Lynch’s Good Cop, Bad Daughter did.  Her thorough account of a difficult childhood and how it prepared her for a career in the police field is written with passion and eloquence, with just the right amount of humor woven in.
Karen learned at a very young age that survival would require her to be self-reliant and courageous.  Her mother, Ann, suffered from a severe case of bipolar disorder, and while medication subdued many of her symptoms, she often stopped taking it and drank heavily instead.  Her extreme manias were characterized by paranoia and irrational thoughts. This caused some very rocky relationships with the men in her life as well as a negative view of police and other authority figures.  As a mother, Ann was often neglectful, and sometimes even violent toward Karen.  Karen was often left alone during her mother’s erratic travels and frequent hospitalizations. If it had not been for Jim, one of Ann’s discarded boyfriends, Karen would have been homeless and may not have survived.
Pursuing what had been her mother’s dream of becoming a nurse, Karen did not feel like it was her true calling.  Still, she knew she had to make something of herself and nursing seemed like a noble career.  Then, one day, she saw a vision of herself being a police officer, and suddenly something just clicked.  Karen knew her destiny.  She just didn’t know how hard it would be to attain it.
In the late seventies, San Francisco had just recently opened up to the idea of female police officers on street patrol.  Many of the older trainers that Karen performed for in the academy were still skeptical, and sometimes downright cruel, about the prospect of a woman making it in such a male-dominated role.  With persistence and dedication, Karen graduated as the only woman in her class and joined the San Francisco Police Department in 1981.
I really enjoyed this book, though I had my guard up when I first began reading it.  I was afraid it was going to be yet another book portraying the evil side of a “crazy” person, and at first glance perhaps it is.  After all, there is nothing cute and fluffy about bipolar disorder.  Even in the best of circumstances it can wreak havoc on a family, as I can firmly attest to from my own experience with the illness.  It is always surreal reading about bipolar disorder from a perspective outside of the person who has the illness. We are so often painted as “the bad guys” in media, and sadly it is sometimes true.  Yet, as painful as it was to read what all Karen went through with her mother, I finished the book feeling justified in my own attempts to so desperately cling to any shred of normalcy in my life that I can.  I know I try so hard because I don’t want to be that kind of mother who neglects or harms her children.  While I know I fail to be the most stable parent, my heart is in the right place to seek out what my children need and be there for them the best way I can.  Mental illness can rob us of sentiment and rationale. I am no exception.  And yet, I have learned from my highs and lows, and while I can’t completely control what happens, I have learned enough to keep myself in check, to recognize triggers and symptoms, and to trust my loved ones when they say I am getting out of hand.  Ann never learned these things, or else she ignored them.  I think a lot of that can be contributed to her drinking habits; then again, I know what it’s like to try to self-medicate the illness away.  I also know it just doesn’t work that way.
I would recommend Good Cop, Bad Daughter to anyone who loves a good memoir.  It really opened my eyes to the extent of training that our police officers go through in order to be deemed good candidates for keeping our streets safe.  It also made me realize that out of seemingly hopeless circumstances, greatness can be achieved.  As Karen so eloquently wrote on her closing page, “Hoping for a different life is a pointless exercise.  Ultimately we must all make the best of the lives we are given.” (p.276)