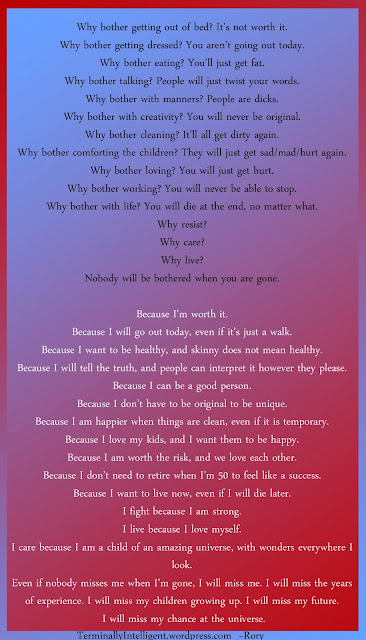 Posted on January 15, 2014 by Lipstick and Lithium | Leave a comment

Is a $5 Beauty Blender dupe a “Sponge-Worthy” replacement for the $20 original?…

It’s Been A Long Time

Yawn in the beginning. Music actually starts at 2:27. Put on your seat belt and prepare for some corny old times. Yawn some more.

The Big Come Down

Being Nine Inch Nails, this is miles more nihilistic than I am actually feeling. But I like the song and the album and it’s vaguely relevant to the moment, so — enjoy or not as you see fit.

But yes, I’m off the Seroquel as of the 10th. I’ve been slow in reporting back because I have been flat-out sick since then. My birthday on the 11th was mainly wonderful, but I started feeling a bit ill at dinner, and of course, did not manage much in the way of sleep that night. I knew that was going to happen, ’cause that’s what happens when you forget a dose of Seroquel. I was mainly prepared for that — I wasn’t prepared to realize I’d been rocking a head cold for days and it was getting worse, or that I had to deal with a surprise stomach bug. Or was it a side-effect of coming off the Seroquel? The end result is the same — my guts were angry at me, and sleeping wasn’t an easy prospect.

But. But but but. It’s fair to say my mood is holding up, and that can be summed up in one filthy hateful word — bedrest. I put MYSELF on bedrest this week because I’ve been so dizzy and poorly that being on my back sounded better than being upright. It also didn’t help that I couldn’t stomach the thought of caffeine for a few days, which as yesterday finally being greeted with a Dr. Pepper shows — it helps a LOT with dizziness and headaches in me. Broken body = need sugary sugar sugar to keep fuelled, even if they’re ‘bad’ and ‘fattening’ or whatever. I expect that once I get the hysterectomy, this is going to become a non-issue and that (if my taste buds in general tell me true) I can expect to hit a point where my main form of sugary caffeine will not appeal anymore. I look forward to that day when it comes on its own steam; I don’t appreciate my body trying to backstab itself when already poorly like it’s done this week.

Anyways, I have an appointment at the hospital not with the psych team, but with the pregnancy folk to convince them that I’m ‘coping’. I think I dislike that word, though I more dislike SURPRISE APPOINTMENT! that I feel is superfluous. Were I not coping mentally, I’d talk to my psych team. :p Unless they want to give me something to help with sleep, then I might forgive ‘em for this… whatever it is. I don’t really know, other than it triggered up as a ‘normal’ appointment for me because I admitted to having a mental health issue. I’m sure that I’ll have something to say about it in the next day or two, and hopefully I will be pleasantly surprised.

For now, caffeine and paracetamol. I hope everyone is well.

The post The Big Come Down appeared first on The Scarlet B.

Yesterday was one of the worst mental health days I have ever had. Nothing bad happened. There was no trigger. There was no responding to outside events that affected my mood. I woke up with the distinct notion that I should kill myself. Everything was dark and distant and cold. I could find not one single positive thing about myself. I could see no future. I woke up half comatose. I got my kid on the bus, came back, and fell asleep. I NEVER sleep during the day. It didn’t get better after I woke, either. My mind was just convinced of the absolute futility of life. “I should die, I am useless.” “I have done nothing but mess up my life, I should kill myself.” Round and round it went. All. Day. Long. Hell is spending hour after hour in that mental space. I just felt like absolute shit. Physically, mentally. Like my brain was wrapped in gauze. Nothing I did made a difference. Getting up, moving around, listening to or watching things I enjoy. NOTHING HELPED. Bedtime was like the only mercy of the entire day.

Today was better. Not great, but better mentally. Had a massive panic attack when I looked outside and saw the internet company van parked out front. And my net was down. Just instant illogical panic. Shaking hands,racing heart, sweaty armpits, weak knees. Panic attacks suck. You know you won’t die from them but you sometimes wish you just would to never have to experience one again.

Read another blog this morning and this woman checked herself into a place to get help for her mental problems. Well her shrink told her she’s not depressed because she managed to go out and sign up for some sort of thing and she’s not bipolar because they’ve not witness a manic episode lasting 3-5 days. It was like a page from my own past. How hard I had to fight to get diagnosed properly. How long I spent getting the wrong meds because of a wrong diagnosis.This inexact science that is mental healthcare does us a disservice. They preach that we are all different, yet they have their neat little boxes of criterion that comprise a mental disorder. If you don’t meet every single check box, then you don’t have that disorder. It’s all bullshit. Most of it is opinion, anyway, and I’;ve had enough shrinks and diagnoses to know everyone’s is different and most are plain wrong.

But these are the people we have to rely on for help. People who tell us we don’t do this and we’re able to do this so we can’t be this. It makes me furious. I may get up, put my kid on a school bus, and keep dishes and laundry done but it’s automated functioning. I have no hope, no joy, no motivation. This is not living, this is existing. And that makes it depression. As for the bipolar…I rapid cycle, thus a cyclothymia tag. Just because my manic episodes don’t run for days on end doesn’t make bipolar any less the diagnosis. I am up and down and all around. I get hyper, I get illogically happy, I get low. I run the spectrum, without triggers.

And tomorrow I get to go see the shrink who will tell me to force myself to function blah blah blah., Push myself, yada yada yada. I am giving up on the Cymbalta. She mentioned something called Viibryd so I am gonna ask if we can try that. I can’t stand much longer in this depression. I was reading what I;ve been writing in my book…and even it is impacted by my mental states. I will turn a whole new direction and wreck continuity based on a mood swing, I ramble and make no sense. I have no joyous scenes because I feel no joy. It’s ass trash.

But today was better and I did do some stuff. Had to buy bread and of course saw two people I know which mortified me. I hate for people I know to see me in my depressive glory. Unbrushed hair, no make up, slobby clothes, and the look of a caffeine jittered haunted cornered animal. Awesome. Because they won’t think, wow, her depression must be bad, she looks bad. Nooo, it will all amount to how I am too lazy to groom myself, blah blah blah.

I just want to be me again. I haven;t been me in six months, since the last anti dep had to be stopped due to side effects. It sucks. It all sucks. I get to watch while around me people get on with their lives, things improve for them, and here I am, as always, treading water, going nowhere. Existing.On no planet will I ever accept existing as living life. I want to live life again. I wonder if I ever have, though. Lived life. Seems due to the mental illness much of it has been spent just surviving.