Posted on September 9, 2013 by Jenna Kahn | Leave a comment
I have an announcement…
Get the book here:
Marbles: Mania, Depression, Michelangelo, and Me: A Graphic Memoir

Responses will be accepted until October 13, 2013 at 11:59 PM
Video responses can be posted directly to the video above, and all other entries can emailed to
You can also email me questions or suggestions for next month’s book. 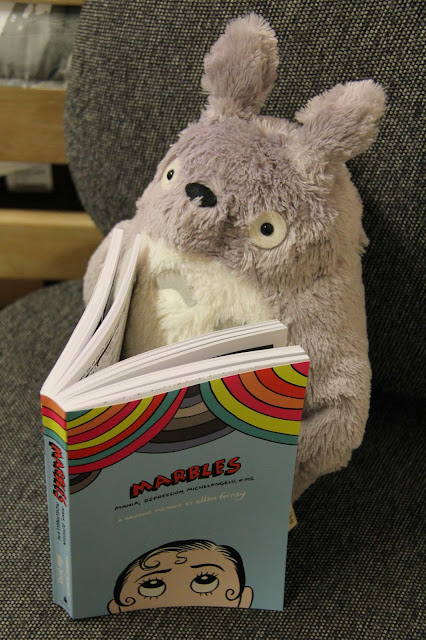 Deviation is beyond evil

I suppose it will seem asinine.

But to someone with my issues, it is a huge deal and it has me in a “deer in the headlights” state.

When I went to pick up my kid from school, the teacher actually refused to let her come to me like she has every other pick up for two weeks…The teacher walked her right over to me. Babbling about the color of the day for tomorrow.

At the time I thought it odd but just wanted out of all the traffic confusion and people chaos.

Now, as time has passed, scumbag brain has sent a multitude of panic attacks my way. WHAT DOES IT MEAN THAT SHE DEVIATED? hAS MY KId told some lie ab out how mean I am because I won’t let her juggle chainsaws?

What does it mean?

I am scared of my own kid because she lies.

Scared of the system because I have seen it not work as far as parents are concerned.

And I am scared of any deviation because the norm is boring but at least it doesn’t dropkick me into panic zone.

I’d rather have a gaping wound than  panic attacks. They can give you pain killers. There is nothing for the panic and all that comes with it.

Maybe it makes me a bad mom.

I had a new follower so as I always do I click on their picture and try to figure out if they have a blog to. Usually the person does not or it is private but I was pleasantly surprised by Randomness at its Best. It is written by Live Laugh Love, a mother and wife, who suffers from Bipolar disorder and she is just now starting new medicine after going a while with no meds at all. But I was hoping all you lovely Bloggers out there would stop by her blog and give it a read and show some support.

And oh yea, My man and I went to Mumford and Sons in Guthrie. Well, we tried to go but when walking to get to the entry gate I had a panic attack. So, my guy got the car and we went to our hotel where I felt very defeated. There went $200. I HATE PANIC ATTACKS SOOOO F”ING MUCH. There were over 30,000 at the concert so yeah I freaked the hell out. Oh boy.

It occurred to me today that people judge me,as is social custom, on first impressions. Which would explain why some people think I am a riot, some think I am a downer, and others think I am just a crazy bitch.

I am always in an altered state.

One would think the meds would fix this. They do not. If anything, the meds contribute to the cycles since some can spark mania or cause depression or cause withdrawal symptoms.

I don’t think anyone’s ever had the opportunity to judge me for who I actually am outside this fucking disorder. Furthermore, I don’t even think I know I am totally. It’s a constant state of flux and it is hellish.

Neighbor girls were here. I thought I’d clean the slate, could be me, yada yada. Nope. They pulled the exact same crap they always have. I never make an indent, they are brick walls of banes of my existence. The other kids…No problems, no bickering, no disobeying, no demands for food and drink. These two..never…fucking…stop. I sent them home at 5. Two hours is about my max on those two. And even that is pushing it because adults who put me under that much stress are automatically put on ignore. My kid has no clue how much I love her and want to do good for her.

And I am trying.

I just don’t think I am doing too well. I am actually scared that the illustrious “they” my paranoid little mind has concocted are going to decide I am cracking my lids and her father is going to swoop in and totally take her away while screwing me over. (In a way, I wish he cared that much, at least for her sake, though in my current state, he and his fragile psyche are gonna want to stay away,cos if I hurt his feelings when we were together, I would shred him now.)

And the depression, OMFG I cannot believe how quick it returned once the Cymbalta made its exit. I spent the entire summer manic, doing things that aren’t really me, and now I have to clean up the mess. Like letting those kids walk all over me. Like letting my babysitter mom turn my kid into a defiant junk food eating monster. I just sat back and let it all happen, against the fiber of my very being, and I felt nothing. I was manic. Nothing bad could really get in or if it did, it wasn’t making a dent.

It…gets…so…old having to own behavior that you committed in an altered state. People get “consideration” for drugged or drunken states when crimes are committed…But you get zero social consideration for being under the influence of mental illness or it’s so called treatments. And it’s not a desire for self absolution, I own what I do. It just gets old when you have to apologize time and again to the same people for being manic or depressed or whatever.

ESPECIALLY when these same people can be the biggest most hurtful assholes on the planet and they expect you to take a “They are who they are” attitude. Yet they can’t accept you have an illness.

SICK OF OVERGROWN KIDS WHO DON’T PLAY FAIR ON THE PLAYGROUND.

Cripes. R just called. Of course it wasn’t about how am I or my kid. No, it’s about his precious fucking shop. Can’t make it one weekend without disturbing me about that place. He wants to live and breathe it, fine. But I don’t. And I don’t think he’s fair about it or nice. He even swore at me because I haven’t figured out a LAN problem on this desktop someone brought in. “You’ve had it a month, can’t you get your friend to help you?” My techie friend won’t return my emails and I have TRIED but damn it, I am running into a brick wall. Sometimes they just have to be reformatted, especially after 300 plus viruses and malware have corrupted everything. Why he is so against a reformat it beyond me, there’s nothing on the hard drive other than program files and the owner has the disc. I think he’s being a dick about it. The guy could have had the computer back and running weeks ago were it not for R’s insistence to avoid a reformat. I think in light of the infections this thing had, a reformat would be the best option. Oh right, I am not there to think, just do as I am told while having a sunny disposition and no problems of my own to deal with.

****See bold print statement about people who don’t play fair on the playground.

The depression is making me hate every waking moment.

He is making me dread every single day, every fucking ring of the phone.

I really hope things change once withdrawal is done. The brain zaps are less and less so it has to be exiting.

That just leaves me with the problem of what to do about the depression, if I don’t head it off, it will kick my ass. And apparently, the dual mood stabilizer isn’t doing it this time. (No, why should anything ever work for more than a fucking month before quitting on me?)

I am so scared. I am so depressed.

And I am so alone.

My kingdom for ONE person in my life to give a damn and show an ounce of com passion.

Most people want to win the lottery or have a fancy car.

I just want a shoulder to cry on.

Until I just want an ear to listen to me vent.

Yeah, no wonder no one wants to be my friend.

And no one fucking asked me if this is the life I wanted, this is what I got handed.

But yeah, R, you keep making all your criticisms about how I am not upbeat and I am too negative. Keep judging me, you drunken denial laden idiot. I have judgments of my own. And not many filters right now.

Thinking about him and that shop is giving me stomach aches. And i have tried to tell him and he doesn’t care.

Okay, so there’s a part of me that never changes no matter the mood. I do love my animals.

Fuck. Just fuck. I am so confused.