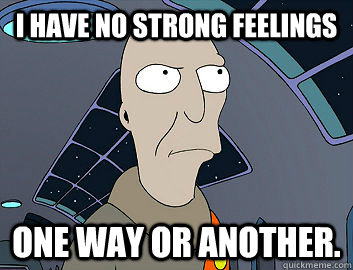 This about sums it up.

I continue to feel fairly neutral, and really? I cannot complain. Much like the Neutral President here, my gut says ‘maybe’. It’s a good thing, honest.

You see, my body continues to be physically exhausted. I am currently feeling by default nearly spoonless, which isn’t ideal. But it is because it means that while my brain is floating around feeling (what I’d deem as) okay, it means that it stops me from overdoing things. If I’m low/no-energy, then I’m not about to try to go biking around town. I’m not about to propose big out of the house events — I’m just making the best out of being a pile gelatinous goo here in my computer chair.

Having said that, it is totally making the best out of the not greatest. I’d like to go do things. I’d like for thinking about doing things to not be completely wearying. But I figure it’s better to be contented with my lot, yanno? That isn’t to say that I will be happy if this continues on, but that for the moment, I feel it’s better than not. I’m not trying too hard to be social, for example — I’m hanging back and enjoying solitude. I’m still doing pretty good though, insomuch that I’m actually *gasp* sort of active on Facebook, the opiate of the masses. That’s a pretty new development, definitely since I started the anti-depressant.

But in general — I have no strong feelings one way or another, and I’m okay with that. It all seems to be taking care of itself.

The post Blessed, Self-Perpetuating Neutrality appeared first on The Scarlet B.

I am feeling reminiscent and introspective this evening. Recalling the days of my youth when I was made to visit my father in the summer and every other weekend sends my thoughts toward despair. He was at times a decent man but I can’t remember him being that great of a father figure to me. Though he did love me…I know he did. But he was a sufferer of undiagnosed mental illness and an alcoholic. He was abusive so my mom divorced him but that didn’t free me from his love. Yes, his love and my love for him was like a heavy weight that pulled my spirit down.

Every time I visited him it was as if there was a muted depression filling the house or trailer he occupied. I had few toys there and most of the clothes he kept for me were too small. He would often sleep all day drunk in a recliner leaving my brother to be my occasional sitter but mostly my tormentor. My brother would make fun of me and shun me from his play. I once made a paper doll to play with because I had no toys and my dear misguided brother ripped it to shreds and called me stupid. That memory still hurts for some reason. It was like a childhood rock bottom. Father passed out, brother being hateful, and no mommy to rescue me because it was my dad’s weekend.

I spent my adolescence imagining what I would feel the day my dad passed away. It would give me cause to cry after school and at night. It gave me nightmares. It still haunts a small portion of my head but now it is the memory of seeing him on life support in the hospital when I was 18 and in my first semester of college. He died from alcoholism and it was a sudden unexpected death. His ventilator reeked of vomit and stomach acid and (this could be my imagination) alcohol.

I was relieved when he passed because I knew his suffering from depression and addiction was over. I also felt guilty for feeling that way.

Now I am almost 31 years old, 13 years after his death and I can still smell the ventilator and also see my paper doll torn to shreds at the hands of my brother.

I Am Dangerous: Crazy

I’m making my travel plans to return to Israel for two or three months.  And I’m taking my Psychiatric Service Dog, Noga, with me.

I could pay an extra sum for Noga to travel under my seat as a pet, as she only weighs just shy of 12 pounds.  That would save me a lot of grief and trouble.  However, having her in my lap pretty much guarantees that I will have a smooth trip unbothered by the extreme paranoia that tends to entrap me in places full of strangers.  And if I start to get tense, she will let me know by licking my face that it’s time to take a benzo before I get into Bad Trip Land.

One connecting U.S. airline wants a letter from my psychologist affirming that I am indeed crazy, and entitled to travel with my dog in my lap, for free.  Uh, that is, for no extra money.  I wrote them a strong letter alerting them to the fact that they are in gross violation of the Americans with Disabilities Act (which states that it is illegal to ask a person with a disability to disclose any personal information including the nature of the disability), and they replied saying that transportation is exempt from that Act.  I intend to take this up with the Department of Justice, which made up the ADA and intends it to be universally conformed to, at least in the USA.

Then there is the form for the overseas carrier that my psychologist must fill out, to certify that I am not dangerous.  Sigh.  What’s really sad about this whole thing is that since the last awful mass shootings, “mentally ill” has taken on the undertone of “dangerous.”

We had that back in the bad old days of insane asylums, where people were locked up “for their own protection” (thus the term “asylum”), because people acting “weird” have always been alarming to the plodding and fortunate sane.  Of course, our best and brightest scientists, artists, writers, musicians–all of them have been a bit wacky, if not flagrantly mad.  Just give it a think for a moment, and you’ll see.

And that’s not even including today’s astonishing bumper crop of flat-out crazy actors, actresses, radio “personalities” and other extroverts, whose job it is to get into all sorts of embarrassing public “situations” and make us all cringe when their publicists blame it on their “bipolar.”  Bipolar, FOOT!  Public misbehavior is what it is, whether they happen to be bipolar or no.

So between the heinous shooters and the famous mis-behavors,  we who are truly sufferers of mental illness (and I DO mean sufferers) are stuck having to prove that a) we really are mentally ill and b) that does not mean that we are (God forbid) the next mass murderer.

The media has done us yet another grave injustice, by speculating that the recent mass murderers must be mentally ill, and that if so, the mental illness is what drove them to do what they did.  The overwhelming evidence that the mentally ill are much more likely to be preyed upon than to be the predators is completely ignored.  I have not even seen it mentioned in the media.  The mentally ill, and that means me and maybe you, may as well be Mr. Hyde as far as the public is concerned (even though 25% of the public has at one time or another suffered from a mental illness).

Just for fun, I am going to apply to one of the TSA’s Trusted Traveller programs, so I can get through security faster and without having to take off half of my garments just to get through the line.  (BTW they don’t do any of that crap in Israel, meaning doffing of shoes and whatnot.  You still have to take your laptop out.)  How many of you think I will get certified as a Trusted Traveller, seeing as I am a self-disclosed Crazy who travels with a Psychiatric Service Dog?

So.  So far, I am being: forced to disclose my diagnosis;

Required to carry special documentation of my need for my Service Dog;

And as usual, will probably be pulled aside for additional screening at the airport.  I shudder to think what they will do with Noga while I am in the Take-It-All-Off Scanner with the x-ray eyes.  Isn’t that great?  You just walk in and they strip you, for free, and you don’t even gotta take your clothes off.

Of course, if I had a “visible disability” like blindness, or balance problems, or even a non-visible disability like diabetes or deafness, I would not be required to provide extra documentation, because those are “legitimate” disabilities.  Everyone knows that.  But mental illness, now…..anyone could feign that, right, just to get their dog on the plane for free?  Oh yes.  I’m crazy, and I need my dog so that I….what was that I needed the dog for?  Oh yes, so I won’t go wacko and shoot the plane up.  That’s why.

Do you see why I’m feeling discriminated against?