Riding on the Rims

A couple of weeks ago – ahead of an upcoming cycling holiday in the New Forest – I took my bike in for a service. various bits needed replacing, tweaking and basically fiddling with. When I went to pick up a couple of days later they told me that the rim of the back wheel was badly worn down (due to my having not replaced brake pads soon enough a couple of times) and I really should get this replaced before going on a cycling holiday in case the wheel succumbed. 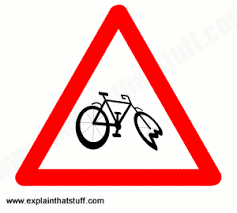 So that is what I did. I followed their advice, paid the piper, and rode off with renewed confidence.

Last week I did much the same for myself by going to my doctor so that she could see if I was road worthy. In bike mechanic terms she told me in no uncertain terms that I have been ‘riding on the rims’, my brake pads have worn too thin.  She cut my work hours by 50% for the next couple of weeks, upped my medication, strongly supported my plan to go on a cycling holiday, and told me to come and see her again in a week (that’s tomorrow).

Leaving the surgery I thought that it would be a good idea to go on a bike ride.  Over the next couple of days I thought about where I would go.  A bad sign. Normally, I just decide on the day and off I go. All my usual routes, distances and locations seemed too challenging.  Rides I have done – enjoyed - time after time; they all felt like riding in the Alps on a tricycle. So I decided to take it easy and ride a largely off -road flat route along a disused railway track.

The ride was pleasant enough, the sun was out, I had lunch at a nice pub garden, and hardly broke into  a sweat. I can hear you making encouraging noises: ‘take it easy’, ‘be kind to yourself’, ‘one step at a time’. The ride didn’t feel good at all precisely because of that kind of thinking. It just underlined for me just how below par I have become.

It is what it is says love
It is calamity

It is nothing but pain

It is what it is says love

It is what it is

Once, Twice, Three Times a Leaver

Yesterday was a very rare day indeed — I left the house. I did it of my own will for something besides work or a doctor’s appointment, and I did it three times. I’m sure to some this is a ‘So what?’, but to me, it’s a pretty big deal.

My participation in World Wide Knit in Public Day

As I mentioned yesterday, we went to the sporting good store, which was fine and dandy. And then we wandered down to the river to try and find the yarn-bombing group. That didn’t work out so well — we weren’t at the meeting place at the right time, so it took us ages to find them (halfway down the river). By the time we had, we agreed that we had walked plenty far, especially considering that Lilbit there is only just getting her feet under herself after twisting her ankle last weekend.

But as yesterday was World Wide Knit in Public Day, I was still fairly determined to get outside and knit (though technically there’s an entire week of days to participate, I considered yesterday the ‘real’ day). We live at the end of a row of shops, so once my husband and Lilbit had cleared out to go grocery shopping, I dragged a chair outside and made a pleasant public spectacle of myself. I figured I’d sit out there until either they got back from shopping, or someone asked me why I was sitting there knitting. As you might’ve guessed based on British stereotypes, I was out there until they got home from shopping, ha ha. Still, there were any number of happy-looking rubberneckers, at least one grinning fit to break her face old lady driving by, and any number of elderly men dropping ultra-solemn nods my way. So, I figure, it was time well spent. I made it outside of my gate. That’s pretty awesome.

My body disagrees with my today though on all the counts. See, yesterday was supposed to be nice and warm. Instead, it was overcast and windy; thank goodness I was only working on a gauge square the way the wind was trying to steal my wool! So there was an icy wind, and metal knitting needles. I’m not used to metal knitting needles, so these 6mm monstrosities are like strapping weights to my wrists. My arms hurt all the way up today, and I can only manage a row of knitting at a time. I think we’re popping over to my mother-in-law’s house soonish, so I’ll borrow some wooden needles off of her. As the project is for a small-person cardigan, removing weight in advance before I put more on the needles is probably a capital idea.

Our original plan was to go over there, and go for a bike ride. I’m thinking that’s not going to happen now. Did I overdo it yesterday? I’m not really sure. I’m still in a good mood mentally, even if my body is grumping all over the place. Part of me still very much wants to go for a ride, so I guess we will see if we can talk ourselves into it when we pop over to visit (our bikes are in my in-law’s garage, ’cause it’s a nicer safer place than our shitty shed at current!). I should definitely be mindful to not ride the good mood too hard — we all know what happens when the body runs out of spoons while the mind is cruising high. It’s the shortcut to a crash, and man… I don’t want that!

I hope everyone else out there is having a good weekend, and feeling some semblance of healthy.

The post Once, Twice, Three Times a Leaver appeared first on The Scarlet B.

Such A Blessed Weekend

When my hard drive on my laptop died the other night, I felt so cut off from everything and everyone.  I worked over the phone with the support techs, but once they realized it was a hard drive problem they were not able to help me.  I had no idea what I was going to […]