Yesterday I had my fourth interview for a Desktop Support job that I desperately do NOT want, yet I am giving it my best shot anyway because I desperately need a job.  What a fucking quandary!!  Today at 7am I had a Zoom (like Skype) interview for a Security job that I desperately WANT!!!  The interviewer told me that I did very well and that the next step would be a written test, which I would have 24 hours to complete.  Well, I have been watching my Gmail like a hawk and the damn test has not materialized!!  And I’m praying to GOD and BUDDHA and WHOEVER ELSE EXISTS OUT THERE that I can do well on this written test and get this job because GOD SAVE ME FROM HAVING TO GET A DESKTOP SUPPORT JOB!!!!!

And then this afternoon I have ANOTHER Zoom interview for another Desktop Support job, and then tomorrow morning I have yet another interview for yet ANOTHER Desktop Support job.  I JUST WANT A SECURITY JOB, PEOPLE!!!!!!  IS THAT TOO MUCH TO ASK?!  We will find out soon enough I guess.  I am going to be soooooooooooooo disappointed if I don’t get this Security job!!!!  I think I need to work on some emotional balance here.  Because I have none.

I know my blog has devolved to a blog about job searching and I’m sorry.  This is my life right now.  Hopefully soon I will have more interesting things to say, like I’m spending too much money or something.  Wouldn’t that be nice??

Hope you’re all having a good week so far….peach out!

Here are some things about her you might not know:

How old were you when you felt that you were different? It’s really hard to say when I knew I was “different” because I think I always was and always felt that way. But, then again, many people feel that way and it may not have been to do with mental illness. Looking back, though, I can see the signs of mental illness even when I was a child.

Describe stigma: Stigma is a hard thing to describe. I’ve experienced discrimination on a personal level and that’s where I have found the most misconceptions. People sometimes think being in a relationship with me is somehow dangerous. Of course, I have never hurt a fly. And as far as emotional concerns, of course, that is completely reasonable and I understand that my needs are not necessarily like everyone else’s. Nevertheless, I believe I am worthy of friendships and personal relationships. And the loved ones I do have would agree.

Since you were diagnosed, what percentage of the days have you felt yourself? This is hard to say. I think it’s hard to “feel like yourself” when you have a brain illness. It’s also really hard when you’ve been experiencing symptoms for years before diagnosis and treatment. I think what I strive for is peace, contentment and happiness. And as for how many days I’ve felt that and free of bipolar symptoms, it is very low.

Since you were diagnosed, what are your best accomplishments? I’ve done a lot since diagnosis including become a skydiving coach, paragliding with the Eagles in Venezuela, working for a major tech company and writing a well-received book on depression and bipolar. I’m not sure what is “best” per se, but I like to think many accomplishments have their virtues.

You are admired by many and known as a mental health advocate and have many speaking engagements and ways to speak to the mental health community. What are the things you always try and point out when talking to people? My talks are different for different audiences. I think the one major thing I want to leave the audience with is hope. I want audiences to see the positive in my story. I want people to know that no matter how hard things are today, tomorrow is a new chance for things to change and be better. I want audiences to walk away having laughed, cried and then finally, smiled.

Do you think there will be a cure for bipolar disorder in your lifetime? I hope so, but I don’t think so. I think the brain is so complicated and our understanding of it so lacking, that it’s unreasonable to think this is a puzzle that will be solved in the next 50 years.

Why is your hair red?  It’s pretty simple, I just love it.

Author of Lost Marbles: Insights into My Life with Depression & Bipolar

Sunrise turns the derelict house across the street

I am inside watching.

There is nothing golden here. 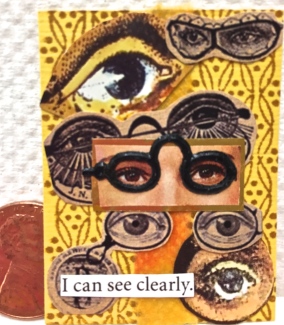