Struggling Up That Hill: Anger, Bipolar, & Me

Warnings for: the usual really – whinging, swearing, self pity

Today’s song is, of course, this one. Lately, I’ve been absent from this blog, due partly to depression, and partly because of other commitments. One of those commitments is National Short Story Week, which ended yesterdat. This is at least the third year that Sine FM and my show, Book It! has been involved. It’s hard work at times, but also good fun.

If you fancy hearing some cracking stories, you can listen to the podcast.

I’ve also been running up that work hill: night shifts, plus changes to work patterns, mean it’s been more of a struggle than usual, at times. I’ve written before about my tendency to feckin’ swear, sometimes at considerable length, and with additional blasphemy. This can upset listeners, and passersby. Which is fair enough, even if swearing helps relieve my stress.

Recently, I’ve been running up another hill, as well as the sort of thing which, given I’m fat, in my late 50s, and have a knackered left knee, might as well be hills:

Many fellow Doncastrians will recognise the bridge above: it’s at the non-shopping bit of Lakeside. The internet tells me that the artificial lake was created in the mid 90s, which helps explain why the small hills which were created in the process are looking more and more, well, natural. 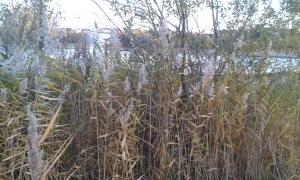 I’ve started jogging for a variety of reasons: training for a race in March 2017; hopes of using that race to raise money for mental health charities; a desire to get fit, and – cross fingers – lose weight, plus, I know being out in Nature helps me.

In addition, I was inspired by a young man with bipolar, talking about how running helps him. He was one of several people, including Alistair Campbell, and Frank Bruno, who spoke frankly about their mental health, in a recent programme on Channel 5. While there were at least two who talked about bipolar, it was this (formerly) angry young man who I identified with the most. If running helps him with his anger, highs, and lows, why not me, too?

Thanks, mate. I wish I remembered your name. Because, so far, so good. 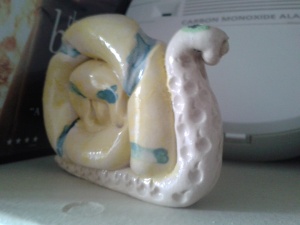 A clay snail I made in the ward years ago, and gave to a friend, symbolizes my current running pace

This entry was posted in Read Along and tagged anger, bipolar, mental health. Bookmark the permalink.