I’m not sure if who I am comes through on here but here’s a story. I got a random text today from someone I didn’t know. Usually I just delete and block people. Today I read the message And it was obviously a woman worried about her kids. I texted back and said I’m sorry you got the wrong number but this seems important so I wanted you to know. She was thankful and said it is very important. I asked her name and told her I would pray for her and her daughter. I also told her I know how hard it is when our kids are making bad choices so if she needed to talk she could message me anytime. This isn’t the first time I have done something like this and I know it won’t be the last. I’m not afraid of true. I’m not afraid of understanding how someone is thinking or feeling, even when I don’t always agree. This woman needed someone it’s like I could feel it through the text.

Also, yesterday I made a Facebook post about a lady I used to work with that I love. She was so good to me. Sounds totally normal right? Well, not 30 minutes after I got to work today who shows up in my window but that lady. Keep in mind she lives one the other side of town and I only work at the time I work today 2 days a week.

I don’t know how many people in the world have things like this happen to them. But it’s amazing AND kind of scary and a LOT creepy. I don’t know if this happens because being bipolar helps me be more intuned with my subconscious or my emotions. I don’t know if I have a faith in God that allows what HE wants to come through to my real life. I just know for as long as I ca n remember there are just things that I KNOW sometimes. I will know I need to make a call or go see someone. Very few people have ever believed my “feelings” either. It’s not a psychic thing if that’s what your thinking. It’s like the lady I told you about. I haven’t worked for her in years and I was just thinking about her yesterday. I’m not sure why but I know there’s a reason I was thinking about her and I saw her today.

I think that’s enough for one day. I will be trying to keep up better and letting y’all in on some of my life and secrets to staying stable. Be blessed and have a great weekend!!

Whoever said “Old age is not for sissies” must have been talking about Medicare insurance plans. Well, I’m not old yet, but I’ve spent the better part of three days trying to figure out the hows and whys of this incredibly complex program. I’ve also been to a meeting in which a caseworker explained the basics, and I ended up more confused than ever. Which makes me wonder, if I’m having such a hard time, what must it be like for people who are doing this completely on their own, and perhaps with less understanding of the overall health care system than I have?

I have two full-sized publications about Medicare and how to choose the right plan for the individual. My main concern is, of course, about prescription medications and the outrageous prices I’ve been paying for them, so finding a Part D (drug coverage) plan was of the utmost importance.  The counselor I saw was trying to get me to go with a Medicare Advantage plan which would have covered Part A (hospital) and Part B (doctors and other health services) in addition to Part D…one-stop shopping, as it were.

But as I delved into the meat and potatoes of the thing, I found that I’d be limited in my choices of providers, and with a new psychiatrist who only accepts patients with Original Medicare I couldn’t take a chance on losing out. I can’t find a psychiatrist anywhere in my local area, so I’m going back to the clinic where Dr. Awesomesauce used to work; luckily, I was able to find one who not only takes Medicare and is open to new patients, but I was able to get in as soon as early October.

This is a good thing. I’m still very stable underneath all the sadness, but having lost both my therapist and psych nurse practitioner, I need to be under somebody’s care ASAP. I hope I like him; he’ll never be Dr. A, but maybe he’ll be as good in his own way as Dr. A is in his.

Anyway, after spending an entire afternoon researching the recommended Medicare Advantage plans and finding them wanting, I decided to go with a Part D plan for the time being and keep Original Medicare. Because I qualify for what’s called Extra Help, which is a low-income subsidy, my meds will cost me only about $80 a month, rather than $800. Yippeeee!

I still don’t really know what I’m doing. Nor do I understand why this process has to be so damned complicated. I feel sorry for anyone trying to navigate the system without guidance. Even the (biased) assistance from the Medicare counselor was of some use. But it was my ability to utilize the Internet that got me this far into the maze of programs that make up this vast government entity, and I’m really, really thankful for it. I used to be afraid of it, you know…before I graduated from college, I was required to take a computer course which involved Internet usage, and I was terrified of breaking something or messing up the computer beyond repair. I needn’t have worried, because I’ve owned several computers and haven’t killed one yet.

It remains to be seen how successful I’ve been with enrolling myself in Medicare. I’m just glad I’ll have it on October 1st, as I’ve blown through what little savings I had paying for meds. Whew!

I went to the grocery store, bought everything I needed for four meals, and came home without emotional drama.   FInally something I have searched for for quite some time is here–peace.   I don’t know what to put it down to except prayers for healing and the wonders of modern medicine.

Got the response on my essay for class. She loved it except for the lead paragraph. SO I need to work that over if I’m gong to send it out.  But I don’t think I will.   What I wrote about isn’t really something I want out in the wild just yet.  I want to save it for my book.  So we will see how that goes.

I’ve been stuck on listening to Duran Duran the past few days.  I’m not sure why.  But I’ve been enjoying their greatest-hits album I have and  trying to inspire myself to write something new.  I did write something completely new Tuesday that I’ve been revising on since.  It’s a really dark piece inspired by the rejection I got that challenged me to explore NEW territory.  So I came up with something  I’ve not seen written about, fiction or nonfiction.  So we will see what they think about it when I submit it next Monday.

Hope everyone has a good weekend!

I knew when I posted this pic that ya’ll wouldn’t let me down and you proved me right. A lot of outstanding responses, but as you know there can be only one winner.  Here’s the pic that was posted on Wednesday:   The winner of this week’s Crotchety’s Golden Unicorn Award is… Janet Coburn for “Marie wasn’t sure what ‘muff-diving’…

The post Caption This Award Winner appeared first on Insights From A Bipolar Bear.

Posted on September 9, 2016 by Yve's Corner | Leave a comment
For those of you interested, I’ll be painting a series of paintings as a tribute to Ulla (Blahpolar). I want to sell them and all profits made will be donated to the clinics she went to in the Eastern Cape, South Africa. It will be an ongoing project. Spanglish Familia will be helping with the … END_OF_DOCUMENT_TOKEN_TO_BE_REPLACED

Posted on September 9, 2016 by Manic Monique | Leave a comment 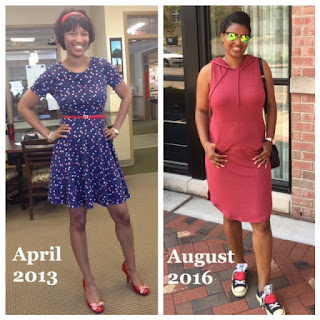 One of the enduring effects of my psychiatric medication side effects is the weight gain.

Side effects can occur when one starts a new medicine or when there is a dose change in a medicine one is already taking. I had a medicine dose change, an increase, in 2013, shortly after the picture on the left was taken to control a manic episode. In 2013 I gained 52 pounds over the span of a three- or four-month window of time.

In 2015, while manic again, I managed to lose about 25 pounds or so. I wasn't consciously trying to lose weight, I wasn't exercising, but when I'm manic I eat less. I wrote about my weight fluctuations last year. But since then I've gained all the weight back. I think it partly had to do with my birth control.

I used to avoid taking pictures after I initially gained the weight. I was used to being thin my entire life and to all of a sudden put on so much weight... I didn't like the way I looked in clothes. I felt frumpy.

Now, I make an effort to buy clothes that flatter my shape. And it doesn't hurt that my boyfriend likes my current body. It's a great boost to my self-esteem and body image.

I'd still like to lose some of this weight. I don't need to get back down to 128 pounds (I'm currently 169 pounds), but I want to be smaller. I haven't been exercising consistently. To change that, I signed up for a fitness class held at my town's recreation center. The first class is next week. I'm hoping to attend regularly.

Reblog – An Invitation: JOIN ME on SEPT 10th to Honour ULLA’s Life

Originally posted on My Spanglish Familia:
Dear WordPress Community I am overcome with grief upon learning of Blahpolar’s death. I assume, many of you are too. Please join me and Yve on SEPTEMBER 10th, 2016 – World Suicide Prevention Day…

An Invitation: JOIN ME on SEPT 10th to Honour ULLA’s Life

Posted on September 9, 2016 by Kitt O'Malley | Leave a comment
Originally posted on My Spanglish Familia:
Dear WordPress Community I am overcome with grief upon learning of Blahpolar’s death. I assume, many of you are too. Please join me and Yve on SEPTEMBER 10th, 2016 – World Suicide Prevention Day…