Warnings for: rainbows, poutine, an owl bag, & a giant chicken

Each Pride I attend – yesterday was my fourth – brings something new: knowledge, locations, people, even food. To be present as the LGBT community struts its stuff is a wonderful, dare I say fabulous, experience.

Always, though, there are the communities within communities. Sadly, the LGBT one has more than its fair share of people who are also part of the community of human beings with mental health problems. Yes, it’s that nasty old nemesis, stigma, once again.

Stigma happens, stigma matters, yet we humans can, and do, move beyond it. Stigma is the core of the Time to Change message, and change is its goal.

Old fart moment coming up: I’m closer to 60 than 50, and the amount of social change I’ve seen in my lifetime so far is truly breathtaking. Yes, we have a long way to go to the Star Trekian goal of the original, multicultural Enterprise crew, where the all-to-human Kirk describes the half-Vulcan Spock as his “brother”.

And yet to have lived vicariously through aparthiad and then the presidency of Nelson Mandela in South Africa; to see more. and more black actors in major television and film roles in the States (1); cancer going from “the big C” of my childhood, to something which can easily be talked about; the Good Friday agreement in Northern Ireland …

… you get my drift. Yesterday, whilst watching several older, same sex couples walking around Sheffield Pride, I thought about how recently such relationships were classified as a crime. And I found myself thinking, “What’s the big deal?”

Truly, why all the fuss? Why should anyone care if Gary and Peter, or Sue and Barbara, want to be together? Why is that a problem, as long as they care about each other? Why should that be seen as different than Gary and Sue, or Peter and Barbara?

Likewise, as long as they can and do get help, why should anyone care that the person sitting, working, or living alongside them, has mental health problems? 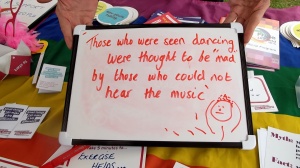 Mental health problem? Or a question of perspective?

Help is out there. And yet, because of that old devil stigma, many people delay getting it, often with terrible, sometimes tragic, consequences. Consequences which knock on to the lives of their family, friends, and colleagues.

One of the most distressing conversations I had yesterday about mental health, and its horrific consequences, was in the queue for some poutine. A Canadian classic, I’m tempted to describe poutine in British terms as “cheesy chips with gravy”, but that doesn’t do it justice. Whilst queuing, I got to talking to someone about a young man who took his own life. Sadly, it was one of those all too familiar situations where the first his loved ones knew there were problems was when they learned he was dead.

Death as the consequence of stigma – of the inability, for whatever reason, to tell someone, anyone, how they were feeling. A young life ended far too early. 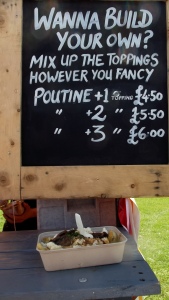 Spock, of course. would question stigma of all kinds. How, he would ask, is it logical to treat people differently because they have health problems, or because their sexuality differs from that of the majority of the population? Despite how far we’ve come in the human tendency to put people in boxes labeled “them” and “us”, we’re still far from logical, indeed far from as loving as we all have the potential to be. 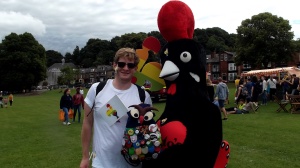 Owl bag (centre) wants to be something much, much bigger. Bless

To succeed in love, like work, like pretty much everything in life, comes down to communication. If we don’t tell other people what we’re feeling, what we’re thinking (2), then how can they possibly know what’s going on? This is the essence of Time to Change: talking naturally, with friends and family as well as mental health professionals, about how we are. How we feel.

As Spock would say, it’s only logical to change.

A lovely bloke, with a great pledge

(1) The first time I saw a black actor (Denzel Washington, I think) play the lead in a film which did not refer to his race, I was thrilled and stunned.
(2) I realise that there are thoughts – eg, an unsolicited comment such as “That dress looks awful on you!” – which are better off not shared.

This entry was posted in Read Along and tagged mental health. Bookmark the permalink.