Henry & the Land of Sentient Chairs 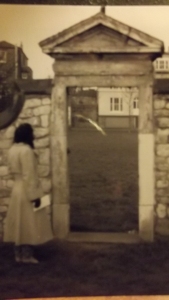 Portrait of the writer as a young woman, with the “Door to Nowhere”

Some short children’s fiction for you

Henry was out with some mates late one night when he spotted the chair. Henry was 10, so “late” meant it was fast approaching twilight. As for the mates, they were more like acquaintances, from school.

If he could, Henry might have said, “I’m test driving them, to see if they really are friends.”

He didn’t say it, as experience had finally taught him that remarks like that tended to be followed by being turned upside down in bins, toilets, and other, equally unpleasant places.

Henry was always a little weird, and too bright for his own good. Which is to say that the three other boys who were with him definitely were not, and never would be, his friends.

They were walking past the museum – of the four, only Henry knew what the building actually was – and towards what Henry privately thought of as “the doorway to nowhere”. It was the remains of an old hospital which, according to the words carved in the lintel, was dedicated to St Thomas, and built in 1534. The stone on the top, and the door surround, were all that remained of the hospital. The museum was built in 1965, which also when the doorway was moved to the nearby lawn.

Henry knew all these facts, and, until recently, was happy to share them with his classmates. The results of such conversations, unsurprisingly, were not so happy.

Which may be why he was the only one to notice that the chair was talking – chuntering, to be exact – to itself.

The others also noticed the old office chair, and spent a pleasant quarter of an hour or so pushing it, and Henry, up and down the pavement which separated the museum from the grass, and the doorway, on the other side. The three other lads did their level best to scare Henry to the point of shrieks, and tears. Once their goal was achieved, they dumped the chair more or less where they found it, and left for their tea, and home.

Henry lingered, in part because he was still a bit dizzy, but mainly because he’d come to the conclusion that the others were best avoided. Also, he could have sworn the chair spoke again.

“Who said that?” Henry asked, just to be on the safe side. Fortunately, the other boys were well out of earshot by then.

“I said, my wheels are killing me.”

There was no doubt about it: the chair had spoken. Although, as far as Henry could tell in the now darkening light, it didn’t appear to have lips, let alone a mouth.

“Your point being?” the chair replied somewhat testily.

Henry was temporarily dumbfounded, It had never before occurred to him that furniture could talk, let alone employ sarcasm.

“Apology accepted,” said the chair. “After all, it wasn’t you who decided to wheel me up and down that bumpy pavement at half past six at night.”

“I’m afraid you’ve fallen in with rather a bad lot,” said the chair.

“I thought being with them might protect me from the other, bigger lads, but it just means I’ve been shoved down twice as many toilets.”

“So there are bullies here, too.” The chair gave the furniture version of a sigh, then said, “Here I’d been thinking it was just the armchairs back home.”

“Back home? You mean, the office?”

“What’s an office?” asked the chair.

“It’s – “ Henry started to explain what one was, then, deciding it was just too big and vague a topic, asked, “Where are you from, then?”

“The Land of Sentient Chairs, of course,” it replied, adding, “Deckchair knows, I never should have wheeled through that silly old doorway.”

The chair swivelled in the direction of the remains of St Thomas’s Hospital.

“You mean you have that on your planet, too?”

“If by planet, you mean my world, then yes. It was the other wheelies’ fault: they dared me to do it, and … well, here I am.”

The more he and the chair chatted, the more Henry felt they had things in common. Not only were both of them lacking in real friends, as opposed to bullies, both were intelligent, and loved learning more than was perhaps good for them.

“It’s my upholsterer, and my molder, that I feel sorry for,” the chair said sadly. “They’ve only just started letting me play out after teatime, and look where I’ve ended up.”

“Upholster? Molder? Are they your – “

The words “mum and dad” died on Henry’s lips. He was a thoughtful boy, and didn’t want to confuse the chair any more than it already appeared to be.

Instead, Henry said, “You want to go home, don’t you.”

“Oh yes,” the chair said promptly. “If everyone in the land of fleshy two feet were as nice as you, Henry, I’d stay and explore awhile. But those three … I’d rather be taunted by a dining chair, any day. Or even a winged back armchair!”

When his new friend had finished speaking, the boy said, “If I gave you a really good,” he paused again, and instead of “push”, said, “wheel … do you think you might get back home?”

“It’s worth a wheel!” the chair agreed.

At half past eight on a chilly April night, Henry Bartholomew Brown helped a lonely black office chair travel through the Doorway to Nowhere, and back to the Land of Sentient Chairs.

Brief thought their meeting was, it was one Henry never forgot. He remembered it long after the sight of his mother half hysterical with worry, and the grounding she later gave him, passed from his memory. Thoughts of the chair gave Henry, not just comfort, but something approaching serenity. Which is why, as the months and years passed, his classmates taunted and tormented him less and less. After all, where’s the fun in picking on someone who merely shrugs when you’re turning them upside down in a bin, or shoving them down a toilet? 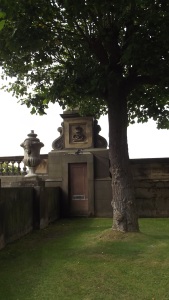 When he turned 16, Henry left his local school, and went to Oxford. There, being a bit odd proved less of a problem than the fact that he was several years younger than his fellow students. Over time, though, Henry found his feet. Ten years later, he was still at Oxford: the youngest ever fellow in the history of his college.

When Henry stepped down from his chair as head of his department at the comparatively young age of 50, his friends – by then Henry had quite a few – were amazed when he said he was returning to his old home town in South Yorkshire. They were even more surprised when he sold or gave away his many books, paintings, and pieces of lovely, old furniture.

“Travelling light?” one of the other dons asked as he watched Henry pack a single suitcase.

“After a fashion,” Henry replied.

It was said with a smile. For Henry knew there was an old friend waiting for him, on the other side of a doorway. 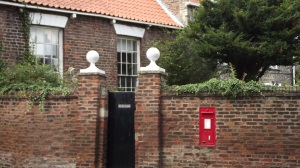 A doorway may also be a gateway: Beverley, 2015

If you enjoyed this story, please see the category “Storytime” on the list to the right. Or buy my books: “The Woodcutter’s Son“, “What! No Pudding?” and “Koi Carpe Diem“.