Poppies may make us sleep, but will it help us think?

I’m writing this in the garden, though I may have to break off and go inside. Because it’s a mite chilly, & I’m nesh.

Another day, another hospital appointment. But at least it’s a day off, which is why I’m sitting in the garden, annoying the very birds I’m trying to feed. Though to be fair, they’re probably more frightened of the cat than of me

This was supposed to be a picture of the cat on the garden wall. It isn’t, though it is the cat.

At a previous appointment I learned that I’m getting a blue boob, thanks to the dye they’ll inject during the operation. I’m sure they told me why they’ll be filling me with blue dye. I’m equally sure I can’t remember why.

I told my husband I want him to get me a little white hat, so I can be Smurfette. A  pornagraphic, chubby one.

Get your heard round that, folks. Or don’t, if you know what’s good for you. 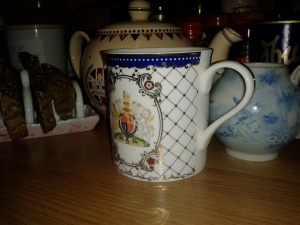 WordPress is running a bit wild and free today, perhaps because I’m in the garden. Which is a bit wild, despite my having weeded. Instead of a photo of a garden gnome, there’s a picture of the latest addition to my mug collection: a Rington’s cup which commemerates the Queen’s 90th birthday: her real birthday, in April. The official one is later this year, in what passes in Britain for better weather. The mug is a gift from the Beloved, and my only bone china one.

My favourite mug is currently living a life of leisure in the cupboard, on account of having a slight crack.

Queen of the feckin’ world, plus toast rack.

If I had to diagnose myself, I’d probably go for low level mixed episode. Meaning I’m active, but a bit cranky, and sweary. Also tired, which I’m told is probably an emotional thing, rather than a cancer thing.

Which is a good thing. Arrgggh, too many things there. This blog is starting to turn into an Adams family reunion.

The title of this blog refers to the fact that in many ways, I’d rather have early stage breast cancer, than the sort of mental health shite I went through in February & March this year. For starters, there’s the fact that people – at least, the ones I am fortunate to know – don’t tend to treat cancer as contagious and/or embarrassing any more. I’m glad I lived through and beyond the days when John Wayne did a serious of adverts about how he beat “the big C”.

Also, so far at least, no one has told me that this cancer is my fault, or that if I just do this therapy, or that therapy, I’ll be fine. Or, gods help us, to “pull myself together”. Sure, people have been surprised, upset, distressed even. But so have I.

I never would have guessed, poor naive bemused woman that I am, that talking about cancer would bring me head bangingly against blatant cases of mental health stigma.

The Elephant in the Room: Doncaster, 2012

The medical team told me my right breast will be sore and swollen for awhile after the operation, then asked questions about what I do. When I said I work in mental health, and that I plan to work as much as possible, they then asked whether this was a good idea, because what if someone attacked me?

For fuck’s sake. No, I didn’t say that, but I wanted to. Instead, I said that they are far more likely to harm themselves, than me. The biggest likely threat to my post-op, still poorly breast is if a client hugs me. (1)

I then heard the same thing, a day or two later, from another person. The bit about being attacked, not hugging.

The silver side to this ignorant, insulting black cloud of stigma is that I’m helping out at a Time to Change stall next week. It’s at a university in Sheffield, a city I know and came to love after many years of working there. 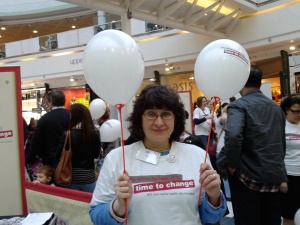