The Bleedin’ Road Goes on Forever

Warnings for: swearing, self pity, & tears before breakfast

Life, as Tull so beautifully put it, is a long song. And sometimes that’s so Spockin’ annoying.

I’m part way through yet another of those holidays at home which are substitutes for time off sick. Nothing terribly specific this time, just a collection of personal shite, some of which has back stories which are so long, they could fill several shelves at my local library. With volumes that would make “War & Peace” and LOTR look like slim-line novellas.

Maybe I was a people pleaser before I started working in care. Maybe it’s me wanting to make up for all the emotional, financial, physical, & you-name-it havoc and chaos I created during the worst of my bipolar disorder. Maybe it’s a biological and/or conditioned part of being female.

These days, though, unless I’m in the absolute depths of despair, I feel that if I’m not making others happy as well, I’ve failed. 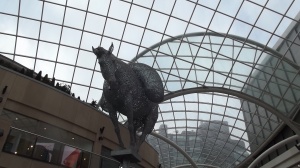 Pack horse as symbol of the human condition: Leeds, 2016

Meanwhile, I’m staring 60 down the barrel of a metaphorical gun that’s a few years away yet, and it’s not a pretty sight. If I were the victim of a tragic accident, I tell myself when I have too much time, gloom, and imagination at hand – and I always have the latter, and just now the former two as well – what would the headline say? Normally, for a woman of my age, “Mum of x” – where “x” represents number of children. Or even “Grandmother of x”.

But my “x” is an “0”, and my biological clock struck midnight years ago. And it’s probably as well I didn’t have kids, given the hell that was menopause. 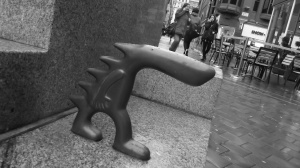 Weirdly, I have just said that I have too much imagination, yet at the moment, I feel like I can’t write for toffee. (1) Or even tea and biscuits, which we actually have in the house.

What makes this particularly self pitying is that I have met loads of people with far worse metaphorical packs on their backs: bigger, heavier, messier. You name it.

I have to get a handle on this. Because I can’t face going back on meds (again) let alone back onto the wards (again). Because I don’t want to drag my husband or friends through the mud and gore of my particular brand of mental health hell.

I had a lovely time in Leeds yesterday, with my favourite person in the world. Took lots of photographs: even experimented with the black and white setting. Yet, when I tried earlier today to write something even mildly creative?

The best thing that could happen to me just now is probably getting stuck into a writing  project. But I’m creatively constipated, in part because I’m in despair. Which just leads to more despair.

Like a figure in an Escher drawing, stuck on the same damned stairwell, with a note in their back pocket reminding them that it doesn’t really matter, anyway.

(1) Near as I can trace it with a quick internet search, that’s part of a quote from the Regency period Blackadder.