Jonah Got Right Pigged Off, When the Plant Died: a Poetic Blog 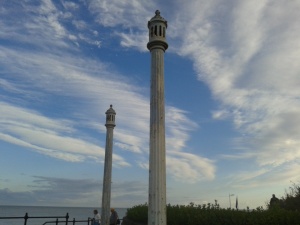 I love titles: the book, poem, etc, kind. Faced with a selection of poems where one is named “Love”, and another is titled “The REM 125 to Cleethorpes” (1), there’s no question: I’d be on that poetic train.

Strangely enough for a Pagan, (2) I’ve written a number of Biblically based poems over the years. Nice to know all that time spent making dioramas in Baptist Sunday school when I was knee high to a locust wasn’t a complete waste of time.

This poem had the honour of not quite making it into a Northern poetry magazine. According to my handwritten note, it dates back to 1995.

Jonah Got Right Pigged Off, When the Plant Died

How it happened was this:
God sent
a whalish big fish, which
swallowed the prophet, whole.

This was God’s way
of asking for volunteers.

Jonah was sent
that the people of Nineveh
might repent
of various and sundry
of their wicked ways.

Which they did, leaving Jonah
in a bit of a tizz.

He felt let down.
He wanted the people
of Nineveh to drown,
be plagued by locusts,
consumed by fire, or hound.

God kept
his side of the bargain:
the people of Nineveh
were spared.

But the plant,
which he made to shelter
Jonah from the sun,
died.

(1) Yes, there is such a poem.
(2) Or not so strangely, given the title “Musings of a British Eccentric”.