Out for a stalk: Beverley Minster, Sept 2015

Warnings for: frankness, mention of suicide, & a plea for goddamn gun control. Oh, and swearing. And also Kula Shaker, because I’m a middle-aged hippy wannabe

Sooner or later, mental illness is going to get you: you, or someone you love. So there’s no use crossing that road, or asking us to ring that crazy warning bell: not unless you fancy having a jingle yourself.

With one in four adults, and one in 10 children likely to have a mental health problem, you can dodge that mental health stigma bullet, but you just can’t hide.

Speaking of bullets, the recent shooting(s) on American campus(es) have of course saddened me, but they’ve also got my bipolar goat. 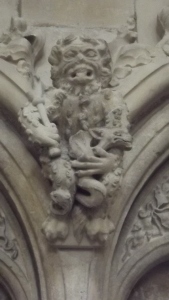 Based on the non-scientific poll that was my Facebook feed, quite a few people in America seem to believe that the way to prevent yet another mass shooting is to stop people with mental illness from buying guns.

Nice one, but how are you going to screen out the people who develop mental health problems later on? I’m no bookie, but I’d say a one in four chance is pretty high odds. And that’s merrily skipping over the fact that more Americans die in arguments gone wrong, and accidents, than from other people going postal.

Don’t care whether or not they, or someone dear to them, gets shot, and dies.

Don’t care about mental illness, because it’s never going to happen to them.

To borrow from my Christian upbringing, “in the midst of life, we are in death”. And in the midst of comparative mental health, we all carry the possibility of mental illness. And if you think it’s okay to carry a gun in your glove department,  or to walk around a dime or department store with a gun either openly carried, or legally concealed, then, well, please let me know.

Because I’ll make a swift exit. A polite one, mind, because gods know I don’t want to piss you off.

The “we” in the title “We’re Still Here” is those of us who battle with mental illness. Because sometimes, it is a battle. If you think it’s easy to live with bipolar, or schizophrenia, or personality disorders, or the more common mental illnesses of depression, and anxiety, well … wanna buy a bridge? 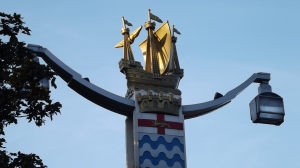 Some of us, of course, aren’t still here. Because we’ve killed ourselves. In some cases, with guns. Which – given a long history of suicidal thoughts, and several attempts – I am never going to own, or live in a house where one is kept.

The wheels of my bipolar bus – which are often wonky – all but came off recently. And yet, I didn’t shoot anyone.

Why? Well, for starters, people with mental illness are much more likely to harm themselves, than others. Those school shootings and “going postal” events made and continue to make the news because they are unusual. Never, of course, unusual enough.

I also live in the UK, where guns are hard to come by. Which is a good thing, as it significantly drops the odds of my ever shooting myself. Plus, battered and frayed at the edges though it is, we still have the National Health Service (NHS). So I can get some help with my mental health without having to think about “copays” (1), employers’ insurance, and other, bankrupting worries.

We also have several excellent national mental health charities in the form of Mind, and Rethink, as well as a brilliant anti mental health stigma campaign, Time to Change.

Please, America: ditch those guns. You can put some of the money saved on mopping up after shootings into physical and mental health care.

(1) Whatever the hell they are.

This entry was posted in Read Along and tagged America, bipolar, mental health. Bookmark the permalink.