Why my Vulcan gently weeps

Warnings for: Swearing (duh), substantive sci fi references, & an elegant sufficiency of alternative swear words (because anything else would be flippity-floppity).

Why, oh why, is swearing such goddamn fun? And – especially for non-smokers, though I’ve met plenty of smokers who can swear like a starship full of sailors – such a great Spockin’ release?

I wrote previously about my intention to give up cursing for autumn. I said that it wouldn’t be easy. And, to quote Sir Percy Blakeney, Bart.,” Zounds! I was right.”

Sir Percy is best known as the Scarlet Pimpernel. His creator, Baroness Orczy, was described on the back of my sister’s battered old paperback as ” a vigorous and colourful personality”. At the time I first read that description, I was around 12, and thought “‘Strewth, that sounds pretty cool!” (1)  Now, however, I’m in my 50s, and think, “Spock, that sounds suspiciously like me – minus the success, title, and other cool applications.”

“Vigorous and colourful” here standing for “Opinionated, weird, and swears like billy-oh”. (2) With custard ‘n Dream Whip and pouring cream on bleedin’ top.

Why, oh why, if I had to move countries, did I have to move to one with such a blindingly top-notch collection of swear words? How pitifully feeble is the American son of the dog, when compared to its amazing British bollocks? 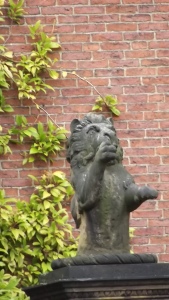 No, I am not a dog. Yes, my Spockin’ nose itches. Now leave me alone.

Hence, my search for alternative swear words. At first, I thought of the biscuit-related “Crumbs!” and its relative c-word, “Crikey!” But they seemed pallid, and dull, compared to The Real Thing (3) Then I thought of Sir Percy, and such delightful expressions as “God’s Teeth!” But that still carries the possibility of offense, even in a religiously apathetic country such as England.

But hark! Who’s that stretching out his fingers in a surprisingly difficult gesture, wishing me peace, and long life? 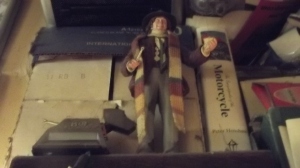 I am not the Fourth Spock

I owe my new lease of Spockin’ life to one of my favourite bloggers, Blah Polar, who found or constructed an amazing bit of computerage (4) depicting the ST:TOS triumvirate of Spock, Kirk, and McCoy dancing some mean Federation disco. From there, it was an easy leap to the phrase “Great Dancing Spocks!”

By the Great Blue Box!

Even better, though, is the short but vigorous phrase, “Spock wept!” Because, being a Vulcan, Spock doesn’t weep. Well, only in every fourth or fifth episode, tops. And even then, only because the scriptwriters made him.

And so unlike me, or certain blinkin’ angels I could mention.

(1) Yes, via the osmosis of picking up the book, I had already learned to swear like not only Sir Percy, but also his best mate, Sir Andrew Ffoulkes.
(2) I believe Mr Oh is a cousin of that other well-known Billy, Mr No Mates.
(3) If you think I mean a certain dark coloured fizzy-drink, you really haven’t been paying attention, now, have you?
(4) Technical jargon, me? Surely you jest. (5)
(5) Don’t call me Shirley.

This entry was posted in Read Along and tagged America, bipolar, mental health. Bookmark the permalink.