Vincent, the Doctor, & I: A Blog for World Bipolar Day

Gerald C Dalek, Jake the cat, & a pre-diagnosis me

Wherever you are in this world, if you meet 100 people, at least one – give or take, I don’t know who you hang out with – will have bipolar. Aka, manic depression.

It could be me.

“Happy Bipolar Day!”may not be quite the right thing to say to someone with the condition. My own happiness can be so OTT as to be frightening: for me, as well as those around me. The most terrifying part of that big scary ball of extreme happiness + irritability + impatience that is mania, is that I blank out. I literally do not remember some of the things that I did when I was manic.

The paintings of Van Gogh are part of my childhood, thanks to reproductions of “Sunflowers” and “Starry Night” which hung in the corridors of my elementary school. The song “Vincent”, by Don McLean, was part of the soundtrack of my teenage years. It used to make me tear up, decades before my own diagnosis came down the pike. 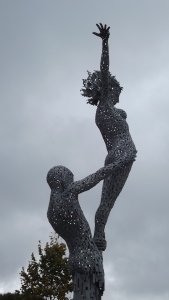 More recently, the “NuWho” episode, “Vincent and the Doctor”, gets my nomination for one of the most gut-wrenching moments ever in the history of “Doctor Who”: classic, and Nu alike.

It’s the moment in which the Doctor, in quite an unusual move for him, takes Vincent for a trip forward in time. The man who famously sold only one painting in his life gets a chance to see a present day gallery full of his work, in a Paris museum, no less. And to hear a curator, played by actor Bill Nighy, call Van Gogh “the finest painter of them all”.

The look on Vincent’s face has me in floods of tears every time.

Van Gogh was diagnosed with bipolar after his death. I don’t know if  that diagnosis is accurate, or not. What can’t be disputed is that Vincent struggled with his emotions, to the point of going into an asylum for awhile.

Where, interestingly enough, he did a lot of painting. Tedious wards which persist in leaving patients with little to do, please take note.

Vincent is also unfortunate in being someone almost as famous for his death, as his life. Aged 37, he attempted suicide, and died two days later.

Van Gogh’s story is as unusual in many ways: sadly, in the manner of his death, not so much. Manic depression carries with it a tendency toward frequent, intense thoughts of suicide.

And I have so been there, done that. Sound like hell?

Beyond his magnificent art, and the joy and inspiration it continues to give, there was hope, bright as sunflowers, in Vincent’s life. Vincent, for all his sorrows, had friends. Above all, he had his brother: Theo.

This blog  is for you. All of you who have ever extended friendship, support, and understanding toward those with bipolar. Carers and friends, lovers and mothers, colleagues and cousins: Thank you.

And this one’s for you, love. Without you, I would never have survived, let alone – however messily, embarrassingly, and even barely, at times – thrived. And whilst I appreciate everyone who ever has or does help me, it’s you who stands – wise head and broad of shoulders – above them all.

Through the years, you’ve been there. And you’re still here.

So, happy World Bipolar Day, dear heart. As always: “not too happy”. 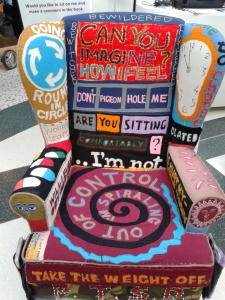