The Tiger Stripes of Survival 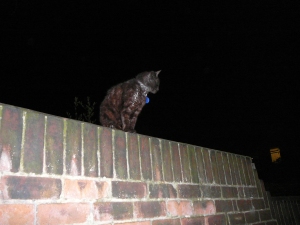 The late Thomas: “I am a wild and untamed thing.”

Mother’s Day is a bit of a drag when you neither are, nor have, a mum. My speculative children are very remiss when it comes to sending cards, and chocolates. As for my own Mom, I hope there are books, and cats, and sweets in the next life. (1)

“What immortal hand or eye/
Could frame thy fearful symmetry?”
– “The Tyger”,  William Blake

I do like a bit of Blake.When, many years ago, a friend was getting married, and was stuck for hymns, I suggested “the feet song“.

Much as I love Blake’s “Tyger”, and enjoyed watching the zoo’s Siberian tigers play in the Detroit snow when I was younger, it’s not actual big cats that are on my mind. Nor their delightful small cousins, felix catus, many of whom I have counted as friends and companions over the years.

If, like me, you’ve wasted a lot of time on Facebook over the years (2), you’ve probably seen a closeup of some anonymous woman’s stomach, with the caption:

Except, given it was on FB, it probably said “there’re”. Because in Facebook, no one can find an editor. Or a dictionary.

But enough of my cattiness. The point is, some of those women have other scars. Scars which they share with their fellow, childless sisters. And brothers.

Some scars are literal, and visual. Others, hidden in the depths of livers, and kidneys, and hearts. Oh, the hearts.

And they ain’t tiger stripes. Or indeed, just scars. They’re the marks of survival.

I can ruminate over what I don’t have, including kids, til the cows come home. (3) I can feel regret, and shame, and most of the other, more unpleasant emotions, thinking about what happened in the run up to my gaining my own scars.

Alternatively, I can drop my handbag, do a spot of “Dad dancing” (4), and sing along with Gloria. Not the verse. Just the chorus.

Tiger? Survivor? Both? To quote Ian Anderson of “Jethro Tull”: “Join the chorus if you can”. And if you want, of course. 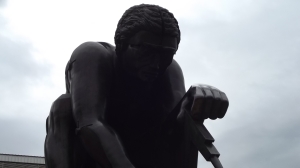 “Newton” as imagined by William Blake, at the British Library

(1) Mom, I hope you’ll show me round the next life, if there is one. Because you’ll know all the best libraries, lunch counters, and cats.
(2) Years which, like the time spent watching “Baretta”, and “Doogie Howser: MD”, I’ll never get back.
(3) Why do cows struggle to return? Why don’t they have the homing instincts of pigeons, or sheep?
(4) Dad dancing: it’s not just for blokes, or fathers.