Where do we draw the line between inspiration, and imitation? Who decides whether “West Side Story” is a fully fledged work in its own right, rather than just another “Romeo and Juliet” remake?

It helps, of course, when you have Leonard Bernstein. Everything’s better with Bernstein. I wouldn’t mind hiring him to write the background music to my life. (1) Except, damnit, he’s dead. In which case, please may I have George Winston ? (2)

Back to imitation, and art. What if the subject is photography, and Henri Cartier-Bresson, the classic “Life” magazine photogaphers, et al, aren’t exactly quaking in their boots? (3)

I’ve been taking pictures for awhile. These days, with a slightly more deliberate eye toward this blog. Sure, I could scour the net, and get smarter, clearer, and infinitely better shots, but:

1) There’s the question of rights. And, er, legal stuff.
2) Where’s the fun in that, compared to snapping away myself? 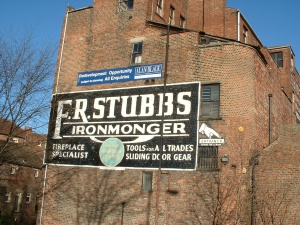 FR Stubbs, York. For all your iron mongering needs

Just as there are two schools of novel writing thought, ie, “planners” v “pantsers” (4), so too with photography. Some, like our mate Eric, and my Dad – both keen photographers – take lots of snaps, then cherry pick the best. Alternatively, Cartier-Bresson would apparently set up his camera for a portrait, then spend hours waiting for the ideal moment to take a few pictures.

As befits a pants-ing writer, I tend to simply snap away. Looking back at my digital photos, I can generally work out whether I had a good year or not. Did I take a lot of pictures? Are they organised into folders? Did I give them titles such as “Jake Enthralled” or “The Demon of Christmas”, rather than leave them with names like “P2004739″?

All these, save the first, are usually promising indicators.

I started taking pictures of painted signs following a visit in the early 2000s to the Detroit Historical Museum. As well as viewing some of the static displays, and buying a pencil with a baseball pattern (5), I spent quite some time checking out an exhibition featuring photos of painted signs.

I cannot recall the name of exhibition, nor the name of the photographer(s). I do remember seeing a picture of the Eveready “Nine Lives” cat. The thing that struck me most – above the artistry, even beauty, of some of the signs – was the point that this was a history that, if not captured by photography, would by its nature fade.

Sadly, I didn’t manage to snap any “ghost signs” (6) during the rest of my stay in Detroit.  So far, my collection is made up of ones I’ve seen in England: predominantly, Yorkshire.

Over the years, the collection has morphed and expanded to include all sorts of signs, including street and shop names which amuse me. I’ll close with what I call an “accidental” sign, which I happened to notice whilst working in Sheffield some years back. 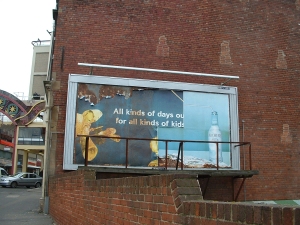 Don’t think anyone will forget that outing.

(1) “The only problem with life is that there is no background music.” – Anon.
(2) Equally great whether he’s performing other people’s work, or his own.
(3) Or practical shoes. Because who takes great pictures when their feet hurt?
(4) In British English, “pantsers” should be “trouser-ers”. Unless, of course, the writer in question spends a lot of time in their underwear.
(5) You simply can’t wait for my blog “In Praise of Pencils”, can you?
(6) My former flatmate, Karin, who conducts historical tours of Detroits, tells me that this is the term for such signs.