I am sooo far out of a comfort zone my skin is crawling off my bones. It’s been three days of up, down, calm, freaking out, things going right, everything going wrong. Flotsam. Jetsam. Ass trash.

Thurs night: Anxiety kicked into high gear because I knew I had to get up in the morning to go to the shop, which equaled insomnia. By the time I started to wind down around 1 a.m…. This netbook completely crashed and gave the blue page of death. There was NO sleeping after that, I went to freak out mode trying to diagnose the problem. HP was useless. Finally did a recovery, but the backup part failed so I lost everything. Most was stuff I’d backed up, but some I hadn’t (20 Chapters (about 300 pages) of a story rewrite I’d been working on for 2 months. I thought about copying to an external at least once a day and it never happened. I have become…”I was gonna” person, the exact kind of assholes I hate.
Anyway, by 6:30 a.m. I had it up and running again so I caved in to exhaustion. And the alarm went off at 7:30. So then it was up, ready me and the kid, run out to pay bills and grab a few things. I was the walking dead in an unsexy way. So of course I went to a store where I couldn’t find something and there wasn’t an employee in sight to help. I walked around for 20 minutes, figuring if nothing else, someone watching the theft cameras might get suspicious thinking I was casing the place and emerge to help.
Never happened and I left very pissed off. Only to have the car not start. Problem with the battery cable. I got it running then went home.
Only to have to go back into the dish to go to the shop. My mood was vile. So of course some random elderly stranger decided it was a great time to accost me at Walgreen’s and conduct a five minute ramble about an episode of Maury Povich. Nice old man but please, I was ready to snap. Got to the shop…Only to be sent back into the dish on an errand for R.

Fortunately, the mood lifted around the time he said he had onre mote part for me to order than I could leave. Unfortunately, LIES, because I was still there an hour later. He suddenly remembered what he needed done.
It’s like the cosmos knows when I am in ticking bomb mode. That’s when it throws curveballs at me that keep me in the danger zone where I am trying to control an insanity not even meds can take on and win.

Once home, it was gravy thanks to whiskey. Ordered pizza and parmasan bites, which made me very happy. Slept off and on, but it was a decent sleep and I think I earned it.

Today started out bleak and hopeless, no motivation. Once I finally threw myself out the door, we hit a few yard sales and grabbed some groceries, then came home. It has been vegetation day since. Aside from a grueling visit by my dad and his clan (at least he fixed my battery cable issue on the car) it hasn’t been horrible. I tried a new pork chop recipe. I wasn’t impressed with them but the gravy I made was decent. If you discount the fact the lid of the pepper bottle came off and made it way too peppery.

Still battling my kid. Her tantrums are on my last nerve but I am doing the discipline bit. I’m not as strict or stringent as Becca, but I don’t want to be. There’s a fine line between expecting a kid to behave and expecting them to behave like an adult because it’s what inconveniences you less. I knew a lot of adults like that when I was a kid. They were why I didn’t have much of a childhood. I won’t do that to my kid. Let Becca be the badass dommy discipline wench. I’m good being consistent but not unwilling to strike a compromise for household peace.

I am betting the only part about returning to England next week Becca is truly looking forward to (aside from her precious Yorkshire tea) is not having to listen to my kid’s tantrums anymore. I’d climb in her suitcase to escape it myself but that would leave Spook home alone with cats and I love my cats too much to endanger them like that. (Joke, people.)

Anyway…my mood has fallen into this low restless place where I feel so uncomfortable it’s disconcerting. And my ocd brain keeps reminding me what would help (alcohol) but I know it’s not the answer. Doesn’t make the yearning for a different mental space to go away, though. If my meds did it, I wouldn’t want alcohol. Happy pills, my ass.

It’s all flotsam, jetsam, and ass trash. And this netbook feels like someone else’s no matter how many programs I reinstall. It’s like wearing new shoes. Until it’s broken in and laden with my stuff, it’s going to be uncomfortable and leave blisters to the point I don’t want to deal with it.

Posted on August 2, 2014 by Manic Monique | Leave a comment
I have an interview next week! It's Tuesday August 5th at 9pm with the Black Women's Empowerment Network.
You have two options to listen in: You can call (714) 583-6852. Or you can log onto http://www.blogtalkradio.com/bwewomenempowerementradio.
Please tune in! 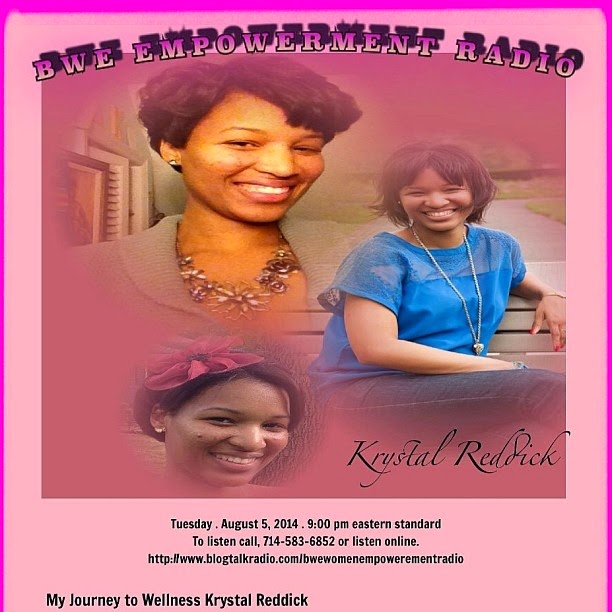 I got a call from Dr. Awesomesauce’s office this morning, which was supposed to be a reminder of my appointment set for Monday, but turned out to be a request to push it back a week because of changes in his schedule. Of course it’s not a problem, I’m doing fine and can certainly wait another week to see him (although after this weekend’s garage sale I’m sure I will need therapy). But I don’t like the implications of “changes in his schedule,” because I know how freakishly hard he works and that he’s been less than thrilled with his situation at the mental health clinic for some time.

The man works six days a week. I know this because he told me so at our last session. Not only does he work three half-days in the clinic and two and a half days in his private practice, he is also a consulting psychiatrist for the hospital AND a clinical professor. I told him I was worried about him getting burned out, and he admitted to me that he was already pretty crispy around the edges. Who wouldn’t be? He’s got more energy in his baby finger than most people have in their entire bodies, but even the Energizer Bunny’s batteries need recharging every now and then.

This is not the first time I’ve had to worry about losing my psychiatrist. Things have been dicey at the clinic for well over a year; in fact, there was a point last fall when the hospital was trying to get him to give up his clinic patients, and he did reduce his hours. But I also know he’s been restless for quite a while, and that he stays on mainly because he really loves teaching residents; if he didn’t, he would have gone back to full-time private practice a long time ago.

At one point, we had this settled: if he gave up the clinic, I would follow him to his private practice and pay cash, or use insurance if I had it. But that was when I had money; now I can barely scrape together enough to pay the rent and bills, and there is absolutely nothing left over for frills, e.g. therapy. At the clinic, I can at least put it on my tab, which is growing larger and larger (although why I’m still not getting bills is a mystery). But if Dr. A goes, I’m in a world of hurt—not just because I’d have to start over with another doctor, but because I don’t WANT another doctor. It took me over a year to trust this one completely, and I don’t relish the possibility of having to see someone else who doesn’t know me the way he does.

It’s bad enough that I just lost my primary care physician of over 20 years. I feel bereft of his laconic wisdom and even his badgering, but I can deal with it. Losing Dr. A would be a clusterfuck, plain and simple. This man has literally seen me at my worst and never judged me. He challenges me intellectually; he makes me laugh; he makes me think. I am never allowed to get away with half-assed responses to his pointed questions, but neither am I allowed to leave the office without feeling better than when I walked in. We talk seriously; we tease each other unmercifully; we share funny stories. And it all works. Now how do you replace a one-of-a-kind doctor/patient relationship like that?

Short answer: you don’t. And while I will undoubtedly survive if Dr. A gives up his clinic practice, I can’t imagine actually anticipating sessions with another doctor. Besides…..who else is gonna give me crap about that yellow toucan shirt?