Holy Shit was I a whirling dervish today!!!  I am really turning into quite the list-maker, because I like to cross things off the list and feel like I’ve accomplished something.  I am trying to navigate Colorado’s insurance marketplace, and let me tell you, it is the definition of a Cluster Fuck!  Something is $300 a month, but you have a $5000 deductible and 30% coinsurance (an ugly word that means you have to pick up 30% of the bill).  They have different classifications of drugs, Specialty drugs, Generic drugs, they all have different coverage.  And to try to figure out if ECT is covered?  Forget about it.  I called Boulder County Health & Human Services to make an appointment to talk to a health care specialist, and I had to leave a message with a promise of a call back within 48 hours.  So!  in the meantime I signed up for COBRA (continuing insurance through my former employer) and scratched out a check for almost $700.  For a MONTH!!!  Shoot me in the big toe.  That hurt.  Bad.

Off to Grill Night at Haystack Mountain Golf Course, this is a beautiful country golf course where they cook shit up on the grill and have live music, it’s a wonderful summery thing to do.  Slim Shady will be here any second to pick me up.  Oh, and I’m having over people from my DBT Group tomorrow night, so needless to say I still have a shitload of things on the list as far as spiffing up my house, but I’m excited to catch up with everyone and review some DBT Skills.  Definitely worth the study and that DBT shit has helped me through some bad mood crashes, let me tell you.

I’m going to try to fit in one more thing from the list before SS gets here, so off I go!  Peach out homies and don’t forget to eat your vegetables!  :P

You’ve probably seen the bumper stickers asking people to “Practice Random Acts of Kindness.” The message is good, but how many of us actually make the effort? One organization, called “Thank You Ninjas” is doing just that with a simple mission: to secretly thank the world. How do they do this? By sending anonymous Thank […]

Posted on May 28, 2014 by Oh Temp (BipolarUnemployedLost) | Leave a comment

What Everyone Ought To Know About Mental Illness

Posted on May 28, 2014 by Oh Temp (BipolarUnemployedLost) | Leave a comment

May is Mental Health Month, promoting the importance of overall wellness with the theme “Mind Your Health.” The focus, though, remains on mental health.

In our nation, as much as these complex topics are discussed, mental health and mental illness are sometimes truly misunderstood.

This misunderstanding is one of the main reasons stigma can surround mental illness. In honor of Mental Health month, here are some of the best visual representations and quotes about mental health we found. Share yours in the comment section below!

Source  “If physical ailments were treated like mental illness” 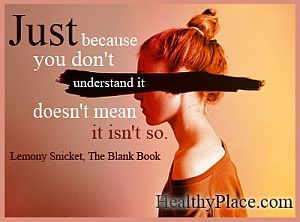 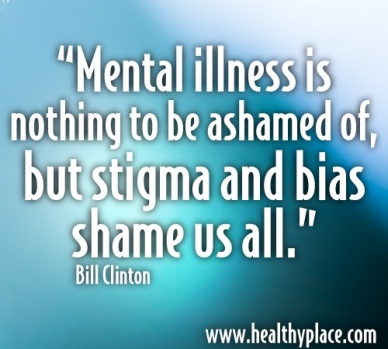 I was holding my own earlier.

Mid day from out of nowhere, a ninja mood swing attacked. Anger, hatred, hostility, hopelessness, resentment, depression, anxiety, suspicion, paranoia…It all hit me at once.

I have little doubt it was precipitated by my kid being an absolutely defiant chatterbox from hell. I keep trying to absolve her with “she’s being a kid” but honestly, if I had acted the way she does, my dad would have busted my butt with his belt. She is at her worst with me and I swear it’s ADHD. I don’t want her labeled or drugged but she’s often beyond my control and it’;s taking a toll on me. Usually it just raises my anxiety and irritation.

Today my mood just went from okay to gutter ball. Nothing bad happened, no true deviation. Just hours of “mommy mommy mommy” and her smiling as she did things she knew better than to do…My stress level skyrocketed. Still, I tried to play Candyland with her, took her outside, played a couple of our giggle games…And she was fine in short spurts.

I am in over my head here. I can’t manage my illness and manage a banshee as well. What gets me is how abrupt it was.To go from functional and low to shut down and in the abyss so quickly…It scared me. The bad thoughts emerged and I started thinking everything was going to go to shit, everyone was out to get me, nothing is good…

It’s maddening. It would drive you insane, if you know, you weren’t insane to begin with.

I was so dejected I fell into bed before 10pm. I woke at 11:30 and have been up since. Showered, made some tea, had some leftover supper. I have my kid’s parent teacher exit visit at 8:3o this morning. Then I have to take her to get her glasses adjusted again. Get a few groceries. Such is my exciting life of mundane and mood swings. Bex has had some “friends” commenting on her spending her summer here doing nothing but hanging out inside and it makes me feel shitty. I wish I could afford to do things. I wish I could handle the stimuli of the petri dish. I wish I could be anything but the clusterfuck that I am.

Oddly, the clusterfuck I am is just fine provided there’s no negative input from others expecting me to be what I’m not which I then transfer onto myself. Bex seems fine with things, as she says, this is pretty much what she’d be doing back home. I never liked her friends, anyway. They were there when she was doing good, and complete shallow assholes when she fell into the abyss. I’m going to go with the “they’re ass trash” mentality, if only to absolve myself for being a crappy hostess.

The mood is on the rise, at least. Hopefully another week or so and the Paxil adjustment will smooth out. Because if this up and down shit is here to stay, I’m gonna hazard a guess that the Lamictal is doing fuck all. It could be worse. I could be taking Remeron like Bex and living in a perpetual coma. Except I’ve been there and done that. A month of sleeping 14–16 hours asleep I told the dr no more. That’s not life and sleeping isn’t a cure for depression. That doctor who wouldn’t change my zoloft when I was getting worse instead of better found out…I will do without meds as opposed to taking something that makes me feel even worse. Maybe going off meds is a bad thing, but if you’re met with a doctor who dismisses your input in favor of his own delusions…

Sometimes you’ve got to say fuck it. I wish I’d done that with the lithium much, much sooner. I think it was making me worse but I was so desperate…That desperation may have cost me six months of my life and added another notch of misery to my memory.

This psych stuff is a pain in the ass. The need to overdose and sleep all the time or drink or cut…It’s understandable. Because you just hit a wall with the misery and nothing ever changing for long. The fact I am still managing without resorting to old bad habits is a good indicator that maybe I have finally gotten it through my head crutches are not cures. I remember the trazadone/seroquel days when I’d sleep 12, 14 hours a day and I was content to do so. Looking back, I wonder how I didn’t notice that I wasn’t actually living. I was existing in a cloud of sleep and brief lucid periods. Which is why I have a year’s worth of Trazadone stockpiles. I have zero desire to go back to that place. And with a kid, it’s not like  I have the option anyway.

I don’t like the remnants of the earlier mood shift that linger now. I am still paranoia, suspicious, convinced something bad is on the horizon. Yet nothing has indicated as such so it must be a byproduct of the crazy creeping back in. I wish crazy would go knock at someone else’s door for a awhile.

I need a vaycay from the cray-cray.

I really need to avoid my kid’s friends and their lingo.