Posted on February 17, 2014 by Oh Temp (BipolarUnemployedLost) | Leave a comment 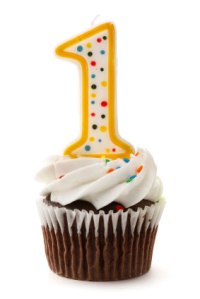 Happy ONE YEAR to Bipolar, Unemployed, and Lost!

I can’t believe I’ve made it this far with my mental illness. I have learned so much from my fellow bloggers about what I have, what others experience, and how this illness and others have touched so many lives around the world.

I really can’t believe I’ve made it this long.

To commemorate this, I want to paste my FIRST EVER BLOG ENTRY, just to show you how far I’ve come. Its so awesome to have so many bloggers that want to read this blog and connect with me.

To you, Thank you. Thank you for being there when no one else was. Thank you for connecting with me. Thank you for your advice. I hope that this next year, together, we can help our fellow soldiers come down off the ledge, and into our arms (isn’t that romantic…)

“This is uncomfortable. To blog about a my life.

Wait, let me not say that. I’ve actually held a blog for years on another site. I use to love to blog. Back then, it wasn’t called “blogging”, it was a journal. A journal where I wrote about stupid things, funny things, boys, drinking, dancing, about a life that seems so far away. A life I don’t remember living.

Now, I have been diagnosed with Bipolar, i’m fatter, engaged, and unemployed. I guess this time around I’m looking to reflect, and to understand how I got here. Most people would look at my life and want it. They would want the connection I feel with my fiance, my endless amount of electronics, my house, my friends…but for me, it’s nothing. Have I always been this way. Not seeing what good is around me?

The question I want to ask is why? Why am I not happy with what I have? What I have achieved..

I guess this first entry is to remind myself where I am starting, and how low I feel. I want to connect with people just like me. I want to help people who aren’t happy.

Here’s to another journal. Here’s to a new beginning and a fresh start”

Like many hardworking, tax paying individuals, I gladly paid into the Social Security system, but never expected that I’d have to use it for disability. Since both my doctors will

The post Social Security and my Huge Pay increase appeared first on Depression and Bipolar Disorder:.

Here is the Valentine’s card my husband gave me. 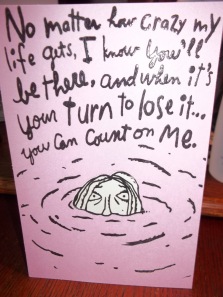 And here’s what it said inside. 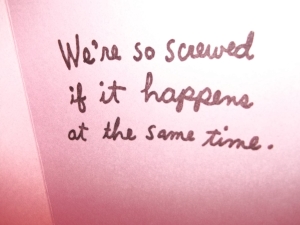 (He doesn’t have bipolar disorder (any type), but has had a couple of depressive episodes, enough to know what the experience is like. Even took Prozac for a while.)

Once Upon a Time: Chapter1

The past week has found me busy with work, getting some exercise (Shamrock Shuffle is coming up soon!) and taking care of myself. I’m really amazed at the progress I have made simply by following a routine. Of course routines get boring and you start to feel like you’re living a half life, but when you have bipolar disorder, routine is your friend. My friends and family have noticed I seem a lot more stable and even on my new medicines and I know my new job, with it’s set schedule, is a huge factor into that. I get enough sleep most nights, eat and take my medicines at the same time and overall have some type of stability. This is a huge improvement over my rapid cycling. Not to say I’m out of the woods, but I’m definitely taking time to enjoy feeling quite good right now.

One thing I still have trouble with is pain left over from my break up with my ex fiancee. Time and distance and individual growth have all helped me to see we were always doomed. But logic never removes emotion from memories. I was feeling especially sad about it recently and decided I needed to stop beating myself up, to stop replaying the memories and to just breathe. I decided to be kind to myself and I’m happy to say I had a wonderful day as a result. I got a lot done around the house, but still managed to relax. I did a little decorating, a little cleaning and a lot of acknowledging just how far I’ve come. I’m not curing cancer or finding an alternative to fossil fuels, but I’m living my little life pretty well right now. When you’re in the throes of bipolar (or any mental illness) daily life is a sometimes insurmountable struggle. My depressive state would find me unable to take care of the house, myself or be effective at work.  But in the last few weeks I’ve been able to stabilize my finances, make progress on certifications necessary for my job, start running again and spend time with my family. These are all things I’ve previously never been able to do simultaneously in my entire life. So yeah, pretty big deal to me. 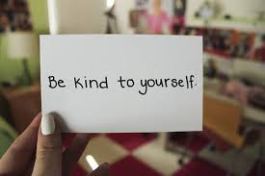 When The Light Bulb Comes On

It just occurred to me this morning that I’ve never really talked about therapy in this blog.

Unlike most patients in the mental health system, I’m fortunate enough to have a doctor who does therapy as well as medication management…..one-stop shopping, as it were. Maybe I’m just spoiled, but I would feel awkward sharing my innermost secrets with anyone else. It’s bad enough when I have to tell him what fresh hell my brain has cooked up—I’d seriously hate to have to tell the same sad stories twice.

I don’t remember exactly when we started all this; in fact, there really never was a formal declaration of “Hey, we’re going to do therapy now”. I believe it was somewhere between the first and fourth visits, when it became clear that this would be a long-term relationship rather than just a couple of consultation appointments. At any rate, we had one thirty-minute visit a few weeks into treatment—I think it was the one during which he became 110% convinced I was bipolar—and when we got done, he announced to the front-office staff that we would ALWAYS have full 50-minute appointments from that day forward.

I have no idea what “brand” of treatment we’re doing, but it seems to be a hybrid of cognitive-behavioral and social rhythm therapies. The former assists the patient to replace maladaptive thought patterns with more positive ones, while the latter integrates the teaching of interpersonal skills with the establishment of healthy routines (hence my “curfew”).

So, given the fact that I’m still battling mood swings, what have two years of therapy accomplished? A LOT. For one thing, I no longer believe I’m a POS who doesn’t deserve to be happy. For another, I’ve come to understand that not every negative outcome is due to a personal failure. And I’ve learned that no matter how much I may wish otherwise, I am dealing with a chronic lifelong illness that will recur, even if I do absolutely everything right….and I need to let myself off the hook for it.

As a result, I’m finding that I’m able to talk things out more of the time now, instead of ACTING them out like I did before I was diagnosed. I used to go through life with my head down and my fists up; now fighting all the time seems like a colossal waste of energy. I’m not an angry person anymore; yes, I can get angry, even crazy-angry, but I don’t have screaming fits anymore (although that can probably be at least partially attributable to medication) or go for 90 MPH car rides.

I don’t even engage in political debates like I used to; when I do, it’s a reliable sign that my choo-choo is about to jump the tracks. So when I catch myself getting hot under the collar over Obamacare or some other sensitive subject, I know it’s time to step away from the keyboard and do a gut check.

I’ll be the first to admit that the process slips badly once in a while, particularly when I’m irritable or manic and my filters go missing. There are a number of people (family members for the most part) who can and would truthfully attest that there are still times when I act like a crazy woman. But overall, two years of therapy and medications have made me a much more pleasant person who doesn’t always have to start—or finish—an argument.

Yes, boys and girls, therapy can be a very good thing indeed……especially when the light bulb over your head comes on and you finally “get” a concept that’s eluded you all your life. Finding out last week that my frequent relapses are not a result of something I’m doing wrong was a HUGE breakthrough for me. And since I’ll likely be in some form of treatment for the rest of my days, I think it’s safe to say that I can look forward to many more discoveries.