How We Can Improve Hospitalizations 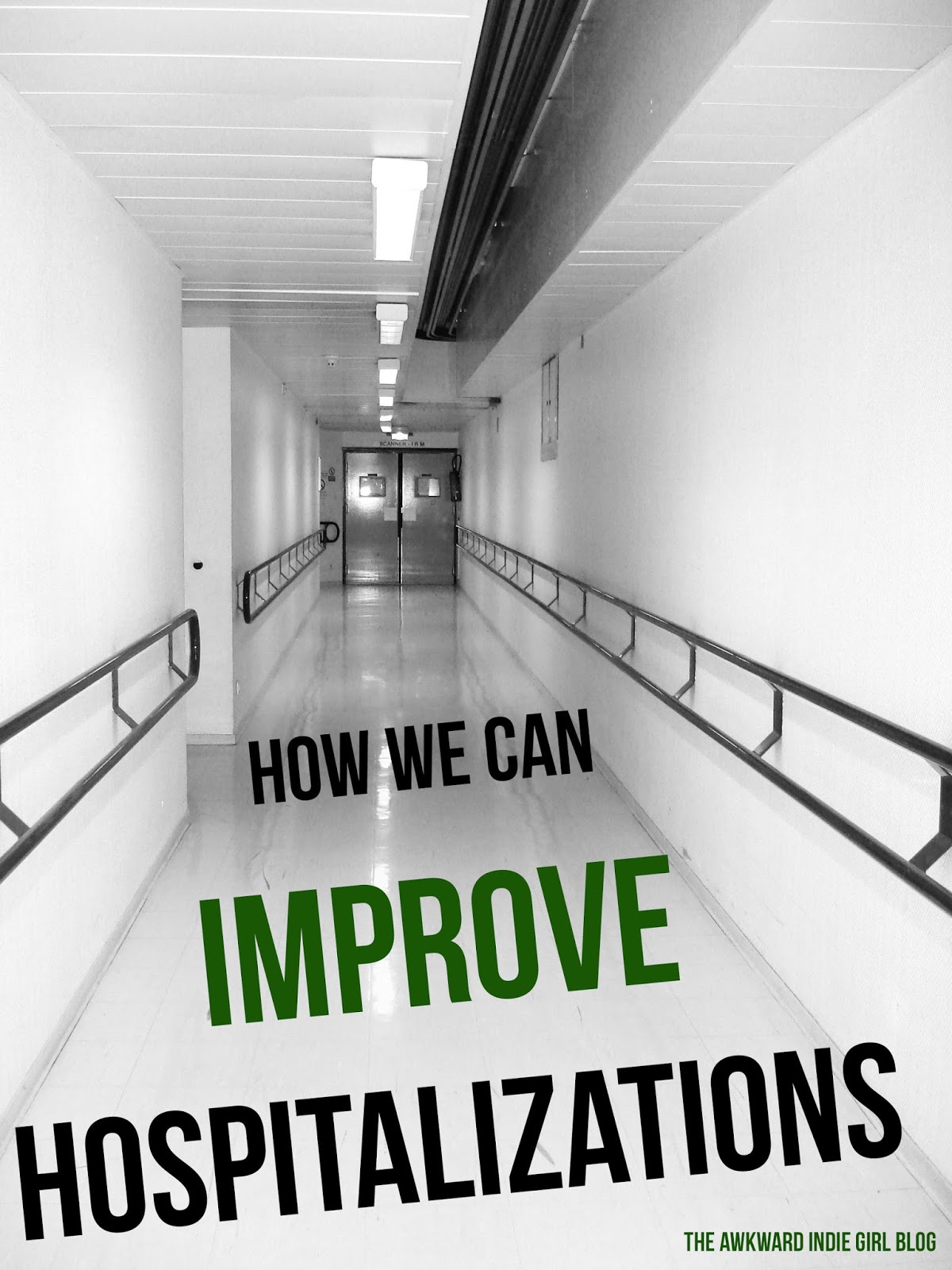 I’ve been hospitalized twice. I’m not an expert, but I’ve been in inpatient care two more times than most politicians and healthcare providers. My experiences have given me insight as to how we might improve the stays of patients. Here are five of my suggestions:
Exercise. At both hospitals I’ve been to, there has been nowhere for us to exercise. I’ve gotten in trouble for pacing the hallways as I tried to keep myself active. It is scientifically proven that exercise has a positive effect on mental health. Why aren’t we providing patients with a space to work up a bit of a sweat?
More materials. Outdated ratty magazines, half-filled-in crossword puzzles, dried out markers. There was nothing stimulating in either psych ward. We were told to either watch TV, draw, or sit quietly. Most people went back to their rooms to sleep. There were hours where we were supposed to occupy ourselves with nothing.
Weekend releases. During my first hospital stay, I was not quite ready to go home on a Friday. But because the doctor doesn’t come in on weekends, I had to wait until Monday for discharge. This cost my family, my insurance, and the hospital more money. Patients should only stay in the hospital as long as necessary. That weekend was long and painful. All I could think about was going home for Christmas.
Personal therapy. I expected that while I was in the hospital I would get the opportunity to talk with a therapist. I did – for ten minutes on my first day. Group is valuable, but it’s impossible to get individual help when everyone is competing for attention. This is a tricky issue, but I think that some sort of compromise can be reached.
Easier billing. My mom is still being billed for my hospitalization in September. I understand that the process of billing and insurance is complicated, but this is ridiculous.
Some of my requests are lofty, and I know it. There is a lot wrong with American healthcare in general. Problems like billing are pervasive; solutions won’t be found overnight. As an insider, these were things I noticed that I would like to see changed.
When I described my ideal hospitalization, my fellow NAMI panelist suggested I try a spa. It seems unfortunate that celebrities get to heal at beautiful, relaxing rehab facilities while I shuffle around in recycled socks. Like most things, I suppose it all comes down to money.
What are your thoughts? How would you improve inpatient hospitalization?

photo credit: via photopin edited by The Awkward Indie Girl

To Sleep, Perchance To Have Cats Fight Over You All Night

And no, that’s not a song title by a punk-rock band, it’s how I spent last night.

It’s been a long time since I’ve had such a lousy night’s sleep…..if you can call it that. I don’t know what got into those little heathens, but they must’ve woken me up half-a-dozen times with their growling and hissing. For some reason, all three also decided that it was a jolly time to use Will and me as launch pads AND landing strips for their airborne adventures, which continued on and off all night long.

At one point—somewhere between midnight and zero-dark-thirty—I found myself in the middle of a standoff between thirteen-year-old Rosie and the boy, Mickey, who’s about fifteen pounds’ worth of red-and-white cat. Rose was ensconced upon my chest, which she apparently felt the need to defend, while Mick was perched on my legs and swatting at her with claws bared. She was making that deep-throated rumbling sound she does only when she’s getting ready to smack somebody into the middle of next week, which made me extremely nervous because I knew that war was imminent, and I’d be the one to get ripped to shreds.

So I did what any grumpy, sleepy, pissed-off cat owner does when her fur-kids are having a disagreement, and with a great heave of the blankets tossed them both off the bed. I am normally tender-hearted to a fault when it comes to the pets, but I couldn’t help feeling a grim satisfaction as they both caught air and sailed into the darkness. I heard them land softly on the floor, where they carried on as if nothing had happened.

Exasperated, I told them to shut the F up and let me sleep, which woke up Will and made him yell “KNOCK IT OFF!!” the way he always used to whenever the (human) kids annoyed him. This did nothing to stop the growling and spitting, however, so I fumbled around in the dark for the spray bottle we keep at bedside for this purpose, and let ‘em have a couple of squirts.

That gave me enough of a break from the festivities to slip back into dreamland, but alas, it was short-lived. By this time, the cat who’s usually the neutral one had gotten into the fray, and she leaped onto the back of Will’s neck with her full weight as the other two continued to circle around each other at the foot of the bed. Now we were BOTH wide awake and yelling at the cats, and my hopes for a decent second half of the night were dashed as I realized I was putting in way too much energy to be able to relax even if they wound up calling a truce, which they finally did sometime after three or four in the morning.

So with a grand total of maybe four or four-and-a-half hours’ sleep, I’ve been “off” all day—a little too quick to laugh a little too loudly, a little too easily distracted, and a lot fidgety. And I realize again just how critical rest and sleep really are for me, because apparently I can’t afford even a single night of poor-quality shut-eye. I know these signs all too well and I take them seriously now, even though they won’t last because tonight I’m going to sleep upstairs with the dog, who does nothing except snuggle between my knees and gnaw on her chew-bone.  THAT’LL teach those cats to mess up my sleep. So there.

(This will make less sense if part one was not read.)

Brief respite today when my little friends,aka The Bad Thoughts, went away. Nothing good ever lasts. It’s back. Telling me the chick at the cable company was rude to me when I paid the bill whereas earlier I was willing to blame myself for misconstruing.

Telling me the nurse at the shrink office was wayyy out of line to so snottily declare “You shouldn’t have waited until you ran out of lithium to call about a refill.” Telling me I was bitchy when I told her I HAD tried to take care of it three weeks ago by letting the nurse know I needed refills.

Telling me that my stepmonster did not do me a favor by replacing my wiper blades so I could pay my power bill. NO, she did it nefariously to hold it over my head and ultimately prove I am a lousy mom who can’t provide for her kid.

These “friends”, these BAD nTHOUGHTS, are on my last fucking nerve and making me think I am gonna have to broach the topic of anti psychotics with the shrink. But I took them in the past and they did fuck all but make me sleep. The “friends” went nowhere. Ass trash.

I know without doubt my salvation will be the end of winter. Once it starts to warm up and stay light longer, the depression will retreat for two seasons. It’s seasonal depression,duh. And it’s soo not a selective thing where I decided I wanna be depressed cos I don’t like winter. Truth is, I don’t care a whole lot for summer and all its sweaty heat and endless hours of bright ass sunshine. I don’t like all the people out and about making me anxious and panicky and paranoid. That’s always been the litmus test for me in determining whether I’m playing some head game with myself.

I’m not. I despise most of summer and yet…The mood lifts, often becomes manic, functionality skyrockets. Over and over, year after year, my entire life. Not that the shrinks have ever given it a second thought other than to suggest spending money on expensive ridiculous daylight simulating lamps. Lack of light isn’t the problem,it’s the damned cold, it does something to me.

Makes me wonder how much of my life has been lost cos of crap doctors and depression that might not even exist if I didn’t live in an area with such drastic seasonal changes. I’d love to move elsewhere but damn it, that winning lottery ticket eludes me.

But in a day of mental hell and tantrum provoking hassles…I will say one good thing.

I had a good day with my kid, she was very affectionate and happy that I am her mom. Which should be the norm but really isn’t so when it does happen..I appreciate it all the more. Maybe she doesn’t hate me, maybe I’m not screwing her up, maybe it’s all worthwhile and my “friends” telling me otherwise is just so much ass trash.

These friends, the thoughts, can go away. I’m a loner and they’re not paying rent in my head so…hasta la vista.

I’m having trouble really expressing my thoughts today but I’m still going to post. For the last few weeks I’ve definitely been in a depressive state more so than hypomanic. I’m caught in this weird mix of self respect and self loathing. Not sure how the two are happening at once, but they are. I go from feeling really proud of what I’m accomplishing at work to feeling down and lonely. I know most of this has to do with me adjusting to my new antidepressant. It hasn’t been long enough for the medication to be at it’s peak so I am still sad most of the time. But I do still get those flashes of “aww yeah I rock” here and there, which is good. My concentration is poor, hence this meandering post. Depression for me is marked by withdrawing and isolating and appetite changes. I’ve been subsisting mostly on coffee and sporadic meals. I have a lot of trouble getting up in the morning, no matter how much sleep I get and once I get to work I’m irritable and want to leave. I still somehow manage to get a lot of high quality work done and interact  politely with others, but it’s just so exhausting. I’ve said before that bipolar is exhausting, but it really is, there is just no other term to describe it.

I’ve heard people say that taking medication for bipolar kills your creativity. I am finding my creativity is there but my mind is so unfocused I can’t concentrate long enough to act upon my ideas. So the crafts and DIYs sit untouched a bit longer. I hang on in my little life raft and wait until I can see clear skies again.