There are days when cooking nutritious foods seems impossible. Between my food allergy, migraines and bipolar, the thought of doing anything more than microwaving a hot dog is overwhelming. But I do my best to cook my own food when I can and I get a lot of satisfaction out of making something new that tastes good. I’ve been feeling queasy the last few days, not real sure why and I really wanted soup to help my stomach. Sure I could have opened a can of Campbells’, nothing wrong with that, but I really wanted to make soup from scratch, like my grandmother does.

I should preface this section by saying I’m a lousy cook. I can make a few good meals, and that’s it. I’m also not a nutritionist so sometimes the things I eat are less than healthy (see above referenced hot dog). My grandmother worked for 40 years as a sous chef, and sadly I did not inherit her skills. But I am adventurous, so I decided to give making my own soup a shot. Here’s the ingredient list of what I used:

I started by pouring stock into a large pot and added in the chicken, bay leaf, parsley, bouillon cubes and pepper. I cooked the noodles separately in their own pot. I let the soup simmer covered for about 30 minutes and then added in the noodles. I let the soup with noodles simmer for about another 10 min. To make up for condensation during cooking, I added in another cup of water.You can add in more salt or pepper to taste, but keep in mind between the stock and the bouillon cubes, you already have a hefty amount of sodium. Also note that I did not use carrots, celery or onions, which of course you can do. I just don’t care for cooked carrots or celery and I was out of onions. You also don’t have to use nearly as much chicken or noodles, but I prefer a heartier soup so it is more of a meal. I imagine adding some gluten free flour would thicken the soup a touch more.

One other important note: as I said before, I am not a nutritionist. I assume if you follow any kind of gluten-free, vegan, paleo diet, you already read labels. Just because something states it’s gluten-free doesn’t mean it’s calorie, fat, sodium or bad stuff-free. I was really happy the soup tasted quite good. The spinach egg noodles are a little squishy for my liking, so maybe I won’t cook them separately before adding to the broth. But it did sure boost my confidence knowing I’d made something good by winging it.

Do you have any recipes you created by winging it/being creative? If so, share them with us!!

Reality is biting me

I am smothering again. Stress, problems, dealing with people (including my own kid) struggling with moods and anxiety and depression…

I have a hair trigger temper these days, which is at odds with how numb I feel. And it’s not a good numb, it’s that “end of the line” numb where you have just had all you can stand of reality and the minutae that comprise life.

Today it’s a desktop computer that keeps crashing. Yet no virus or malware is turning up and if it does i will be shocked considering the wifi card won’t even allow it to access the net 90% of the time.

I need to get a lithium level done tomorrow. I hate going to the hospital to use the lab. Hate it.

My kid won’t stop talking, she absolutely refuses to entertain herself, she has to be glued to me at all times. UNLESS her rude little friends come around then I don’t exist.

The friends have me ready to drink bleach. All summer they would stay for hours. Now they knock on the door, play with her for five minutes then go play with other kids and leave her hanging. It doesn’t stop them from demanding food then leaving or getting a snack then leaving. They do this multiple times a day and it is making me insane. I have started putting the kibosh on play times, but they still come back to the door over and over in spite of being told not to. I hate those kids with a burning passion and it makes me feel shitty to say it but it is what it is. I have tried so hard to be patient and tolerant but at some point you get enough shoe prints on your back you retire as welcome mat.

I keep wondering though what happened. I dealt all summer with more grace than this. But I was manic from the Cymbalta and the mindset difference is astounding. It’s like I spent the entire summer happy drunk and am just now sobering up and seeing things for what they are.

Cripes, I didn’t take my lithium with food and now I have nausea from hell,  Morning sickness nausea has nothing on this shit. Time to go find a cracker or something.

I think I am losing my mind. Honestly. Cracking under the pressure. And it pisses me off. I have done everything I am supposed to do, tried so hard…and still the mental illness wins and reality bites me on the ass.

I no longer enjoy life, at all. I spend more time dreaming of the day when my number is up. That;s sad.

But at least I’m too depressed to do anything about it.

Maybe the new shrink next month will have some ideas. I won’t hold my breath though.

Allo lovely folk out there!

My knitting has suffered this week; I’ve done pretty much nothing. I’ve got some booties on the go as a filler project; I’m slowly trying to learn how to knit in the round, and that’s making me not want to pick up my needles. But I did finish my hat, so obviously, I’ve got to share the pictorial evidence of this.

Past that, I’m still dragging and blah… but I’ll tell you guys more about that later this week. For now, back to drooling on the desk!

The post Snuggly! appeared first on The Scarlet B.

Posted on October 28, 2013 by Jenna Kahn | Leave a comment
For maximum effect, please read this post while listening to Coldplay’s “The Scientist.” 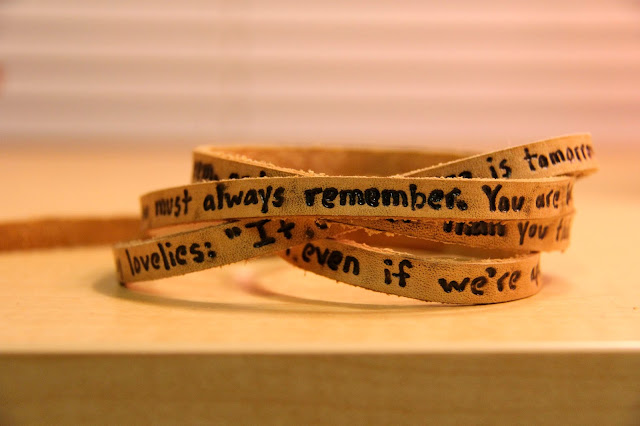 “To my lovelies:
If ever there is tomorrow when we’re not together…
there is something you must always remember.
You are braver than you believe,
stronger than you seem,
and smarter than you think.
But the most important thing is even if we’re apart…
I’ll always be with you.”
My Nanna, my mom and I all having these matching bracelets. On the surface, they express some pleasant thoughts, but as with most Winnie the Pooh quotes, they reveal profound truths in their simplicity.
While curled up in bed evening, I looked over at my bedside table and saw this bracelet. It would be easy to dismiss its words. I don’t feel particularly brave, strong, or smart right now. I feel awful. But maybe that is the bipolar talking. Maybe I need to readjust my perspective and think about the mental illness context of these words.
For me, bravery is not fighting a lion or starting a revolution. Bravery is fighting to end my cycle of codependency, trying to make new friends, and going to class even when I feel like hiding in my bed.
For me, strength is not running a marathon or lifting great weights. Strength is taking my medicine even when it makes me feel a little sick, getting rid of items I used to hurt myself, and writing instead of cutting.
For me, intelligence is not acing every test or always having the right answer. Intelligence is communicating my strengths and weaknesses with others, sharing my feelings, and adjusting my study schedule to accommodate my mood swings.
I am braver than I believe, stronger than I seem, and smarter than I think.
You are, too.

Part of me feels isolated and depressed

Something is not right with me today. I feel very sad and alone and as if no one cares or sees it. I don’t care about what tomorrow is going to be like because today is a huge black cloud. But I am not selfish. I am not going to put my depression on those around me. I won’t let it ruin my man’s day but I am so hurt. I don’t get why. I feel so hopeless and like hiding. I’ll probably go to my parents tomorrow and just leave my phone on silent. This too shall pass….or whatever.