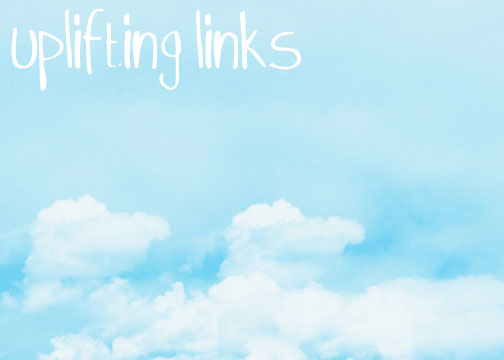 Today, I cried. I’m frustrated about my major, sick of not being thin, and a little homesick. I needed to make an Uplifting Links post to try to remove the “suck” from my life. Prepare to insert happy, people!
Watch a porcupine that acts like a puppy (via Aunt Donna)
Stunning Disney portraits by Annie Leibovitz
The cutest t-shirts – check out “Waiting for the Bus”
A father’s post about raising a gender-creative child
The truth about babies (I met the husband-wife duo behind this book on Saturday)
Look at the world a new way (via Erica)
Creative family photography – feet first!
Garden-inspired typography
Happy habits (via Jeff)


It’s okay to have a bad day, and it’s perfectly acceptable to boost yourself up with the help of the Internet. The Internet is nothing but a massive collection of resources – resources that can be accessed for all occasions. The goal of Uplifting Links is to do some of the searching so that you don’t have to. It’s my way of sending a virtual, biweekly hug to you.

Enjoy, and feel free to send your contributions to [email protected]

“I’ve got a bad case of the 3:00 am guilts – you know, when you lie in bed awake and replay all those things you didn’t do right? Because, as we all know, nothing solves insomnia like a nice warm glass of regret, depression and self-loathing.”

One thing I’ve noticed in this sleep adjustment phase is how vividly I’m remembering dreams… and the contents as well. You see, I’ve never been one of those folks to have sexy dreams; my brain has been rather vanilla. But lately, I find nooks increasingly sneaking in one way or the other, which is… I’m not really sure what to make of it. Does it tie to having a semblance of a sex drive again, or is it just happenstance? Really, as long as they continue to drift away from such dreams being tied to folks like my (step)dad, Leonard Nimoy’s Spock, or old bosses, I’ll probably take it all in good stead.

I’m still still very slowly adjusting to the new schedule, but that’s to be expected. It reputedly takes a body eight weeks to adjust to a new schedule, a point I tried to argue without any success with higher ups when I worked shift in the Air Force — the schedule changed every eight weeks; I was told to be grateful it was that long a stretch *rolls eyes*.

But I guess it boils down to me being concerned about my functionality and mood stability. I’m still holding up quite well, but I’m wary that the shift and me not being quite in sorts means that depression might be able to sneak in the back door and trick me when I’m feeling fuzzy. But I guess that’s the same as ever — it’s all a balancing act, and I’m still not that great at juggling. Or balancing. Or walking in a straight line. Or waiting patiently. I manage to muck through though, so that’s acceptable.

I think that’s about it for now. I’m in a room that’s that perfect temperature for making a person immediately fall to sleep, so my fuzzles aren’t shifting that quickly. It’s pleasant, but not ideal for trying to make brain things happen. I hope everyone out there is doing well.

Tom the Fiddler and I noodled around playing fiddle-and-banjo tunes in his shack overhanging the North Toe.  We each had one eye out the window, watching for Andy the Guitarist’s old brown Ford pickup.  This was odd.  Andy was never late for rehearsal.  Music was his numero dos passion.  His numero uno passion was raising his two fearsomely intelligent, accomplished, and assertive daughters, in partnership with his fearsomely intelligent, accomplished, and assertive wife.

Finally the dear old truck rolled into the yard.  Tom and I put our instruments down and walked out to greet Andy, who was moving uncharacteristically slowly.

He had his back to us, as he got his guitar out of the vehicle.  Then he turned around.

His nose, generally a bit on the petite side, was first of all smooshed all over his face.  You really couldn’t tell where it began or where it ended, it was squashed so flat.  Then there were the two black eyes and the split lip.   Regardless of all this, he was grinning like a possum.

“Andy!  What the hell happened to your face!?”  Tom and I shouted in unison.

Olivia is his younger daughter.  She is a fast-pitch softball star.  She goes to fast-pitch camp every year.  At age 11, she was feared by every team in the region.

“The catcher was sick today, so I stood in.  Or rather, my nose stood out.  She lobbed one over and I was sure the batter was going to hit it, but she struck, and I didn’t have my mitt up, and, well….as you see….”  We stood around him nodding gravely.  We saw.  ”Sorry I’m late,” he added, heading to the shack with his axe in hand.

“That’s OK.  I’m amazed they let you out of the emergency room so fast, though.  Was the ENT already there?” said practical Dr. Laura.

“Hell no, I haven’t been to the ER.  I can’t be late for practice.  I’ll let my wife the nurse practitioner deal with it when I get home.  The reason I’m late is that the ball knocked me out cold and it took awhile for me to come around, what with cold water on the face and ice bags, all that stuff.  I finally got right enough to drive, and high-tailed it over here.  Good thing I didn’t get a ticket to boot.  I have never been known to miss a rehearsal.”

Tom and I looked at each other and shrugged, and we headed into the shack and rehearsed same as usual.  We had a gig coming up, so we had to be on top of our game.  After we finished up, and Andy was putting his guitar back in its case, something struck me like a fast-ball.

Olivia!  How must she be feeling, having knocked her dad out and smashed his face into mush???

“Andy,” I asked anxiously, “What about Olivia?  She must be awfully shook up about this.”

Andy shrugged.  ”Yeah, she was.  She does feel mighty bad about it.  She was crying when I came around after being knocked out, but you know what?  As soon as I could stand up I gave her a big hug, put my arm around her and said, “That’s the ticket, kiddo.  You throw like a girl!”