33 days ago, I woke up in a hostel in Irun in The Basque Country – the first time I’d slept in a dormitory since I was about 12 – walked out onto the street and found the first of innumerable little yellow arrows that were to guide me for 500 miles across the Coast of Northern Spain, through Cantabria and Asturias, and back inland through Galicia over the last four and a half weeks.

And the day before yesterday, I finally saw the first sign for Santiago that wasn’t spray-painted on a makeshift sign in a field, engraved in wood and tacked to a tree, or randomly daubed on a wall in the middle of nowhere when there were still about 300 miles to go. 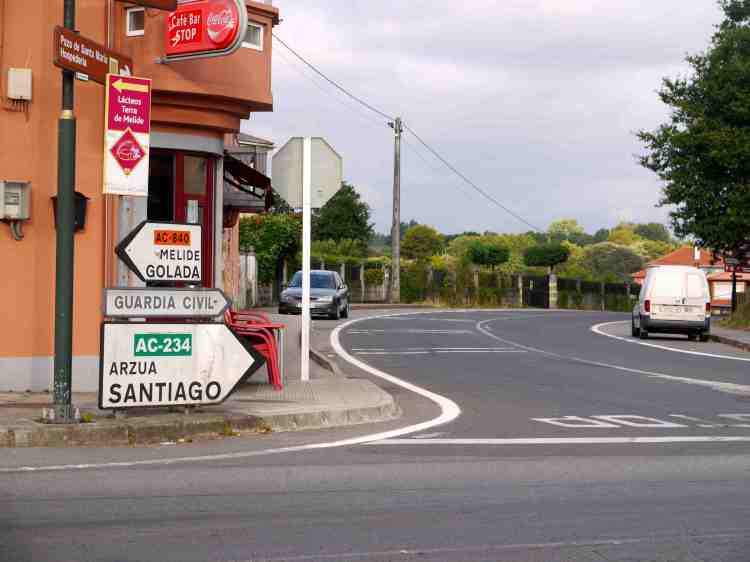 That day’s walk from Sobrado dos Monxes to Salcedo covers around 30km, but the final 100km or so of the journey has felt almost as if it has been designed specifically to let you down gently from the rigours of what has gone before, with a seemingly endless succession of flat woodland paths, shaded by overhanging trees… 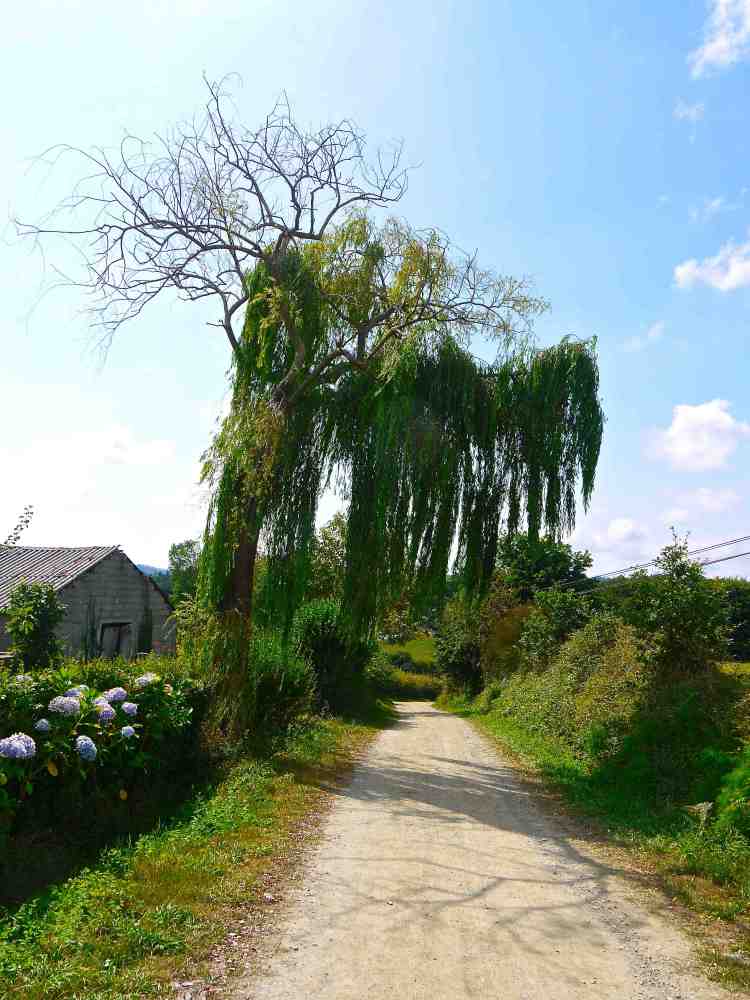 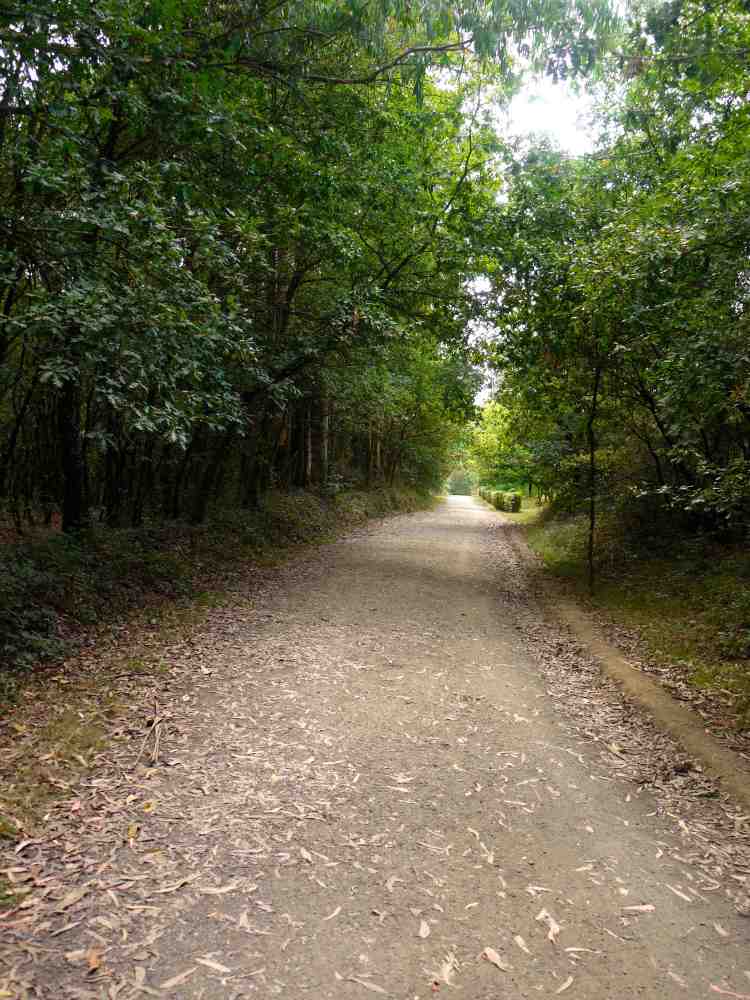 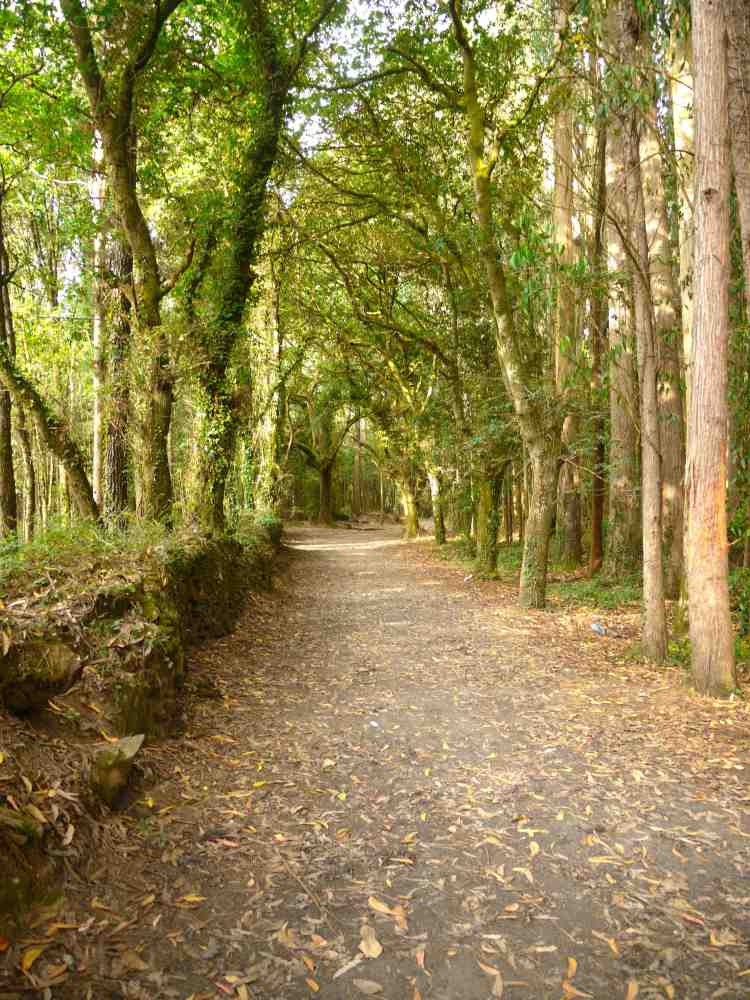 …so much so, in fact, that even after the typically light Spanish lunch that I stopped for in Arzua… 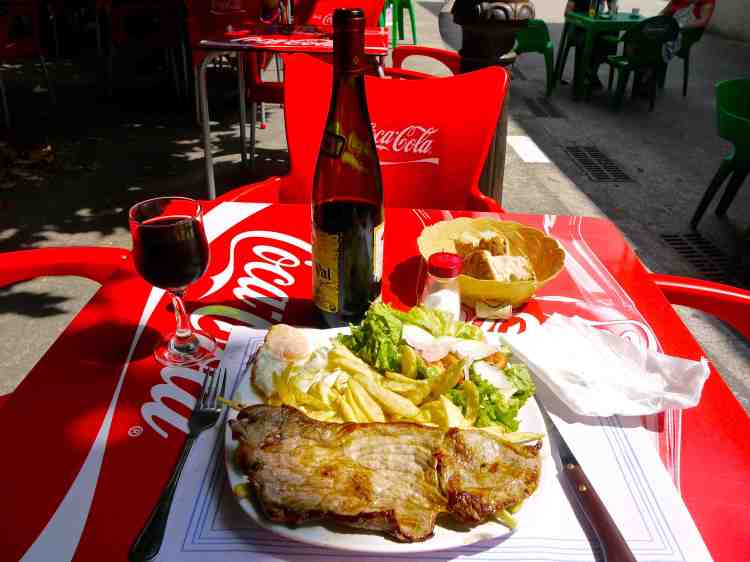 …I felt as if I could have happily carried on walking when I reached Salcedo (maybe it was just those Crocs ‘n’ Socks).

As I mentioned in the last post, I decided to stop just short of Santiago the next day, with the aim of being able to walk the last 2km or so into my final destination at daybreak.

And during this penultimate 25km stretch, there’s a very clear sense of other walkers also reaching the end of their journeys, with an increasing concentration of graffiti on buildings, trees and waymarkers as Santiago draws closer, offering messages of encouragement, reflections on the experience and lots of jokes about sore feet.

But strangely, I thought, there didn’t seem to be a significant increase in the numbers of people walking; I had heard that on the Camino Frances it was not unusual for at least a couple of hundred people to be walking the route on any given day, and once the Camino del Norte joined the Camino Frances, I had assumed it would be mayhem.

Yet the only noticeable difference was the lack of familiar faces. One of the pleasures of the last few weeks has been that whenever I’ve bumped into someone along the way, it’s usually been someone that I have met at some stage previously who has made exactly the same journey, making it easy to chat about the places we’ve visited and the experiences we’ve had.

The final stretch felt much more impersonal, as peregrinos’ experiences become increasingly eclectic, ranging from one guy I met who had cycled 3000 kilometres from Germany, through to the many who only walk the final 100km that are required to receive their Compestela – the official document recognising that they have walked The Santiago Way.

And on arriving a Monte de Gozo, the most popular final staging post before Santiago, the atmosphere felt strangely muted, despite its huge sleeping capacity.

The 1,500 beds available may not have all been filled but the receptionist said they weren’t too far off, and yet there was barely a soul to be seen outside the Albergue’s characterless sleeping blocks. 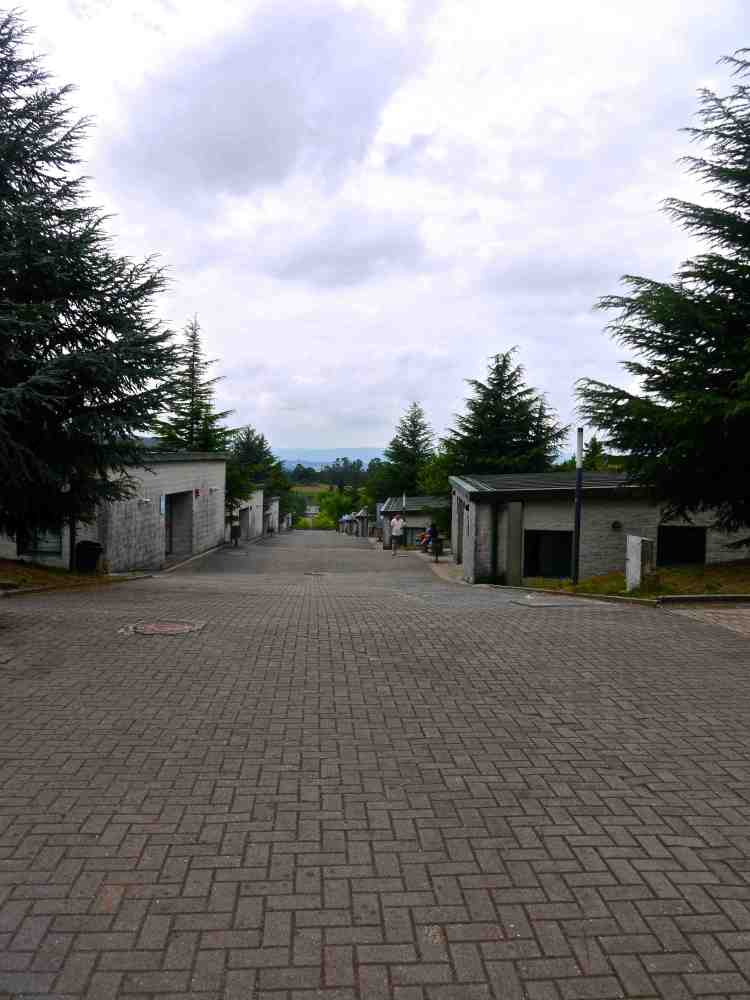 It’s almost as if everyone, regardless of where they’ve come from or how far they’ve come, is reserving their energy for the final few kilometres of their journeys in the morning.

And Santiago feels tantalisingly close from the brow of the mountain on which Monte de Gozo sits. 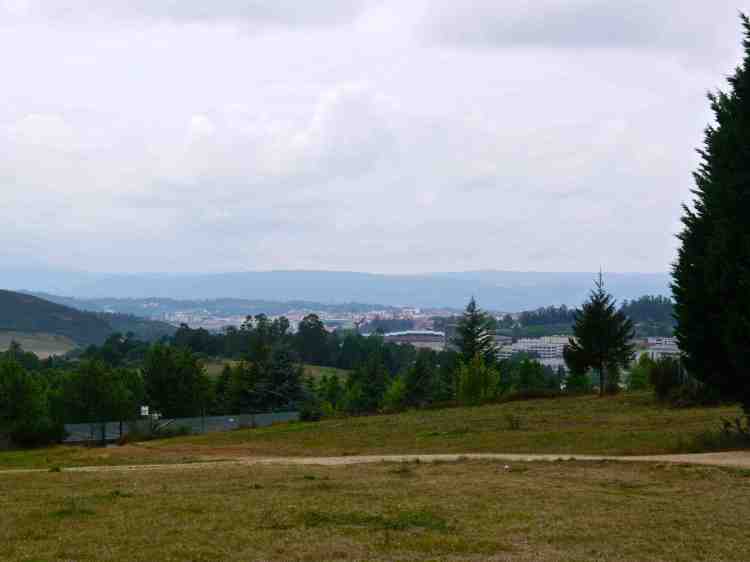 I had hoped to be able to post romantic shots of Santiago at sunrise, but unfortunately it decided to pour with rain.

But even that couldn’t quite take the pleasure out of officially entering the city outskirts. 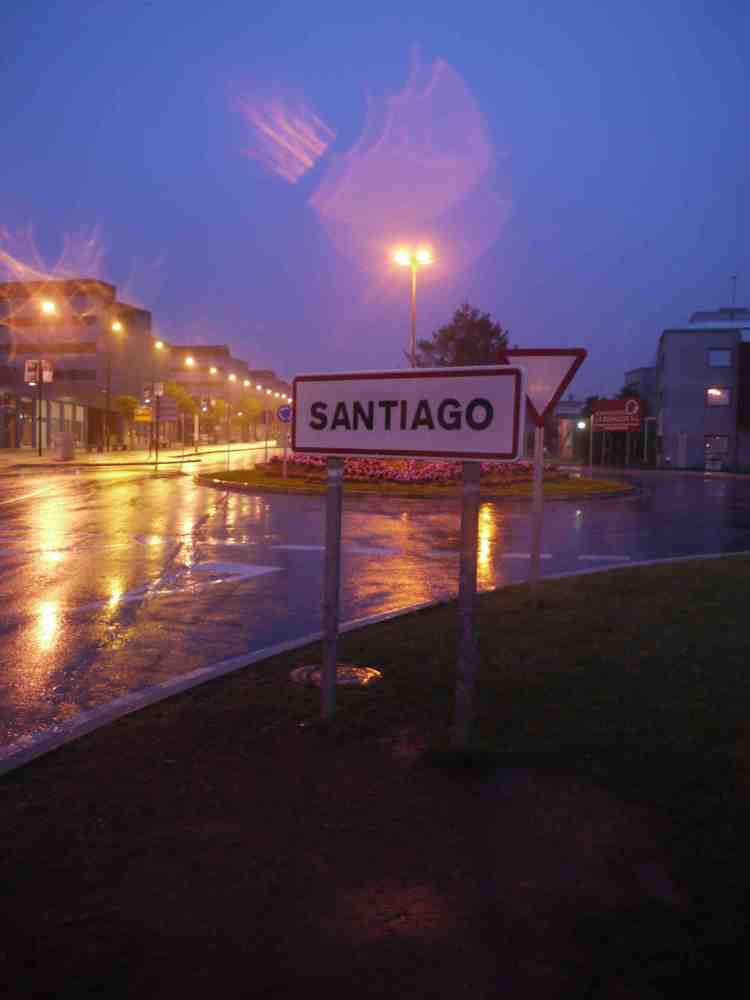 However, I hadn’t realised that the final 2km I thought I would be walking only took me to the edge of the city and that there were a further 3km to walk before reaching the Santiago cathedral and my journey’s end.

So by the time I was getting close, daylight was well up and I got my first glimpse of the cathedral spires at around 8.30am. 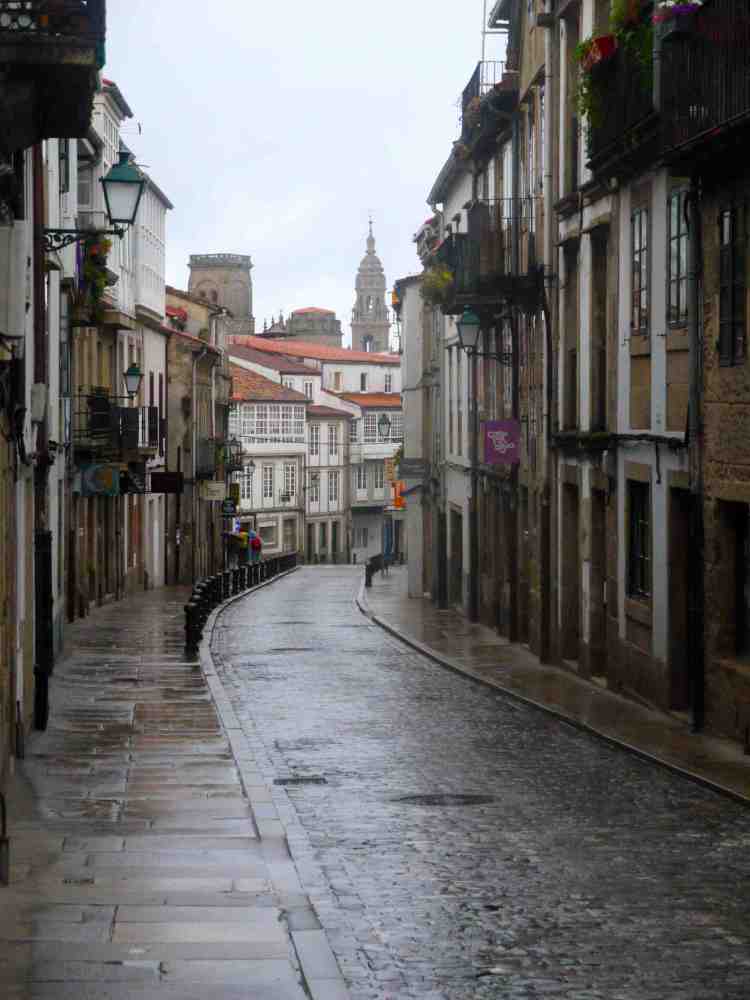 Up close, I found it impossible to even give the vaguest idea of its scale and grandeur.

This shot might give you some idea of its size… 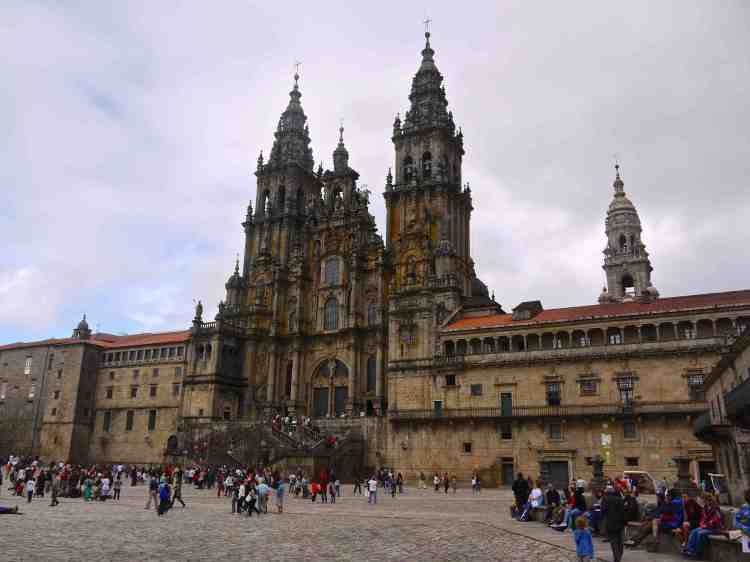 …although no idea of its circumference, as it takes at least a couple of minutes’ walk to view it from another perspective… 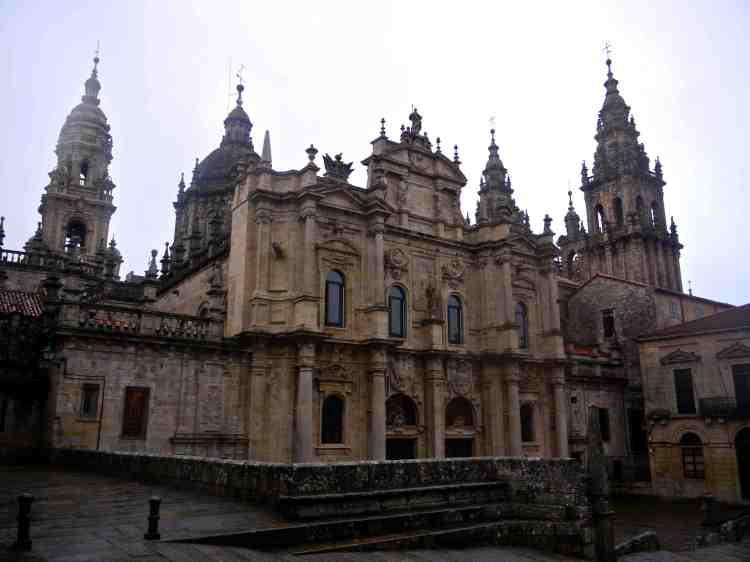 …and I’m afraid this is the best I could do as an attempt to give you at least some idea of the intricacy of its architecture. 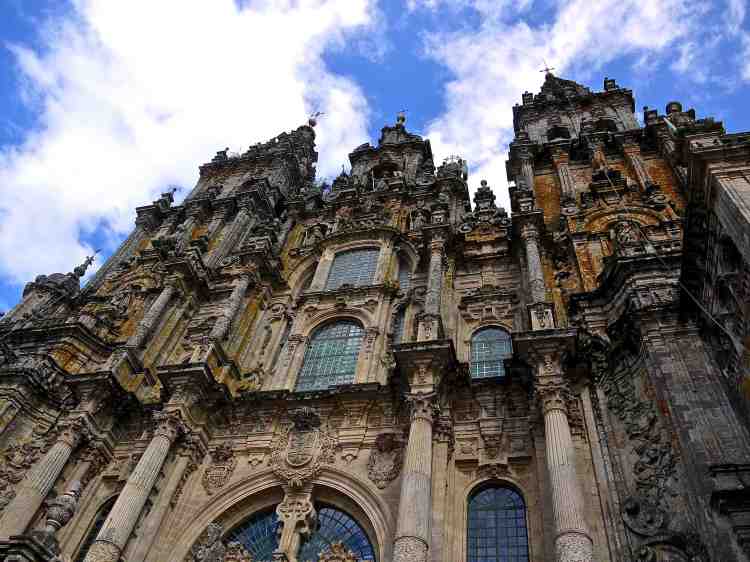 But what I can show you is something of the atmosphere in the huge square that faces the cathedral as it fills up with peregrinos and bicigrinos (those that have travelled The Way on bicycles) as the morning progresses. 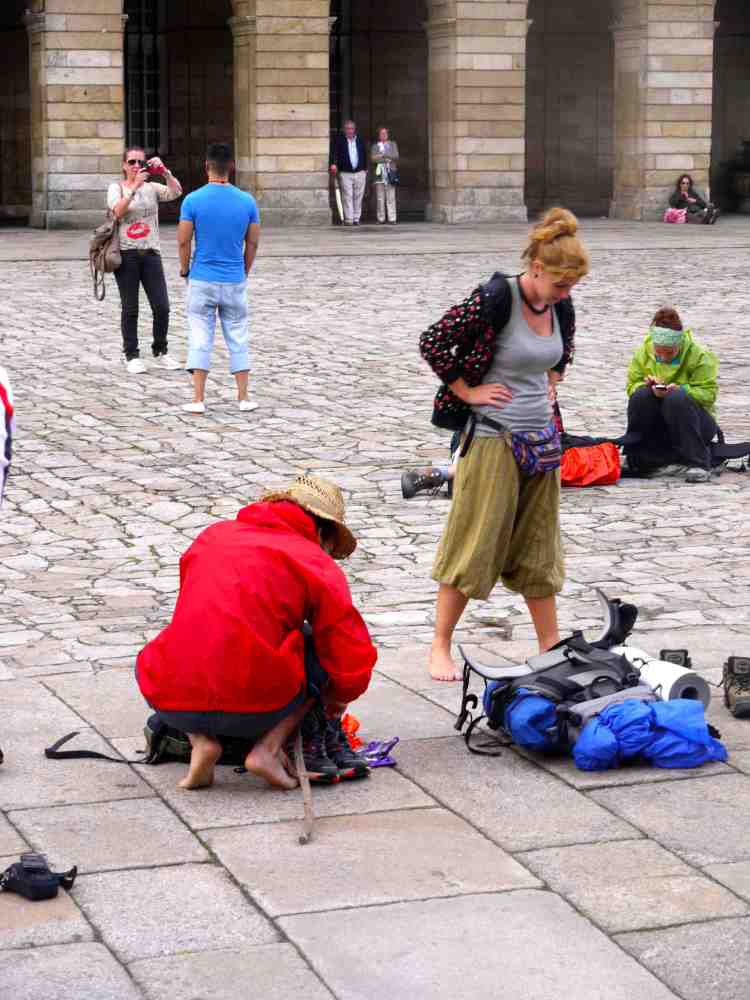 …although boots are not necessarily always the main issue… 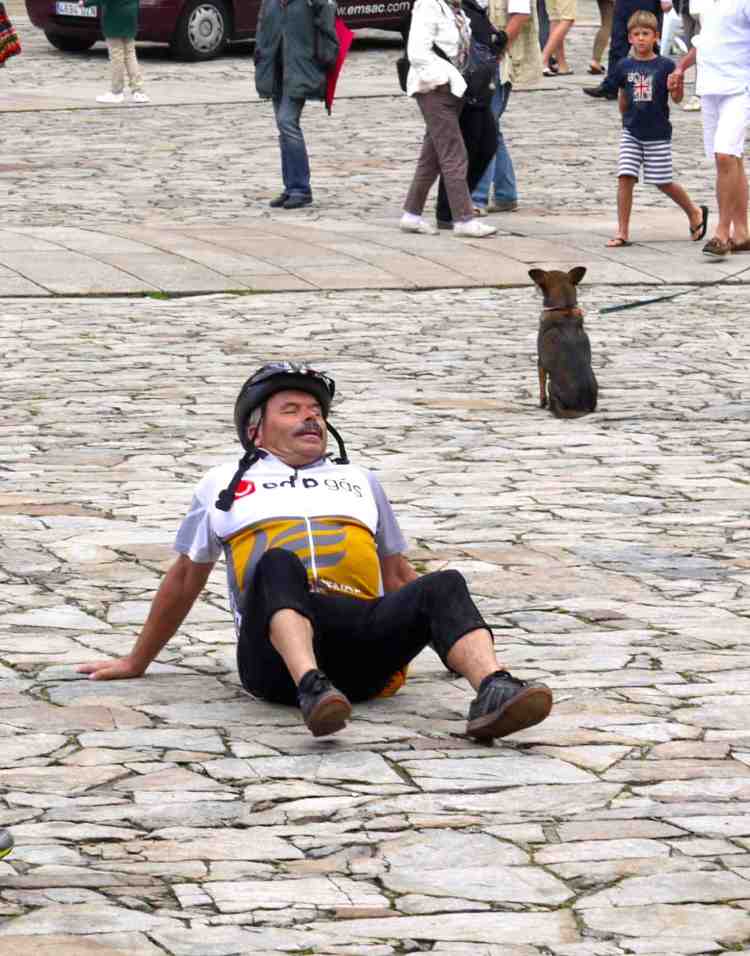 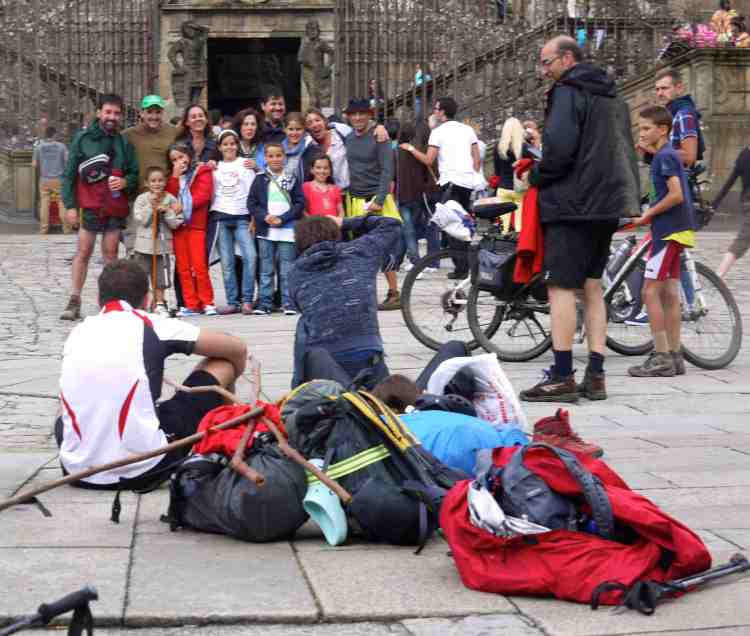 …and there are also some pretty clear examples of the physical toll this journey can take. 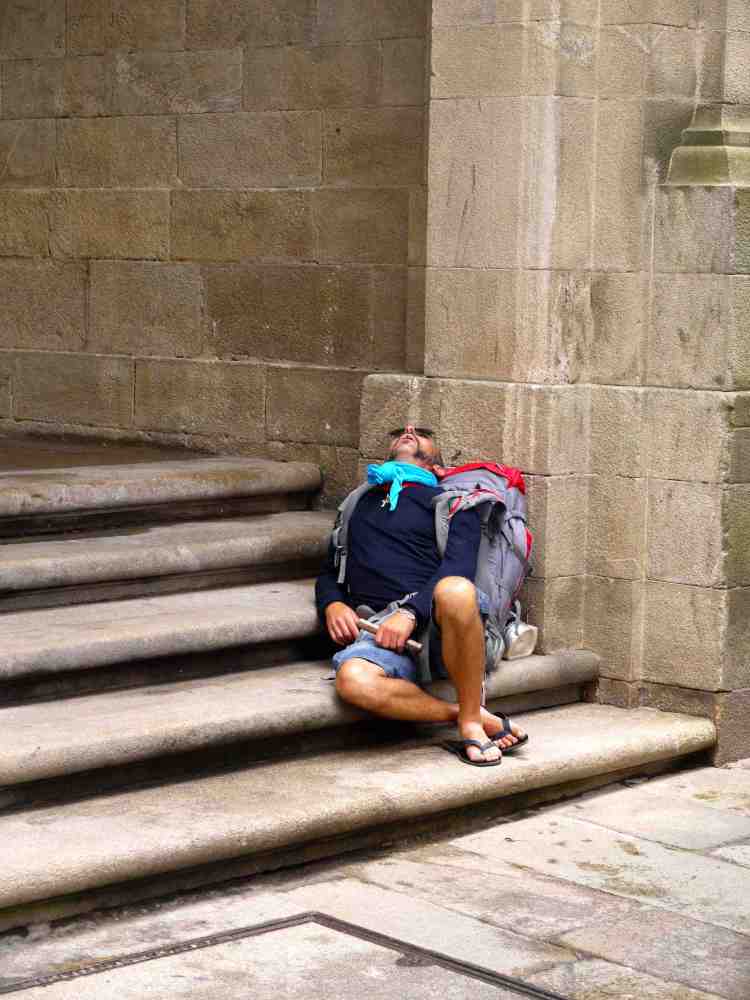 And if the number of travellers on this journey were conspicuous by their absence the night before, they certainly came out of the woodwork for the service devoted to peregrinos in the Cathedral that morning. 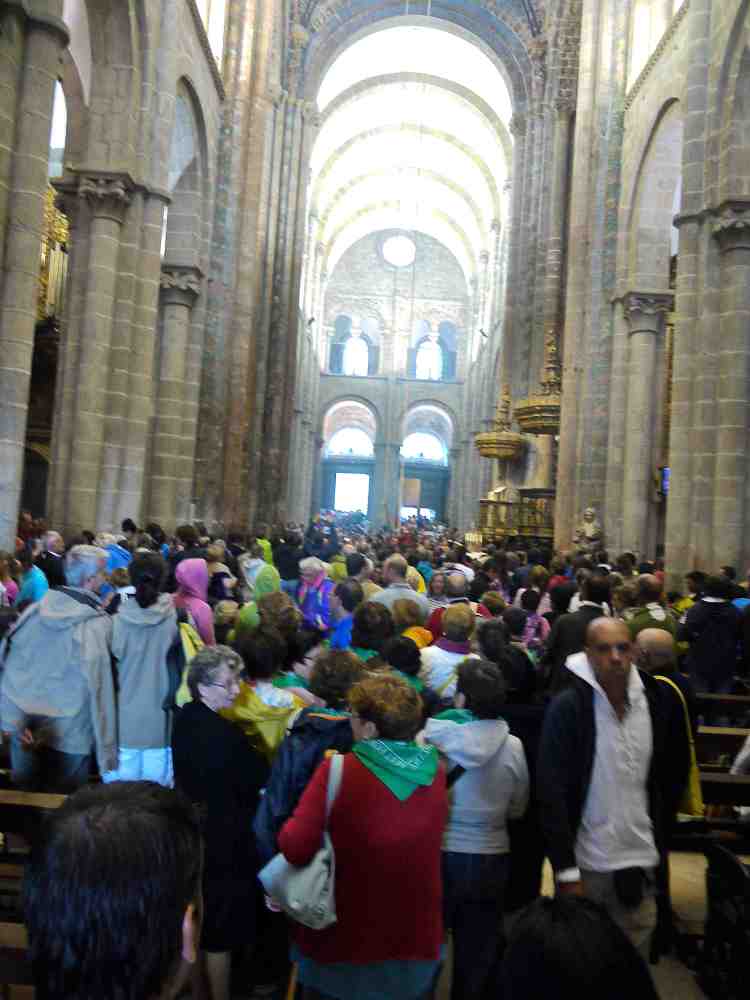 Again, there’s no real way of visually communicating the sheer numbers in attendance, so I’ll just have to tell you that there must have been at least 2000 people there.

I hope the video of the end of the service that I’ve posted as today’s header loads OK – if it does, again it will only give you a small hint of the drama of the whole thing. And if it doesn’t, I’m afraid today’s headline won’t make much sense.

And so here it all ends.

My Credencial has managed not to fall apart completely, and with a few sneaky additions along the way at various hostelries over the last three days, I managed to fill the whole thing up (not mandatory, but I know those blank spaces would’ve bugged me if I hadn’t done it).

Which also means that I’ve managed to get hold of an altogether less tatty piece of documentation that celebrates this journey – my Compostela. 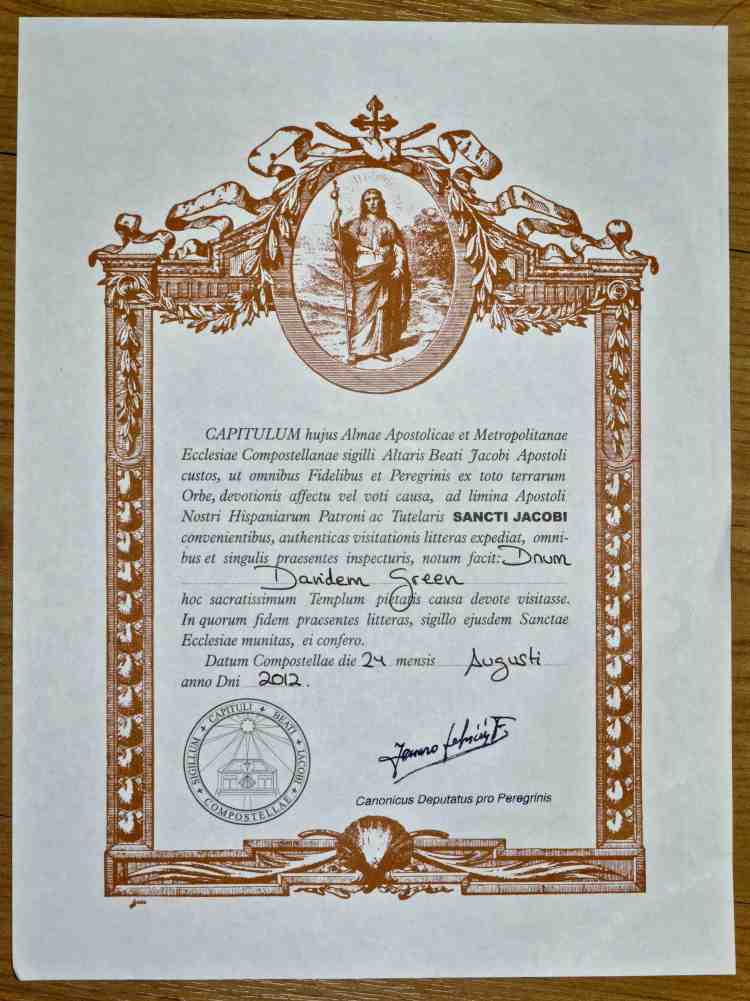 And it’s nice to have an official memento.

But there’s another bonus to possessing this piece of paper.

There’s a great tradition whereby what is seen by many as the most illustrious of Spain’s illustrious chain of Parador hotels – The Santiago Parador (obviously) – which sits on the border of the square that faces the Cathedral…. 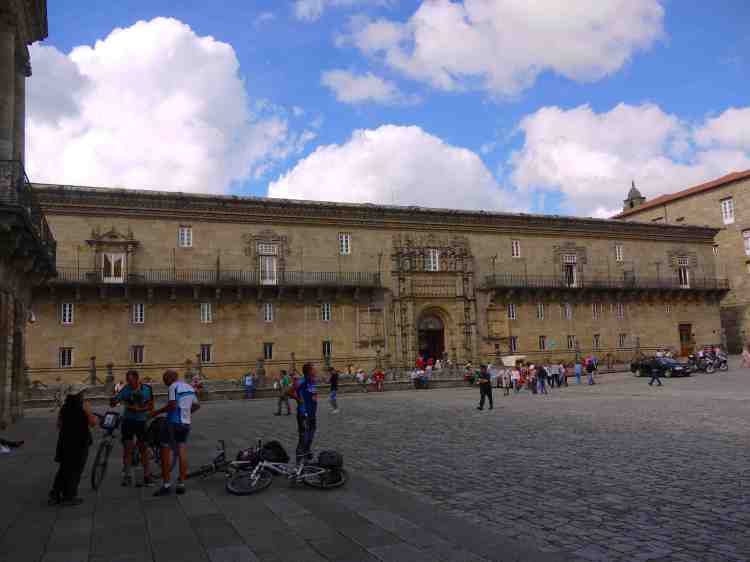 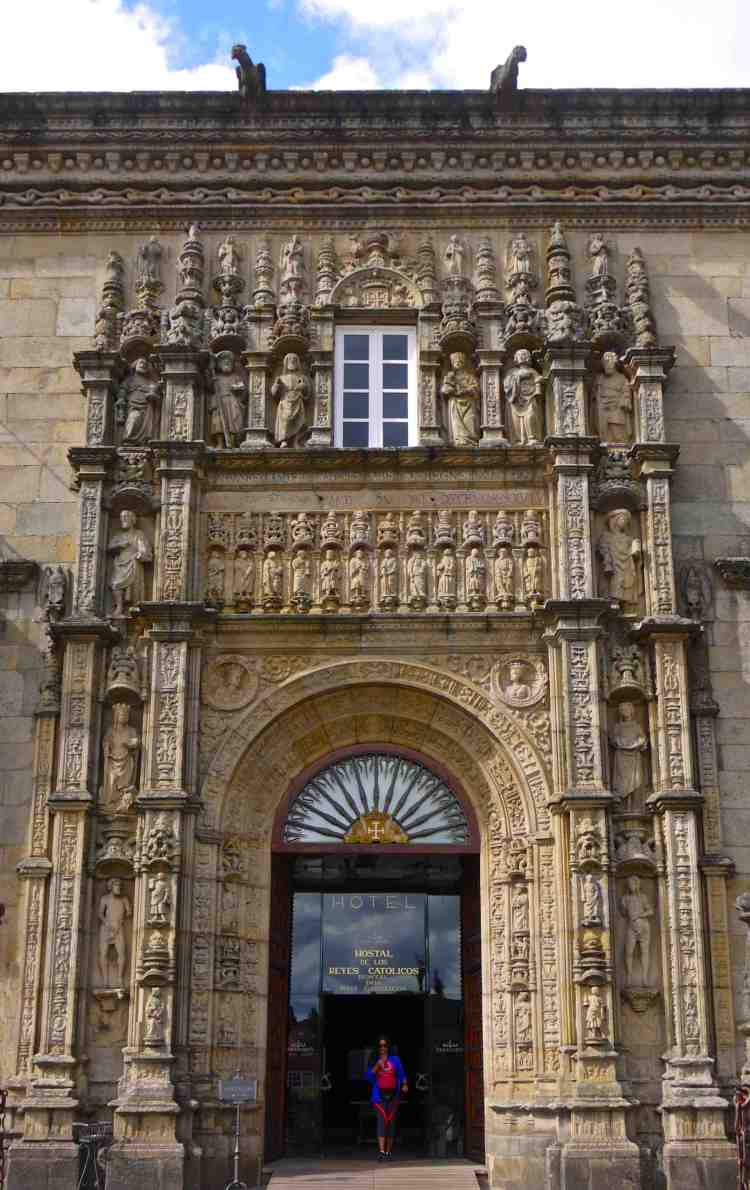 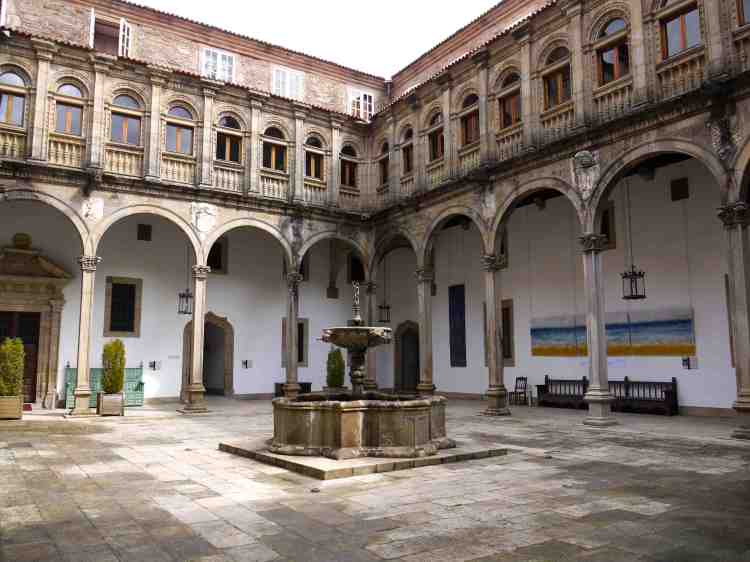 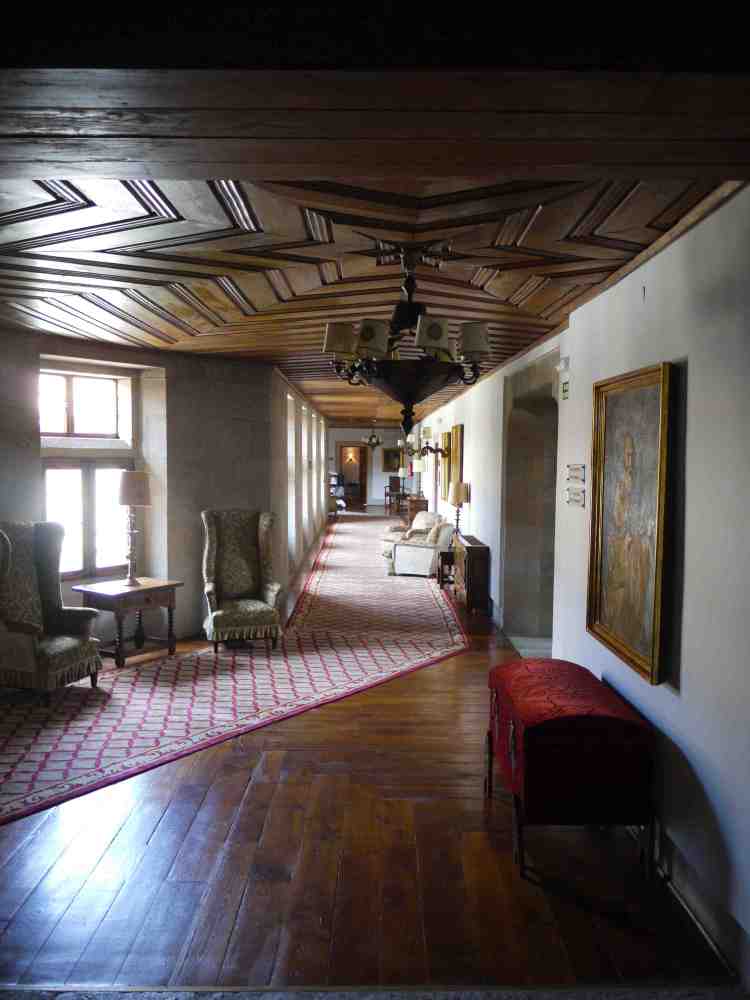 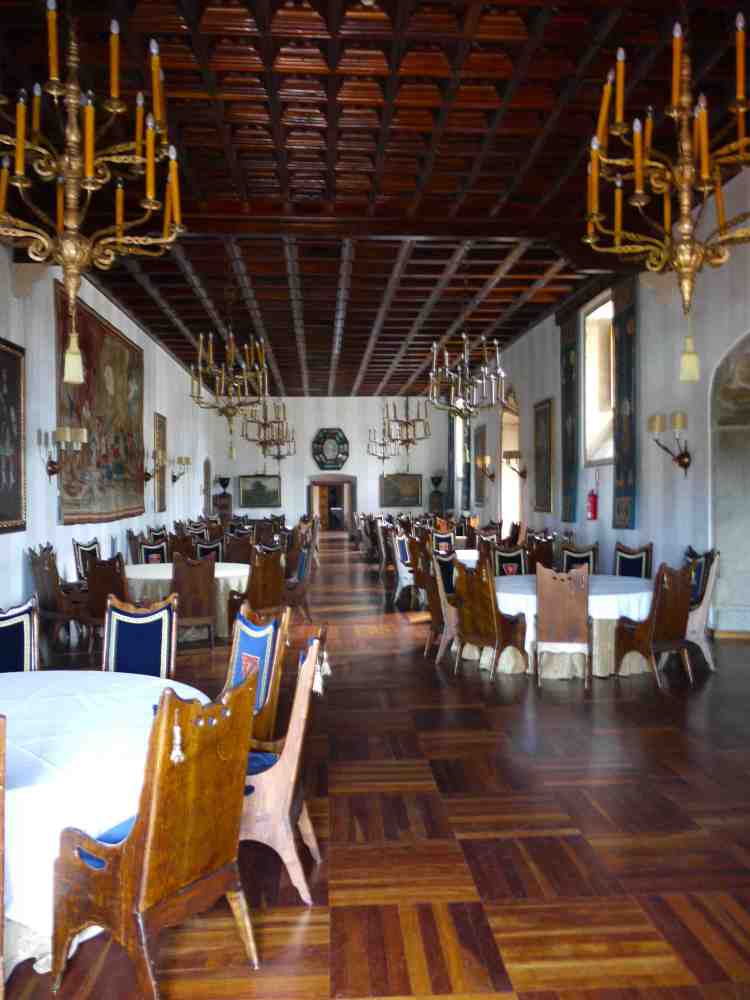 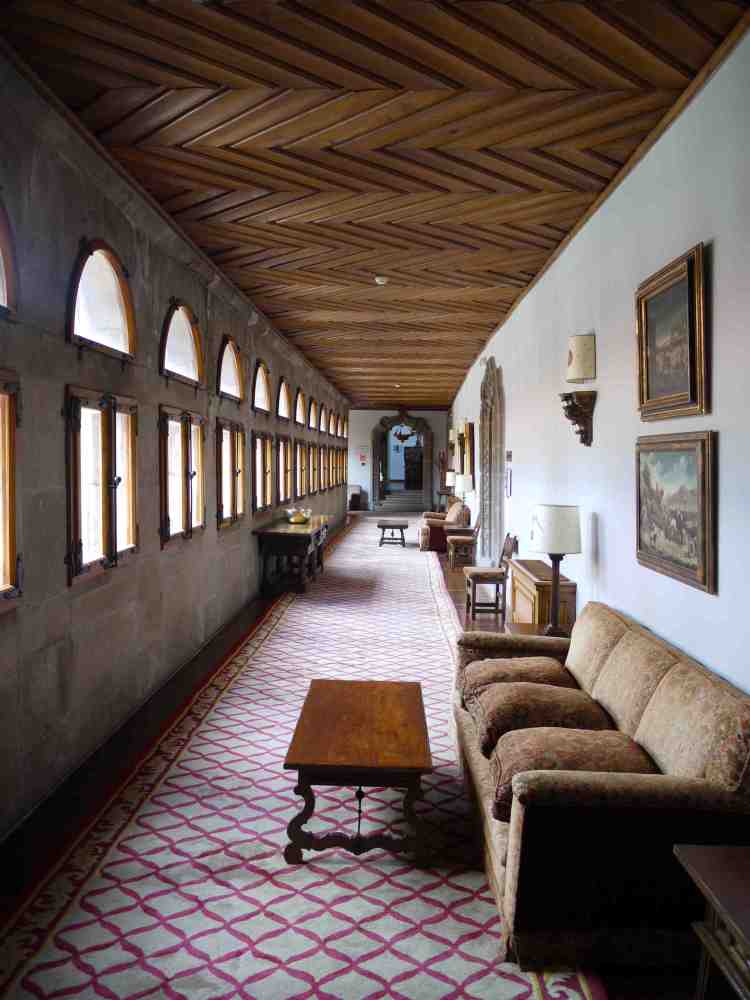 …offers a free breakfast to the first 10 peregrinos that present their Compestelas to the car park attendant the morning after they complete their journey. 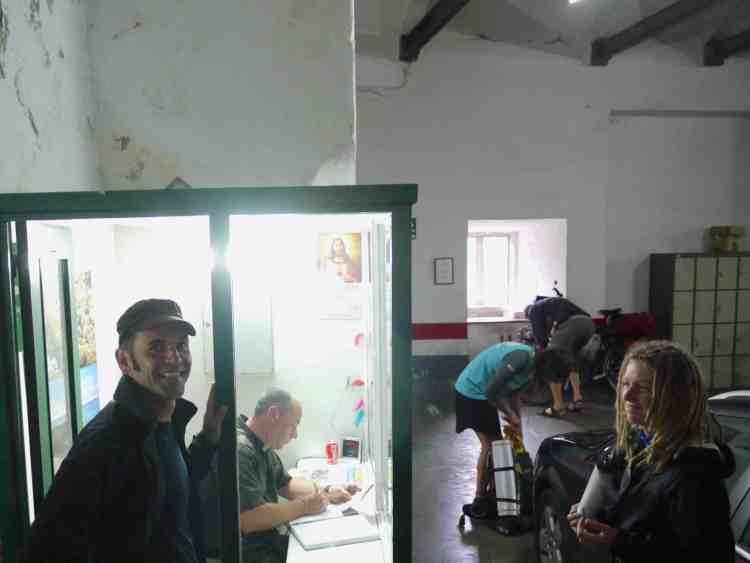 After which, those lucky few are taken into the bowels of the hotel (the kitchen), to claim their reward. 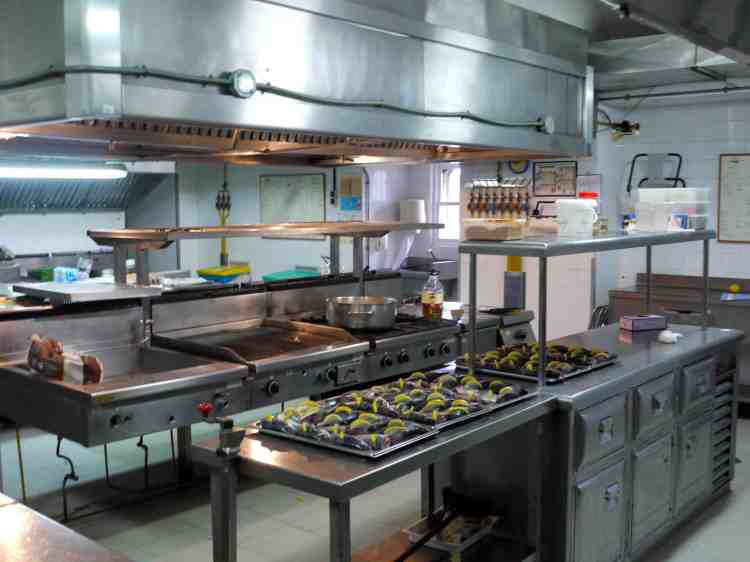 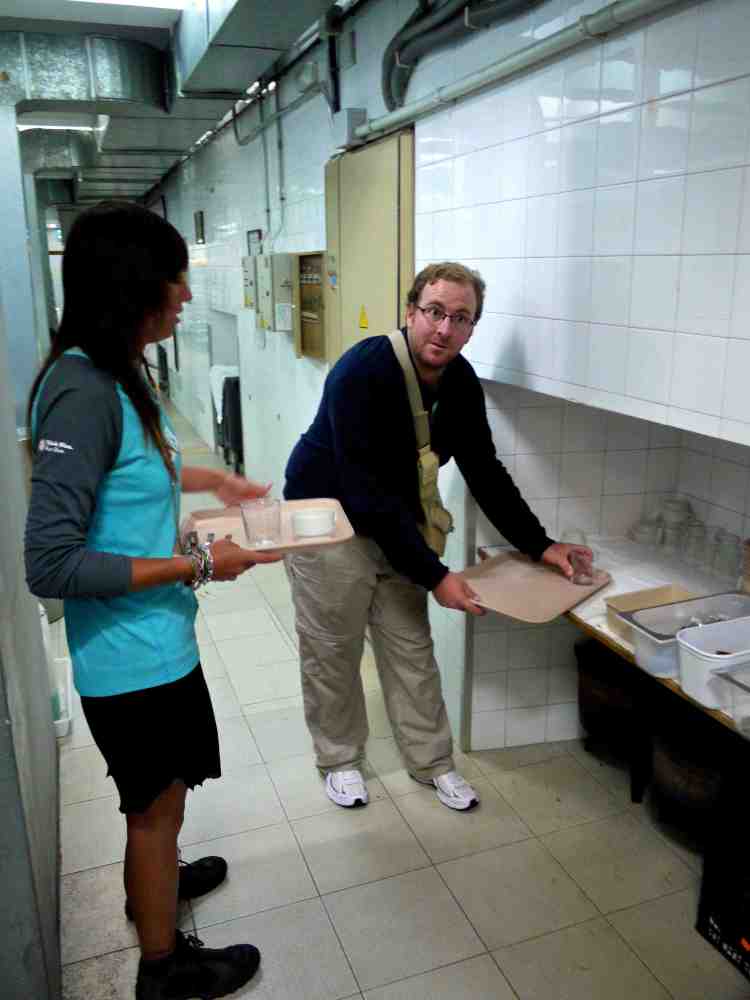 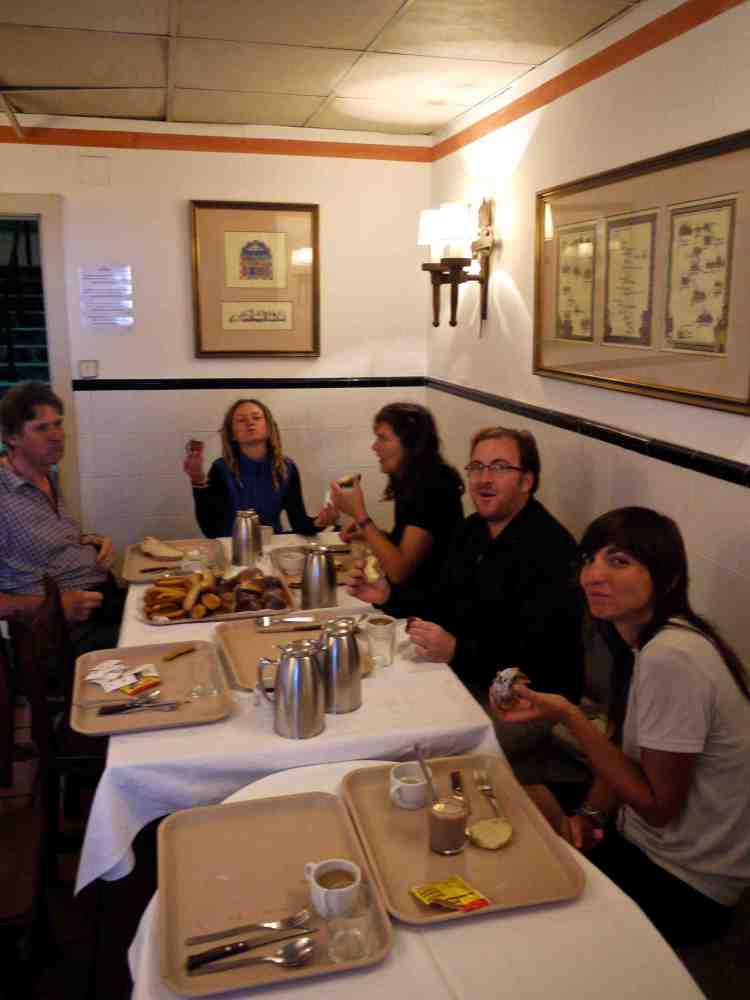 …which was all very lovely…

…but not necessarily what The Luxury Peregrino had in mind.

So he checked in for a proper breakfast. 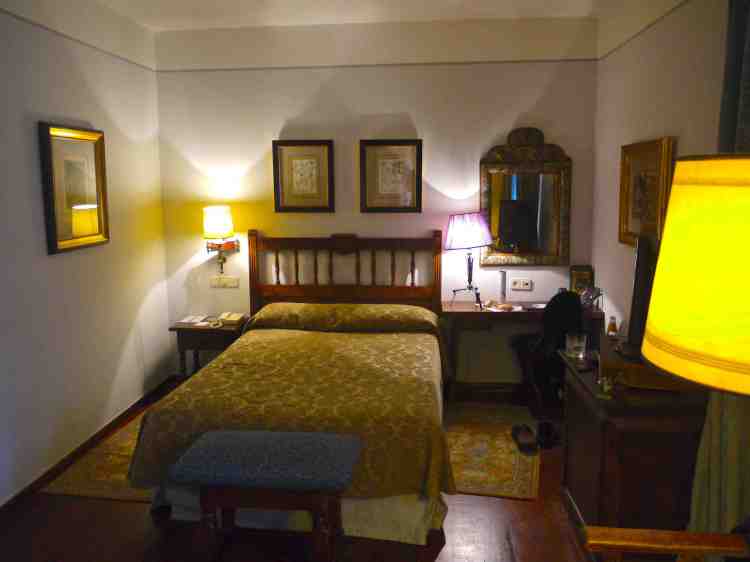 But before you judge him too harshly…

…just remember that this is where he slept last night… 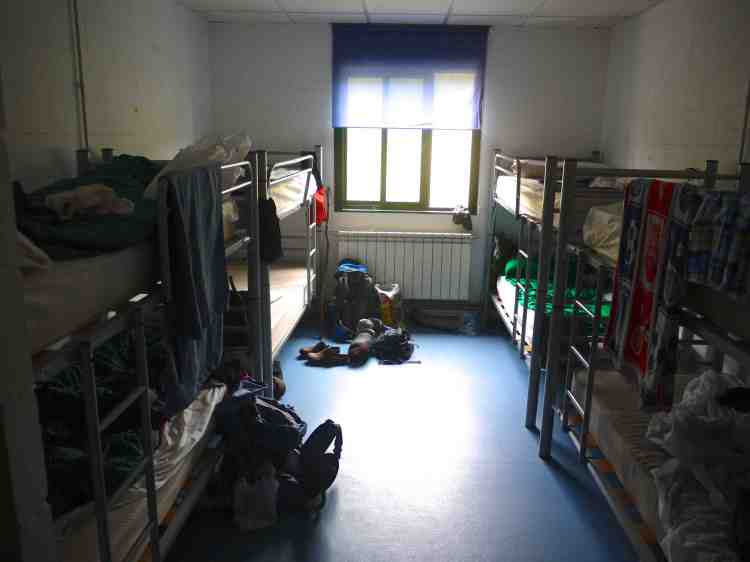 And, as they say, that’s all folks.

Thank you very much indeed to anyone who’s followed this journey – there have been loads of positive comments along the way for which I’m hugely grateful, and which have made all the difference when I’ve found myself flagging.

And I know I’ve been very lucky to have been able to do this, but there has also always been a reason for doing it.

Which is to raise as much money as possible for Rethink Mental Illness.

I’m not going to plug their work any further here, because I fully appreciate that’s not the reason you might have been following this blog in the first place.

But if you’re feeling in a charitable mood and have enjoyed the read, please do take a look at my Just Giving page and see if you feel like giving a couple of pounds, dollars, euros, yen, rand, riyal, or dirham (yes, I’m afraid to say I’ve been following the blog stats) or any other denomination I haven’t mentioned.

Thank you and goodnight x