Well, if that headline didn’t get your attention, nothing will. (Although presumably it did otherwise you wouldn’t be reading this).

I was just getting used to being The Fast Walking Blogger, when all of a sudden a new nickname got thrown into the mix.

Apparently my policy of allowing myself one hotel a week, that I mentioned in an earlier post, to recover from the rigours of dormitory sleeping surrounded by Olympic snorers has not gone un-noticed; one of the Spanish walkers that I have bumped into a various points along The Way told me over a drink that I am now known as The Luxury Peregrino.

I think it’s got rather a nice ring to it.

And I’ll happily admit that it’s not entirely unjustified, given that I haven’t stuck rigidly to my plan to play a hotel trump card once a week – in fact, it turns out that my deck seems to have a quite a healthy selection of trump cards in it.

But in my defense, on several occasions there hasn’t been much of a choice, given that the Albergues provided for peregrinos have already been full by the time I arrived at the end of a day’s walking.

Which does beg the question: what do the other peregrinos do who are stuck for a bed for the night but are not quite as much of a spendthrift than me?

Let me show you: 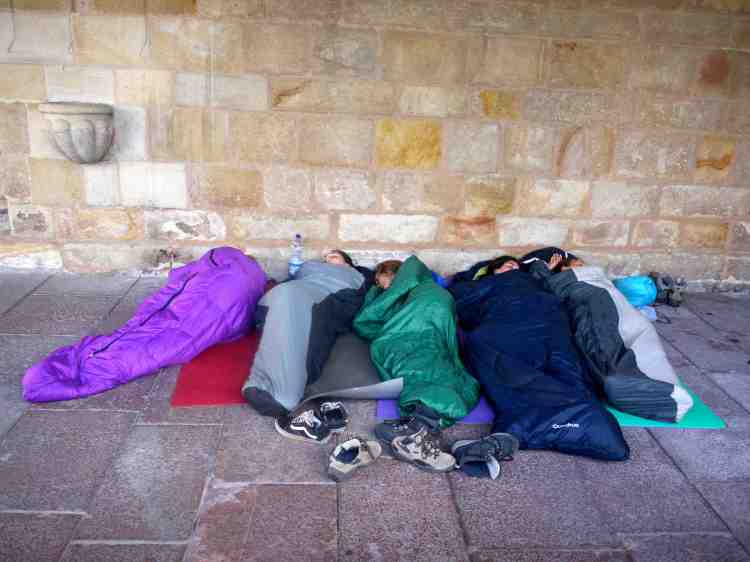 Anyway, yesterday morning it would seem that I might finally have got my comeuppance for my extravagance. After my brief encounter with the wing mirror, I thought I deserved a little pampering and checked into a pension for the night (any excuse).

I had also come to the end of my three-day cycle where I have to wash all my clothes in preparation for the next three days and, frankly, they were starting to hum. But whilst one of the fringe benefits of staying in a pension is usually that you can have your clothes washed for you, it turned out this service was not available where I was staying.

On explaining my predicament to the waiter at dinner, he shiftily offered (shifty sounds the same in any language) to do my washing for me himself as long as I didn’t tell the boss and bunged him a couple of Euros or ten. Which I happily agreed to on the understanding that he delivered them back to my room dry by 11pm as I wanted an early night to get a fresh start for the next day’s planned 32km hike to Sebrayo.

Come 11pm there was a knock on the door, and the waiter handed me back my clothes. Soaking wet. Despite the language barrier, I think he got the gist of my reaction and promised to dry them and leave them outside my door ready for my planned 6.30am departure. And they were outside the door at 6.00am, but still on the decidedly wet side of damp, and by which time he was long-gone.

Now, walking in damp shorts and t-shirt is fine. In this heat it happens naturally. But walking in damp socks is simply a non-starter when you’re walking these kinds of distances every day, unless you want an excuse to leave the Camino early.

So I can now add a new one to the list of firsts that I mentioned in the last post – I spent the next hour and a half trying to dry one pair of socks over an exposed light-bulb, attempting to judge the right amount of time to leave them on the glass before they got singed.

It also explains today’s photo header. I spent the best part of the morning rotating my various items of wet clothing on the back of my rucksack to dry in the sun.

Anyway, the delay to the start of yesterday’s walk was particularly galling, given that it turned out very quickly to be extremely hot. Heat haze hot. 34 degrees hot, to be exact.

And it was one of the least visually rewarding sections that I have walked so far – for what seemed like a very long time, it looked a lot like this.

And whereas other sections of the route of the route are walked in utter silence, on this stretch, the hum of the motorway never seemed too far away.

Which is largely why I didn’t take very many photos yesterday – that and the fact that is was too hot to really do too much other than put one foot in front of the other.

I mentioned above that I had planned to walk 32km to Sebrayo, but unfortunately things did not go according to plan. It turned out that the Albergue in Sebrayo has had to close its doors due to lack of funding, so there was no choice but to walk on an extra 7km to Villaviciosa, which after my delayed start meant that I didn’t get there until round 6.30 in the evening having walked nearly 40km in the hottest sun yet.

Which is also where the nipple chafing kicked in.

I had heard about this charming phenomenon before, but never yet had a hint of it on this trip, so had not got into the habit of applying the recommended dollop of Vaseline to said nipples first thing in the morning. Quite apart from anything else it felt just a little bit pervy. But I also resolved to put all such prejudices aside for the rest of the trip as I walked the last 3km feeling nothing so much like I had a horde of red ants tucking into my tits.

I also managed to lose my camera lead for downloading photos somewhere along the way, hence the lack of a post yesterday. Although I think it’s fair to say that I would only have been capable of spouting inane drivel at the end of that particular day.

So no change there, then.

But refreshed after an early night, I set off bright and early this morning to walk the relatively civilised remaining 28km to Gijon, my stop for  tonight, with a heavy mist offering a welcome relief from yesterday’s heat.

…until I got about half an hour out of town and suddenly remembered my resolution from yesterday, reached into rucksack for the Vaseline, only to find that I had left my first-aid kit back at the hostel. Given that I’ve also chosen my first-aid kit as the perfect place to keep my wallet, there was no choice but to walk back to the hostel, and by the time I finally got back to where I had stopped, the same scene looked like this. If anything, it was hotter than yesterday.

Thankfully, today was one of the days that my Camino mojo was back in full flow; which was just as well, as the route leaving Villaviciosa seemed like an endless uphill climb.

I’ve found it quite hard to give an idea of the kind of gradients involved in this walk through photographs, but if I tell you that this photo shows a very short section of the climb…

..from the road that runs through the middle of this photograph…

…which then turns into a slippery woodland path…. 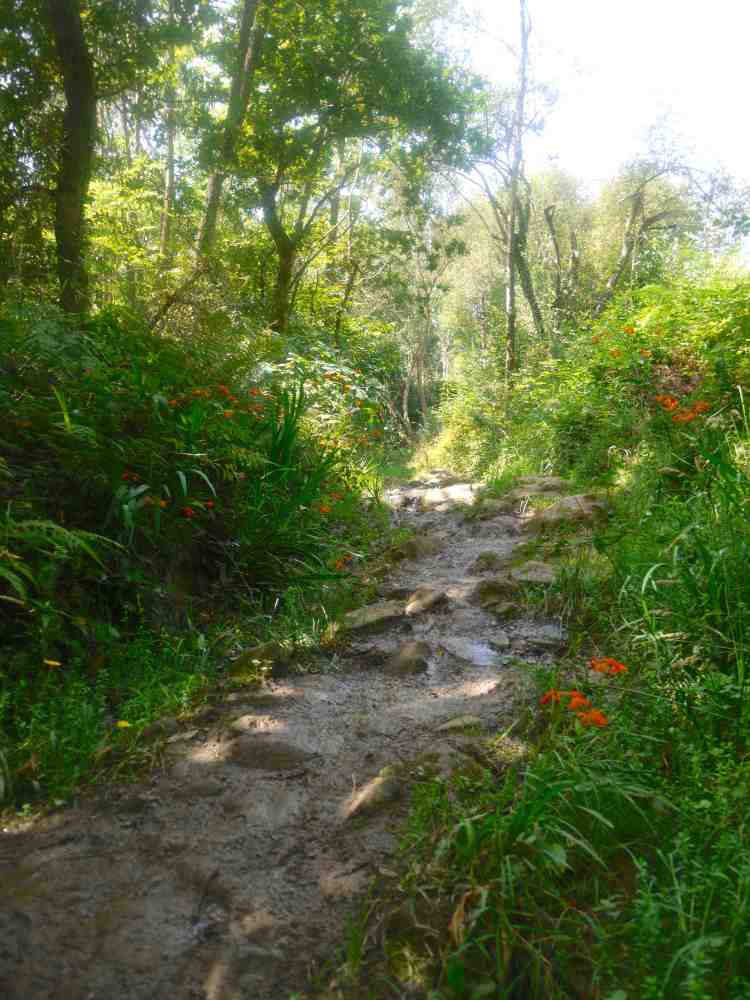 …that eventually brings you out here, you might get some idea. 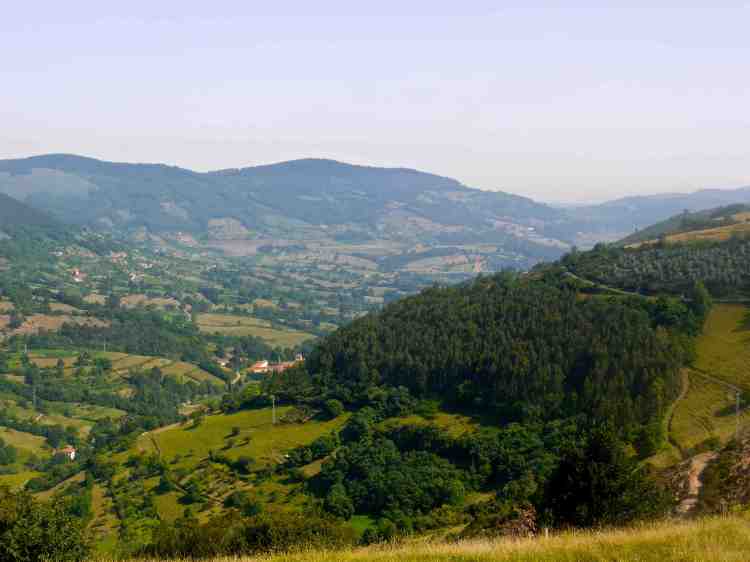 But eventually everything starts turning in a downward facing direction, and I got into Gijon at a very civilised 3.30pm, leaving me plenty of time to engage in some extended sign language sessions with shop assistants trying to explain that I need a new cable to download photos from my camera to my laptop.

As you can see, I got there in the end.