These Boots Were Made For Walking

It seems as though the idea of starting off my walks in unpromising locations is already becoming something of a theme; last time, a supermarket lift, this time the decidedly downmarket end of Hastings, the East Sussex coastal town of such historic note.

Perhaps there’s some kind of subliminal self-defense mechanism going on in the town planning department dating back to 1066 that explains the modern architectural development on the seafront. One sight of the sprawling amusement arcades and tourist tat emporiums gaudily littering the coastline would no doubt instantaneously convince any contemporary marauding forces that this was not a town worth conquering.

But Hastings is also a town of opposites. For every Crazy Cash Casino there’s a beautifully preserved tudor dwelling tucked away down a picturesque back street.

For every ‘Unforgetable’ boutique (perhaps an inspired marketing technique to make it more memorable?) there’s an old curiosity shop inviting you to while away a couple of hours amongst an eclectic array of oddities and knicknacks. And if first impressions of the town aren’t entirely thrilling,

they’re only at the service of contrasting with the stunning scenery in the immediate vicinity on this hike, which comes courtesy of Pat Bowen’s lovely book, 20 Sussex Walks (Hastings & Fairlight Glen).

Having walked it before I’ve adapted it a bit to include a mandatory breakfast of oysters and prawns (just for the protein, obviously) amongst the towering old black slatted wooden huts that are still used for drying fishing nets in the fish market in the Old Town. From there, you have the option of taking the East Hill Cliff Railway (all 267 feet of it) or walking up the exhaustingly vertiginous Tamarisk Steps which, funnily enough, are reached through a twitten (see previous post). I opted for the railway. 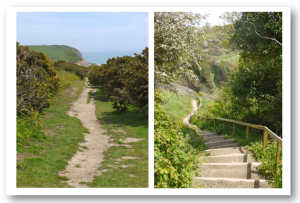 Almost immediately after walking out of the tower at the top of East Hill, it’s as if you’ve been beamed up by the mothership of the intergalactic Ramblers Association starfleet and molecularly reconstituted in a hiking theme park on Planet Street-Porter.

Even though it’s only a 7 mile round trip – double the length of the last walk, but hardly an Olympic challenge – the diversity of the route is remarkable. Starting off cutting through thick gorse hedgerow and dense thorn bushes, the path quite suddenly descends down steep wooden steps cut into the hillside, with beautiful views of the sandstone cliffs than run the length of the visible shoreline, then back up again at an incline that induces a breathing technique that any self-respecting nuisance-caller would be proud of.

It moves on through some quintessentially English woodland, obligingly dappled in sunlight throughout my walk, down to a hidden and almost deserted cove and then back beside the requisite gurgling brook, replete with mini-waterfalls, through more shaded woodland that has apparently been carbon-dated back to the last Ice Age, before emerging into more open farmland for the leisurely (mostly downhill) final leg.

Whenever you want to stop to catch your breath the route guide provides some great anecdotes about the history of the area – one of my favourites concerning a shipwreck on the rocky coast of Fairlight Cove which resulted in a large quantity of the ship’s cargo of brandy barrels being washed up on the shore; apparently when the local constabulary went to investigate the scene, they had to pick through the bodies strewn along the length of the beach to differentiate between the drowned sailors washed up from the shipwreck and the opportunists from nearby villages who had indulged a little too enthusiastically in the unexpected booty.

As for the almost deserted cove, on a fine day you don’t need the guide book to explain why it’s a fairly closely guarded secret – there’s no signposting to it from the main path – as unless you’re a bit vigilant you can find yourself clambering over a mossy rock only to narrowly avoid stepping on the crown jewels of some late middled-aged sun worshipper whose leathery tan extends rather further than the line of their Speedos, which is also more than likely to put you off your lunch. Let’s just say it’s not San Tropez.

But this was more than compensated for by the decidedly more convincing natural beauty on the return journey, the pathway being lined by throngs of bluebells and a dazzling array of other vibrantly coloured flora and fauna that made me wish I’d paid more attention in geography field trips, which might have enabled me to accurately identify and relate what they actually were.

Oh yes, and those boots. This was also the first outing for the first significant purchase I’ve made to walk The Northern Way – a pair of highly engineered and hugely comfortable Salomon Comet 3D GTX walking boots (which also manage to sound rather satisfyingly like a high performance sports car). And I’ve realised four things:

Firstly, that where I’ve previously been perfectly happy with a pair of Converse boots or wellies, depending on the weather, for anything longer than a stroll to the newsagents, I am on the brink of turning into a walking gear nerd, extolling the virtues of one brand of arch support insoles over another. (Not that my Comet 3D GTXs would ever require the assistance of anything quite so plebian, clearly).

Secondly, that I am an outdoor equipment salesman’s dream. Although I had made a firm commitment to thoroughly explore the various brands and relative merits of the most likely appropriate footwear for my Spanish trek, it must have taken all of five minutes for the salesman in the first shop I went into to convince me, without even having tried on any alternatives, that the most expensive shoes in the shop were precisely the ones that I needed for my journey.

Thirdly, that there is no doubt whatsoever that I will be continuing in this vein, ardently trying to convince Tiff that the hand carved wild olive walking stick, sourced from a remote village in Kenya and sold as a limited edition item in Claridges, is an absolutely vital aid to negotiate some of the less well-beaten tracks in the foothills of the Basque Country.

In fact, there’s a good argument for not even doing the walk and donating all the money I would have spent on hiking gear to Rethink, as there’s an odds-on chance of the total exceeding anything I might raise from anyone kind enough to support me anyway.

And finally, that there is every chance of me photographing the whole bloody lot of it.